Corroded metal infrastructure continues to be a problem, and composite materials, including new advancements in graphene nanotubes, are providing solutions.
#feature #outofautoclave #multitudeofmarkets

According to the American Iron and Steel Institute, there are about 185 million utility distribution poles in North America, and an estimated 2.5 million wood poles are replaced annually. These poles support power and telecommunications lines. Wood poles are commonly replaced due to age, damage and decay. However, fiber-reinforced polymer (FRP) composite poles were developed in the 1960s to address these shortcomings, and were first installed in Hawaii as a solution to wood pole degradation and steel pole corrosion. Composite utility poles offer the longest life, lowest maintenance, lightest weight and ability to drill for easy installation.

Before, during and after testing of composite utility poles incorporating TFP’s Tecnofire nonwovens. As evidenced through fire tests, Tecnofire will activate in the event of a fire to produce a stable insulating char and thereby ensure the structural integrity of the poles. Photo Credit: TFP

Composite poles currently account for less than 1% of the overall utility pole market according to Lucintel (Dallas, Texas, U.S.), but their share is expected to grow from $228 million in 2018 at an annual rate of 5.7% to reach $318 million in 2024. Power transmission and distribution currently accounts for approximately 71% of the global composite pole market, but lighting, which comprises 23%, is likely to experience a relatively higher growth rate, fueled by the replacement of traditional materials. In its July 2020 market report, Lucintel predicted that despite an economic downturn in 2020 due to the global pandemic, the global utility pole market will witness recovery in 2021 and reach an estimated $53.3 billion by 2025 with a CAGR of 3% to 5% from 2020 to 2025.

Composites can also play an important role in refurbishing aging underground potable water infrastructure by providing corrosion-resistant, durable and long-lasting underground pipe solutions. One example was a water project in the Middle East. The selected pipe for the project was Amiantit Europe’s (Mochau, Germany) pipe product, Flowtite Grey, which was intended for water, sewage, waste and raw material management. 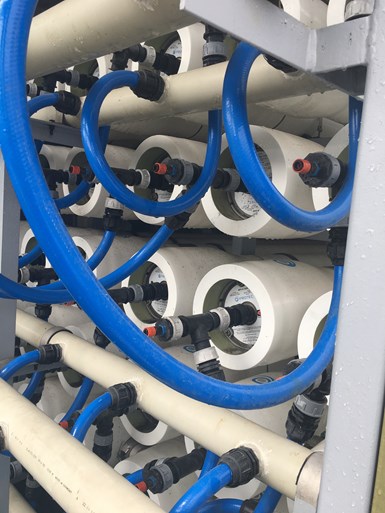 Filament wound fiberglass/polyester composites have also found broad application in several stages of seawater reverse osmosis (SWRO) desalination. SWRO plants around the world use many miles of corrosion-resistant fiberglass-reinforced polymer (FRP) low-pressure piping as a distribution network, primarily over land, to carry seawater to the plant, to distribute the potable water that is produced, to carry the brine (salt and impurities) back to the ocean and for internal plant treatment piping and energy-recovery devices. FRP also is used to fabricate storage tanks and piping used in desalination plants to contain sodium hypochlorite (NaOCl) used in chlorination of desalination process water, and for sulfuric acid.

Using fiberglass tanks to fight corrosion, however, introduces the possibility of an electrostatic charge being generated when filling or emptying tanks, particularly those containing petroleum-based liquids, because  product movement can create a static charge between the liquid and the tank wall. To address this risk, fiberglass tank manufacturers have historically used anti-static fillers in the resin, typically carbon black or conductive mica, to dissipate any static charge. But, filler ratios up to 30% are often necessary, which makes wetout of the fiberglass more difficult and slows the resin cure rate. Use of TUBALL graphene single-wall carbon nanotubes supplied by OCSiAl (Leudelange, Luxembourg and Columbus, Ohio, U.S.) can provide electrostatic discharge (ESD) protection by dissipating electrostatic charge inside and outside a storage tank.