High-pressure gas storage vessels represent one of the biggest and fastest-growing markets for advanced composites, particularly for filament wound carbon fiber composites. Although they are used in self-contained breathing apparatuses and provide oxygen and gas storage on aerospace vehicles, the primary end-markets for composite-reinforced pressure vessels are bulk transportation of compressed natural gas (CNG) products, and fuel storage in passenger cars, buses and trucks with powertrains dependent on CNG and hydrogen alternatives to gasoline and diesel.

Pressure vessels are organized into one of five types:

Of these four vessel types, Type 1 has, by far, the largest market share at >90%. Type II vessels have about 4% market share, followed by Type III and Type IV, with Type V — a new designation — a distant fifth. However, in terms of material use, composites are the fastest growing material type, with 5.9% CAGR, according to Grand View Research.

Demand for alternative fuels is growing, in large part, because the extraction of natural gas from shale reserves has contributed to lower prices in North America and parts of Europe. In the North American market, for example, the cost of natural gas fuels currently runs about 36% less than diesel, per diesel gallon equivalent. In addition, increasingly stringent emissions regulations, including the EU Euro 6 Standard, which became effective earlier in 2016, are making diesel-powered buses and commercial vehicles more expensive for operators. Impending regulations are improving the marketability not only of CNG but also of hydrogen — after a period of relative dormancy — for fuel-cell powered vehicles. 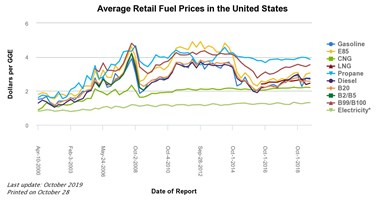 By 2023, the NGV population could be more than 65 million trucks, buses, and fork-lift vehicles. Based on strong demand in Argentina, Brazil, China, India, Iran, Italy and Pakistan, NGV deliveries could reach nearly 11 million per year by 2023. The vast majority (94%) of these NGVs are expected to be equipped with high-pressure (200+ bar) fuel storage systems.

At CW’s Carbon Fiber 2017 conference, Chris Red of Composites Forecasts and Consulting LLC (Mesa, Ariz., U.S.) predicted that the demand for carbon fiber in composite pressure vessels will grow from 5.4 metric tonnes (MT) per year in 2016 to 26 MT/yr in 2021 and 45 MT/yr by 2025. At this 2025 volume, composite CNG and hydrogen cylinders for fuel cell vehicles (FCVs) will consume almost as much carbon fiber as projected for wind turbine blades, 50% more than forecast for automotive, rail and other ground transportation chassis and body components, and twice what is estimated for aerospace. Red cited forecasts for 2.1 million hydrogen FCVs to be produced from 2016 to 2025, corresponding to 3 million pressure vessels. Hexagon Composites is a leading manufacturer pressure vessels, producing composite hydrogen storage tanks for cars and light vehicles in Raufoss, Norway, and Kassel, Germany, and tanks for its mobile pipeline system as well as for medium- and heavy-duty trucks and buses in Lincoln, Neb., U.S. It has vertically integrated through a merger with Agility Fuel Solutions (Costa Mesa, Calif., U.S.), sending tanks from Lincoln to Salisbury, N.C., U.S., where they are integrated into complete alternative fuel systems and installed on trucks and buses. Hexagon composite hydrogen storage tanks are also used on boats, ships and rail vehicles, as well as in stationary power systems, and are now being investigated for aircraft.

In 2019, Agility Fuel Solutions announced it will supply 12 Type IV hydrogen fuel systems for Solaris Urbino 12 buses to be used in Bolzano, Italy. The developer of this new bus model, Solaris (Owińska, Poland), says it has reduced the mass of its bus fuel system by approximately 20% compared to the previous model. 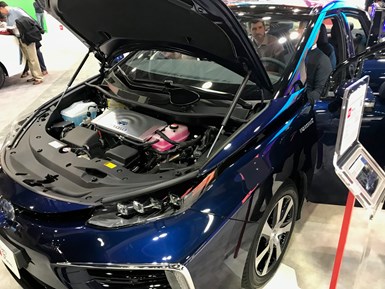 Currently, 13 automotive OEMs have fielded FCV demonstrators and test fleets. Further, at the 2019 North American International Auto Show (Detroit, Mich., U.S.), Toyota exhibited its new Mirai fuel cell electric vehicle (FCEV), which is currently on the market and for sale. It offers 67 mpge fuel efficiency, a range of 312 miles and has a manufacturers suggested retail price (MSRP) of $58,500.

Linerless, all-composite pressure vessels, which fit the more recent and radical Type V classification and are best able to reduce mass in weight-sensitive applications, are the goal for a number of pressure vessel manufacturers. Infinite Composites Technologies (ICT), Tulsa, OK, US) offers one of a growing number of Type V vessels coming to market. The company’s patented infinite composite pressure vessel or infiniteCPV (iCPV), an all-composite design, enables users to take advantage of the maximum fuel storage capacity by reducing vessel weight. The iCPV provides 10% more usable volume and reduces vessel weight by 90% compared to conventional vessels. While the company has a focus on developing next-generation fuel storage and delivery systems for natural gas vehicles and storage applications, it also hopes to introduce its Type V tank technologies to the commercial space industry.

A growing and likely huge, sustainable market for pressure vessels is the construction of seawater reverse osmosis (SWRO) desalination plants. SWRO depends on membrane systems that serially cleanse water piped onshore from the ocean (See “Utility Infrastructure”). These membranes must be encased in membrane housings. Filament-wound fiberglass pressure vessels are used almost exclusively for this purpose today, in quantities of as many as 6,000 per desalination plant. The Freedonia Group (Cleveland, Ohio) predicts demand for SWRO housings and related equipment will increase 6.9% per year. In the US alone, the market was worth about US$495 million in 2017.