Composites continue to play a critical role in onshore hydraulic fracturing, and thermoplastic composites are on the rise for deepwater pipelines.
#multitudeofmarkets #windblades #cuttingtools

Not surprisingly, inherently corrosion-resistant composite materials are increasingly used to mold previously metal parts deployed in a host of offshore oil and gas drilling applications. Oceans are Earth’s largest naturally occurring corrosive environment, thanks to salt in seawater. Combined with man-made multipliers such as high temperatures and pressures and the host of aggressive chemicals, solvents and other fluids required to operate an offshore oil rig, and that’s a recipe for conditions that, over time, can be corrosive to almost any material — especially metals.

Composite oil and gas parts include non-load-bearing topside platform components, such as fire-water mains, high- and low-pressure tubing, processing vessels and tanks, fire-blast panels, gratings and handrails, as well as newer subsea structures, such as carbon fiber rod umbilicals and components for protecting wellheads, manifolds and other 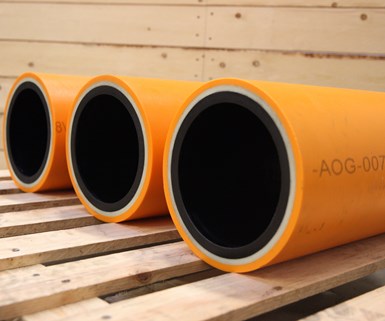 equipment related to subsea processing. Composites also are making inroads into higher volume, more demanding offshore oil and gas applications, such as the systems of pipes with which producers explore for oil, find it and eventually bring it up from the wellhead to the surface. Although many are still in development — a process that includes a lengthy and rigorous qualification phase — the impetus behind this R&D is significant. The question is not if but when offshore oil operators will be compelled to make greater use of lightweight composites in structural undersea pipelines. This question is all the more critical as exploration companies develop subsea oil fields at greater distances from shore, and do so at unprecedented depths. In 2003 in the Gulf of Mexico, for example, only 35% of production was from wells at depths of more than 300 meters. By 2015, that figure was 95%. More to the point, more than 20% of Gulf wells are now at depths greater than 2,000 meters. At these depths, traditional steel pipe systems pose serious logistical problems and tally huge costs. 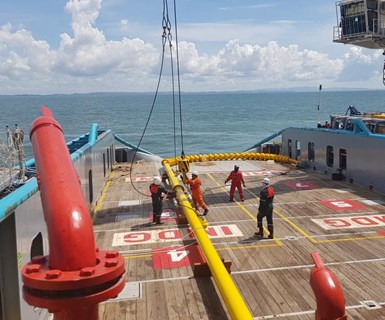 Magma Global Ltd. (Portsmouth, U.K.) and Airborne Oil & Gas (AOG, Ijmuiden, Netherlands) are leading the way for development and qualification of thermoplastic composite pipe (TCP) for deep-sea applications, including a number of successful qualifications and pilot programs in 2018.

In June 2019, Airborne Oil & Gas announced the successful completion of its first thermoplastic composite pipe (TCP) based on carbon fiber-reinforced polyvinylidene difluoride (PVDF)﻿ polymer. The company says this pipe provides a solution that doesn’t corrode, is resistant to CO2 and hydrogen sulfide (H2S), and is lightweight and spoolable, with a small bend radius. In 2019, several projects to qualify and build TCP deepwater risers, downlines or flowlines were announced, in Brazil, West Africa, Norway and more.

Onshore, a composites-aided technology called hydraulic fracturing, often termed “fracking” or “frac’ing,” has been enabling the U.S. to increase its onshore oil and natural gas extraction over the past decade. The process artificially fractures low-permeability rock strata with explosives and then injects pressurized, sand-laced solutions into those fractures to facilitate oil and natural gas extraction. Each wellbore requires 10-40 multi-component tools called “frac plugs” (and accompanying “frac balls”) to stimulate multiple oil- or gas-producing layers, or “stages.” These critical parts are typically made with composites.

In 2014, it was estimated that demand for these downhole parts exceeded more than 20,000 parts per week. Reportedly, in 2016, hydraulically fractured horizontal wells accounted for 69% of all oil and natural gas wells drilled in the US﻿ — about 670,000 of the 977,000 producing wells were hydraulically fractured and horizontally drilled. ﻿According to the U.S. Energy Information Administration (EIA, Washington, D.C.), in 2018 the total number of active oil and gas rigs working to drill new wells in the U.S. averaged 1,013, keeping the total count for 2018 on track to be the highest since 2014. As of July 2019, the number of active crude oil and gas rigs in the U.S. had reached 1,297. Alongside wind energy, the EIA predicts that natural gas will be the fastest-growing source of U.S. electricity generation in 2020.