The markets: Fuel cells and batteries (2021)

Although fuel-cell powered vehicles could still be in the automotive future, growth will be measured and so will the market for composite components. Composites for electric vehicle battery packs and hydrogen tanks for fuel cell vehicles will be the more immediate opportunity.
#discontinuousfiber #toyota #spreadtow

The market for hydrogen fuel cells has turned a corner with the COVID-19 pandemic — multiple governments have increased funding as part of recovery initiatives for regional economies and the New Green Deal to reduce global CO2 emissions. This funding has spurred hundreds of research projects and implementation initiatives in a wide array of transportation and stationary applications, including combined heat and power (CHP).

Fig. 26. Aggregate deployment plans for the FCH applications of participating regions (46 respondents), from “Fuel Cells and Hydrogen for Green Energy in European Cities and Regions” by Roland Berger (September 2018), sponsored by the 175 stakeholders of The Fuel Cells and Hydrogen Joint Undertaking (FCH JU). Photo Credit: Roland Berger for FCH JU

According to a June 2020 analysis by the International Energy Agency (IEA), hydrogen use in transport is expanding more quickly than ever, but still accounts for just 0.5% of new low-carbon vehicle sales. However, the global fuel cell vehicle (FCV) stock nearly doubled in 2019 to 25,210, while new vehicles sold more than doubled: 12,350 up from 5,800 in 2018.

There are also opportunities in non-transportation sectors including decarbonizing energy use for industry and local electrical power. The U.K. is exploring the possibility of converting its natural gas grid to H2 with its ongoing North of England H21 project, due to begin in 2028. Residential and commercial heating and cooling accounts for about 40% of final energy demand in Europe.

Bipolar plates, a key component of proton exchange membrane fuel cells, can be made with metals or carbon fiber composites, but companies such as Ballard Fuel Cell Systems (Bend, Or., U.S.) prefer composites because they offer superior durability at lower cost. Photo Credit: Ballard

Carbon fiber composites can be used in bipolar plates, gas diffusion layers, end plates and other system components of proton exchange membrane fuel-cells (PEMFC). In the past, thermoset materials were thought to be limited to lower volume and stationary applications, due to their longer mold cycle times, higher scrap rates and an inability to produce molded composite plates as thin as stamped metal plates. More recently, however, these issues have been overcome, providing a clear advantage for composites over metals in high-temperature and low-temperature PEMFCs where power density is a secondary requirement.

Chopped carbon fiber and graphite-filled/vinyl ester bulk molding compounds (BMCs) are finding wide use in bipolar plates for low-temperature PEMFCs. BMC cost has declined significantly as volumes have increased. Similarly, molding cycles, once measured in minutes, are now routinely completed in seconds, due to formulation improvements and the ability to make thinner plate cross-sections.

Composites in structures and tanks

Toyota Motor Corp. (Tokyo, Japan) began selling its Sora fuel cell bus in March 2018, and launched an updated version in August 2019. According to a May 2020 announcement, Toyota will supply 100 Sora fuel cell buses for the Olympic and Paralympic Games, now rescheduled for summer 2021. Teijin Carbon (Tokyo, Japan) announced it has developed a multi-material roof cover for the Sora, comprising carbon fiber composites, aluminum and engineered plastics. The part is manufactured in one piece with complex shapes and is suitable for mass production. 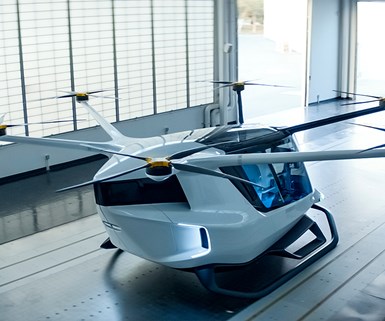 Hydrogen-powered fuel cells are also being developed for aircraft, with prototypes launched in 2019 by Alaka’i Technologies (Hopkinton, Mass., U.S.) and ZeroAvia (Hollister, Calif., U.S.). The Skai, developed by Alaka’i, features a carbon fiber composite airframe and landing skids, and is said to be the first eVTOL powered entirely by hydrogen fuel cells.

Meanwhile, ZeroAvia  is flying a Piper Malibu refit with carbon fiber composite hydrogen tanks and will soon begin flight testing a similarly modified twin-turboprop, 19-seat Dornier Do 228 per its roadmap to certify a 20-seat, H2-powered aircraft with a 500-mile range by 2023. 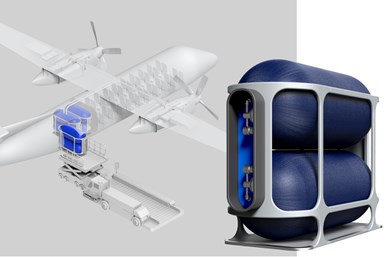 Universal Hydrogen (Los Angeles, Calif., U.S.) is a start-up aiming to be an enabler of hydrogen-powered aviation by providing the necessary fuel modules and refueling infrastructure. The first modules it has developed are for the 50-seat Dash 8 and ATR turboprop regional aircraft. They feature 7-foot-long by 3-foot-diameter tanks to hold H2 gas at 850 bar. The tanks comprise an impermeable polymer liner wrapped with layers of dry carbon fiber braid and a Kevlar aramid fiber protective outer layer. Each module contains two such tanks within a lightweight, structurally-optimized composite frame that also lends impact resistance and some load-bearing capabilities. “There is no need for resin,” explains Universal Hydrogen CTO J.P. Clarke. “The liner addresses permeability, while the carbon handles the hoop and axial loads and the outer layer plus frame prevents damage; thus weight and thickness are reduced.” 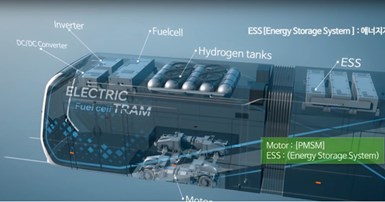 Fuel cells and hydrogen power are also being developed for fast ferries and trains. According to a Sept. 2020 announcement, ResearchAndMarkets.com estimates the market for hybrid electric trains (Electro diesel, battery, hydrogen, CNG, etc.) at 4,904 units in 2020, growing at a CAGR of 5.5% to reach 8,389 units by 2030. In a 2019 report, Ballard Fuel Cell Systems (Bend, Ore., U.S.) states that fuel cell trains will play a key role in the transition to a zero-emission economy, replacing 30% of current diesel trains and comprising 20% of new rail vehicles in Europe by 2030. The largest market will be multiple unit trains such as those used for commuter and intracity passenger rail, as well as light rail and trams. Fuel cell hydrogen units have been shown to perform as well as diesel units at a similar cost while removing the need for expensive overhead line equipment. These trains are typically powered by an electric motor, at least one fuel cell, 4-5 hydrogen storage tanks and an energy storage system such as batteries. There are currently hydrogen train projects in Germany, the Netherlands, Austria, China, Japan, Korea and the U.K.

Even as hydrogen fuel cells gain momentum, the automotive industry continues to put more of its eggs in the battery power basket. Composites are helping to offset the heavy weight of batteries via lightweight battery enclosures. 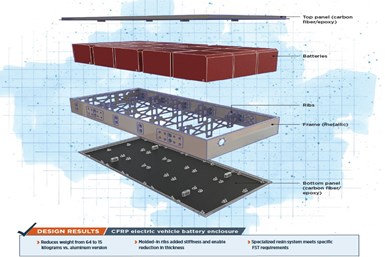 One example is the CFRP enclosure developed by TRB Lightweight Structures (Huntingdon, U.K.) for a fleet of electric buses. Each bus features up to six, 74-kilowatt (KW) batteries, each weighing 550 kilograms, including the battery enclosure. To meet overall weight requirements, however, the enclosure needed to be just 15 kilograms — a significant reduction versus the previous aluminum version’s 64 kilograms. To meet additional requirements, including manufacture in the U.S. and production of 40,000 units/year, TRB constructed a purpose-built manufacturing facility in Richmond, Ky., U.S., in a joint venture with Toyota Tsusho America (New York, N.Y., U.S.). Here, the 2-meter-by-1-meter battery box is made using high-areal weight carbon fiber fabric, prepregged in-house with a 2-minute cure epoxy resin. The prepreg is immediately cut and placed into a matched metal tool by automated pick and place robots for fast press cure (FPC) processing with a cycle time of 11 minutes. The part is then robotically machined and assembled, including trimming, bonding of inserts and gasket placement. The design also includes additional plies in the bottom cover for thermal and electrical insulation and EMI shielding. Full-scale production is expected in 2021 and TRB is in discussions with other potential customers for more mid- and high-volume enclosure production.

SGL Carbon (Wiesbaden, Germany) will also begin production by 2021 of carbon and glass fiber composite top and bottom layers of a battery enclosure for a North American automaker. The high-volume application is a key part of an electric car’s chassis, meeting stringent requirements for weight, stiffness, impact protection, thermal management, fire protection, and water and gas impermeability. This contract follows the successful production of composite battery case prototypes for Chinese automotive manufacturer NIO announced last year. SGL Carbon reports potential for more orders with this manufacturer for even more substantial volumes. Meanwhile, it has a smaller volume contract from a European sports car manufacturer for serial production of composite enclosure bottom layers, which was scheduled to begin mid-2020.

Another company supplying into battery boxes is SHD Composites (Sleaford, Lincolnshire, U.K.) with its prepregs using biobased polyfurfuryl alcohol (PFA) thermoset resin that meets phenolic performance. Its PS200 prepreg meets fire protection requirements for aircraft batteries mandated by the European Aviation Safety Agency (EASA), and is already in use at manufacturers of general aviation aircraft, where simulated battery fire testing showed an inside temperature of 1,100°C, while the outside never exceeded 250°C and the battery box never burned or decomposed. Composites Evolution (Chesterfield, U.K.) also supplies PFA prepregs reinforced with flax, glass, aramid, basalt or carbon fiber, and has passed flame, smoke and toxicity (FST) testing for aircraft and rail.  ​​

Teijin Group company Continental Structural Plastics (CPS, Auburn Hills, Mich., U.S.) says it has also developed SMC materials that offer a number of unique fire resistance capabilities, including the ability to reduce or eliminate thermal runaway, and the ability to self-extinguish. The company has been manufacturing EV battery enclosures since 2012, working in conjunction with General Motors (GM, Detroit, Mich., U.S.) on the Chevrolet Spark program. 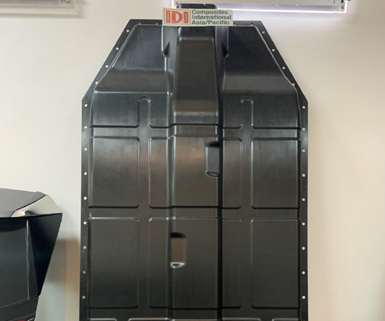 Today, CSP is in development and production of 34 battery box covers in both the U.S. and China. 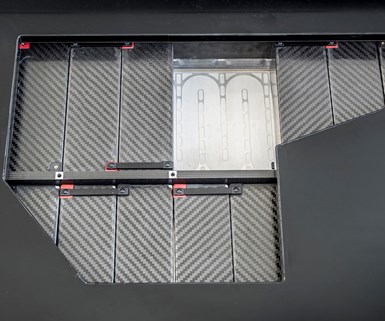 In its lightweight and scalable FW-EVX vehicle platform, Williams Advanced Engineering (Grove, Oxfordshire, U.K.), showcased structural CFRP battery box enclosures. Located within the car’s aluminum and CFRP monocoque are 38 battery modules, each 136 millimeters wide with 10 pouch-type lithium ion batteries inside. Each of the 38 battery module boxes are made using a flat CFRP sheet and the highly automated patent-pending 223 process. Portions of the sheet for the box faces are cured, leaving flexible uncured hinges in between. These allow for folding of the partially-cured sheet into a box, followed by final cure and bonding to produce a rigid enclosure. Each box is an impact-resistant, load-bearing exoskeleton, aiding in crash safety. The boxes are positioned and secured together to provide significant torsional and bending stiffness through the monocoque, which allows designers to reduce weight in other structures, increasing the vehicle’s fuel economy and performance.