A number of manufacturers in the composites industry have relatively quietly carved out a lucrative and growing share in the market for brackets, fixtures, ductwork, pallets, and other often hidden and typically less newsworthy parts that nevertheless require complex shapes, must perform at high levels and are targeted for weight, cost and production-time reductions.
#outofautoclave #weaving #layup

Although the use of composites in high-performance end markets like aerospace and automotive often receive most of the industry’s attention, the fact is that most of the composite materials consumed are applied to non-high-performance parts. The industrial end market falls into that category, and here material performance often emphasizes corrosion resistance and durability, particularly in applications involving the storage of chemicals and gases.

Indeed, composite storage tanks are proving increasingly valuable in several geographic regions. In South America, Tecniplas (Sao Paulo, Brazil) has developed a strong reputation for the fabrication of large composite storage tanks that contain everything from water to fertilizers to industrial solvents. In the U.S., Ershigs (Bellingham, Wash., U.S.) has established its own niche as a supplier of composite tanks, piping, ducts and scrubbers.

Emblematic of the type of work being done in industrial composites is Hudson Products (Hudson, Beasley, Texas, U.S.), a manufacturer of air-cooled heat exchangers and axial flow fans. The company’s fiberglass Tuf-Lite axial flow fans have been in production for more than 60 years, with more than 250,000 in use globally. The Tuf-Lite fan series got its start in 1955 with the Tuf-Lite I, featuring a glass fiber-reinforced composite blade. Since its creation, the fan has gone through a few iterations. Tuf-Lite II was introduced in 1984 to increase the manufacturability of the fan’s parts, followed in 2004 by Tuf-Lite III. Tuf-Lite II and Tuf-Lite III fan designs use a proprietary vinyl ester resin in a resin transfer molding (RTM) manufacturing process. For the newest version, the Tuf-Lite IV, the company employed computational fluid dynamics (CFD) technology for a design that focused on noise reduction and efficient airflow. Tuf-Lite IV is also 20% larger. Hudson turned to Wickert Hydraulic Presses (Hebron, Ky., U.S.; Landau, Germany) for a new custom press, which enables changes to the layup sequence, type of fiberglass, material configuration, number of layers, resin injection points and positioning of vent lines. The result is a more efficient, more effective fan blade. 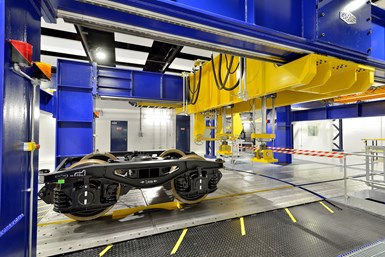 The Huddersfield Adhesion and Rolling Contact Laboratory Dynamics (HAROLD) test rig at the University of Huddersfield will take the prototype composite rail bogie (not shown here) through its paces. During this testing, the fiber-optic monitoring system will collect data to be evaluated against design and FEA models. Source | AMI Composites in Rail

One of the more unusual recent industrial applications of composites was a rail bogie, the four- or six-wheel trucks that support rail vehicles and provide traction and braking. The prototype bogie, developed in the U.K., is made primarily with recycled carbon fiber composites but is supplemented with virgin carbon fiber composites in places that require additional strength or stiffness. The bogie was developed by ELG Carbon Fibre Ltd. (Coseley, Dudley, U.K.), which supplies the recycled carbon fiber and performed much of the materials testing; Magma Structures (Portsmouth, U.K.), designer and fabricator of the rail bogie; the University of Birmingham (Birmingham, U.K.) Sensors and Composites Group, which worked with Magma to develop an embedded health monitoring system for the bogie; and the University of Huddersfield (Huddersfield, U.K.), on whose dynamic test rig the prototype is to undergo initial full-scale testing. Alstom U.K. (London) helped to assemble the consortium and has provided additional support through consulting and existing bogie design information. The consortium selected ELG’s Carbiso M, a nonwoven mat made with standard modulus fiber (strength of 4 to 5 GPa) in an epoxy matrix. They demonstrated that the fatigue performance of the recycled carbon fiber/epoxy is similar to that of conventional woven carbon fiber laminates — and better than that of structural steel. Finite element analysis (FEA) performed by Applied FEA Ltd. (Southampton, U.K.) verified fatigue service loads as well as exceptional static loads. The prototype is 36% lighter than the steel alternative; the composite frame itself yields a 64% weight savings, but the prototype suffers a weight penalty from paint and the tapping plates needed to attach the steel fittings. Considering the frame alone, the 590 kilograms of weight saved is estimated to produce an annual savings in operating costs of between £8,000 and £62,000, depending on the train’s service type and mileage. Additionally, each bogie frame could reduce CO2 emissions through its lifetime by as much as 68 metric tonnes.

Also emerging is the increased use of composites in tanks used to store cryogenic liquids. Along these lines, Cimarron Composites (Huntsville, AL, US) announced in 2018 that it had made a leap forward in all-composite cryogenic tank development, achieving 15,000 micro-strain performance with a carbon fiber-reinforced composite tank in a pressurized liquid nitrogen environment. Successful operation at such a high strain level allows the liner-less composite tank structure, made with a mixture of textiles and continuous wound fibers, to be much thinner than what was previously needed in these types of tanks, without the cost and mass of the liner. According to Cimarron, earlier composite tank programs were limited to 3,000 micro-strain due to materials and processing limitations, and this resulted in extra mass. Cimarron’s new tank technology uses a material system that performs well at extremely low temperatures without developing the microcracks that create leak paths for fluids like liquid oxygen, liquid hydrogen or liquid methane.