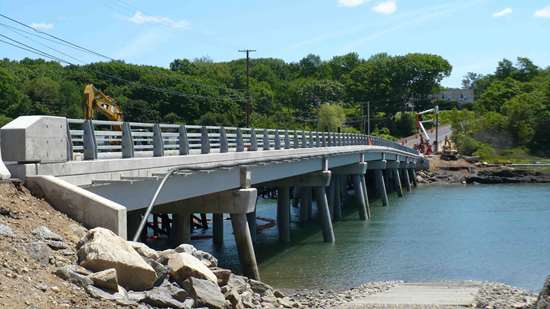 Reportedly the largest composite bridge in the world is the 32-ft /9.75m wide, 540-ft/165.6m long Knickerbocker Bridge , pictured here. Aging infrastructure is an ever-present issue in both the U.S. and the rest of the world. Transportation for America (Washington, D.C.) says there are 69,223 structurally deficient highway bridges in the U.S. alone that require rehabilitation or replacement. These numbers have stimulated development of a number of composite enabling technologies for civil engineers. Source: HC Bridge

Aging infrastructure offers a potentially huge market for composite materials. According to a report by the coalition Transportation for America (Washington, D.C.), titled The Fix We’re In For: The State of our Nation’s Busiest Bridges, there are 69,223 structurally deficient highway bridges in the U.S. alone — 11.5 percent of all U.S. highway bridges — that require rehabilitation or replacement. These numbers have stimulated development of a number of composite-enabling technologies.

Composite Advantage (CA, Dayton, Ohio), for example, has introduced a standard line of trademarked FiberSPAN bridge deck products for use on pedestrian truss bridges. Since the successful installation of its fiber reinforced polymer (FRP) decking material as part of an accelerated construction project at Wolf Trap National Park (Vienna, Va.) in 2012, the company says the product has quickly been adopted as a robust option for replacing concrete decks on traditional steel truss bridges. CA has established standard FRP bridge deck configurations based on American Association of State Highway and Transportation Officials (AASHTO, Washington, D.C.) pedestrian bridge requirements and typical stringer support spacing. Bridge deck depths include 3, 3.5, 4 and 5 inches (75, 90, 100 and 125 mm) and come with a nonslip wear surface. These product forms and depths are expected to provide designers with the specifications they need to incorporate FiberSPAN decking into their bridge concepts.

The early deterioration of concrete due to the corrosion and failure of steel rebar has been well documented. Conventional repairs could cost billions. Faced with the fact that, in many locales, the useful life of corrosion-prone steel-rebar reinforced concrete is limited to 25 years, rather than the 75 to 100 years once promised by its advocates, the lifecycle cost advantages — not to mention the safety benefits — of using composite rebar continue to overcome resistance among change-averse municipalities. In Ville St. Laurent, for example, a suburb of Montréal, Québec, Canada, a multistory concrete parking garage partially collapsed and killed a resident in November 2008. In the wake of this and other but nonfatal parking structure collapses, the Canadian government teamed with the Natural Sciences and Engineering Research Council of Canada (NSERC) and other engineering partners to investigate ways to combat corrosion and improve multistory parking garage design. With financial support from Québec City, the NSERC and others, a replacement concrete slab for a city-owned garage’s entire 3,100m2/33,370-ft2 first floor was designed by EMS Ingénierie (Québec, Canada) and reinforced with high-modulus Grade III Pultrall rebar, pultruded by Pultrall Inc. (Thetford Mines, Québec), with analysis was done, using fe-safe finite element and fatigue analysis software from Safe Technology Ltd. (Sheffield, U.K., and Livonia, Mich.).

Rail infrastructure is also aging, and composites are making slow inroads into train transport in the form of replacement rail ties, typically in areas of heavy rainfall and/or insect infestation, where wood ties must be replaced often enough that the cost of rot- and bug-proof composite ties is justified.

AXION (New Providence, N.J.), for example, announced several new contracts for its ECOTRAX rail ties, which are extruded with its patented recycled structural composite (RSC) material. The company received a third purchase order for ECOTRAX from Miami-Dade Transit (Miami, Fla.). For the Miami-Dade contracts alone, AXION says it has diverted from landfills and recycled about 1 million lb (453.6 metric tonnes) of plastic. AXION also received an order of more than $500,000 for its ECOTRAX composite ties from Dallas Area Rapid Transit (DART) for use in the Trinity Railway Express (TRE) that connects Dallas and Fort Worth.