According to a Nov. 2019 report by Stratview Research, the top applications for composites in automotive are, in order of volume, under-the-hood components, exteriors and interiors. Another growing market is suspension components and drive shafts. In addition to leaf springs, examples include:

For exteriors, ultra-lightweight SMC continues its push below 1.0 gram per cubic centimeter (g/cc) and carbon fiber is also gaining ground, with Polynt Composites (Scanzorosciate, Italy), Aliancys (Schaffhausen, Switzerland) and CSP VICTALL (Tanshan, China) all adding new SMC production lines over the past few years, all of which have the ability to make carbon fiber SMC. Polynt has also introduced Polynt-RECarbon recycled fiber SMC to its product offerings, as well as UDCarbon and TXTCarbon compounds featuring unidirectional and fabric reinforcements, respectively. The potential for these products can be seen in the front subframe development project completed by Magna International (Aurora, Ontario, Canada) and Ford Motor Co., which uses locally-reinforced and co-molded chopped carbon fiber SMC with patches of SMC made with carbon fiber 0-degree/90-degree non-crimp fabric (NCF). This SMC structural subframe must handle significant loads, supporting the engine and chassis components, including the steering gear and the lower control arms that hold the wheels. Though only a development part, it achieved an 82% parts reduction, replacing 54 stamped steel parts with two compression molded composite components and six overmolded stainless steel inserts, while cutting weight by 34%. 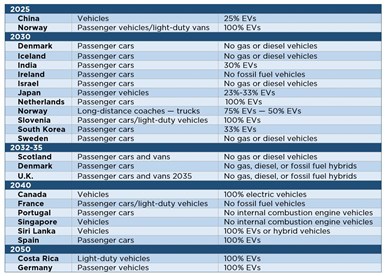 Vehicle electrification goals announced by select national governments, taken from Table 1, “Update on the global transition to electric vehicles through 2019” by the International Council on Clean Transportation (ICCT), July 2020.

Another driver for composites in automotive is the global push for zero emissions by 2050, which is leading to increased development and production of electric vehicles (EVs). In September 2020, California announced it will require all new passenger cars and trucks sold in-state to be emissions-free by 2035. At the same time, the EU proposed its 2030 target for new car CO2 emissions be tightened to 50% below 2021 levels, up from 37.5%. Julia Atwood, head of advanced materials at BloombergNEF, speaking at the IACMI Fall 2020 members meeting, said that by 2025, the average price of EVs is expected to drop below that of internal combustion engine (ICE) vehicles. She forecasts that global sales of EVs will exceed ICE vehicles by 2037 and will reach 50 million units/year by 2050.

The market for carbon fiber in automotive applications continues to grow. It was estimated at 7,000 metric tons (MT) of carbon fiber per year with a forecast to reach 11,000 MT in 2025 by Chris Red of Composites Forecasts and Consulting LLC (Mesa, Ariz., U.S.) at CW’s Carbon Fiber 2017 conference. However, by 2019, that market had reached almost 15,000 MT, as presented by Tony Roberts (AJR Consultants, Southfield, Mich., U.S.) at CW’s Carbon Fiber 2019 conference, with a 2025 forecast of almost 23,000 MT. 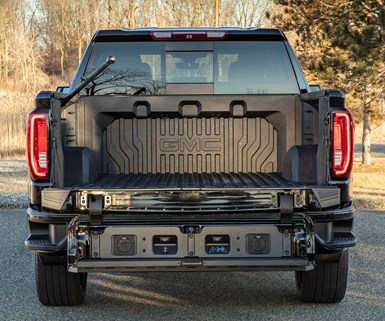 The industry’s first carbon fiber composite pickup box was unveiled in 2018 by General Motors (GM, Detroit, Mich., U.S.). The CarbonPro pickup box, an option for the 2019 GMC Sierra, was developed with Teijin Automotive (Tokyo, Japan), which acquired Continental Structural Plastics (CSP, Auburn Hills, Mich., U.S.) in 2017. CSP has years of experience manufacturing composite boxes for the Honda Ridgeline and Toyota Tacoma trucks, both made from chopped glass fiber sheet molding compound (SMC). For the CarbonPro, it opted for a direct long-fiber thermoplastic (D-LFT) for the sidewalls and headboard and for a short-fiber compound for the spare tire tray, both injection molded using glass fiber and polypropylene (PP). The 2019 GMC CarbonPro box also uses Teijin’s Sereebo thermoplastic composites manufacturing process, which combines a mat of 20-millimeter-long carbon fibers with nylon 6 that is compression molded for part cycle times of 60-80 seconds. 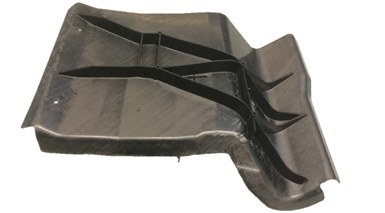 The use of thermoplastics in continuous fiber composites  is a growing trend, aided by processes such as overmolding, where blanks made of woven or unidirectional fibers in a thermoplastic matrix — known as organosheet — are compression molded into a 3D shape while reinforced plastic is injection molded on top and around to form complex-geometry ribs, bosses, inserts and attachment points. Parts in development or production include seat backs, seat rests, airbag housings, A and B pillars, door cross beams, bumper beams and large floor components.

Another trend is to use unidirectional (UD) tapes to reduce waste compared to woven or NCF reinforcements. Because the tapes can be cut and placed precisely, very little scrap is produced and fibers can be aligned more precisely to match loads. Examples include the CFRP rear wall for the Audi A8 luxury sedan made in a fully automated, Industry 4.0 production line by Voith Composites (Garching, Germany). It provides 33% of the drive cell’s torsional stiffness while cutting weight by 50% compared to the previous assembly of multiple welded aluminum parts.

Pultrusion is another growing process. In 2018, L&L Products launched its Continuous Composite System (CCS) pultrusions using polyurethane resin and glass, carbon or hybrid fiber reinforcement for automotive applications such as side sills and crash structures. Designed to replace traditional metal structures that require bulkheads for necessary stiffness, CCS pultrusions offer 75% less mass than steel and 30% less than aluminum at an economic price. 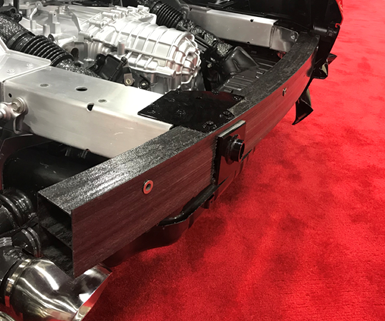 Metal-composite hybrids are a trend offering the ability to provide extra reinforcement only where needed while keeping production costs under control. Examples include: 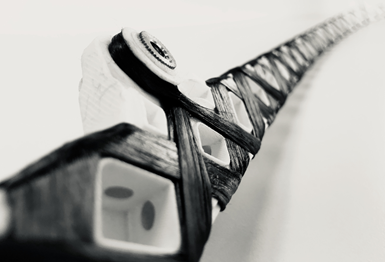 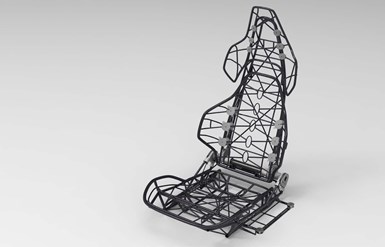 Generative 3D winding — with a robot but without a core — is a technology being developed by automaker Daimler (Stuttgart, Germany). Dubbed FibreTEC3D, the process wet winds carbon fiber/epoxy around aluminum pins inserted into a tooling plate. The part’s digital design directs placement of the pins and generation of the robotic winder code. Daimler’s idea was to make assembly robot grippers lighter — which it does, by 50% — but then the car development department wanted to use the technique to prototype other parts. Topology-optimized designs enables putting the right material in the right places, and putting the carbon fiber in tension, which minimizes the amount of material required and maximizes efficiency. xFK in 3D is a similar technology demonstrated in the Ultraleichtbausitz (ULBS) 10-kilogram ultra-lightweight seat by the German partners csi entwicklungstechnik GmbH (Neckarsulm, Germany), Alba Tooling & Engineering (Forstau, Austria) and Automotive Management Consulting (Penzberg, Germany). 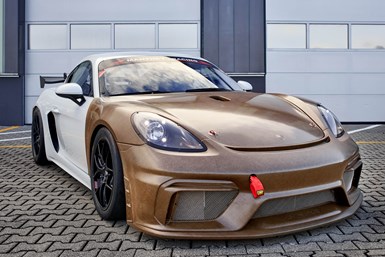 Natural fibers, most typically hemp, flax and kenaf, have been used in automotive interior composites for decades in applications such as panels for doors, head liners, trunk liners, pillar covers, rear parcels and seat backs. With a push to improve recyclability and sustainability, especially in Europe, natural fibers are now being demonstrated in body panels and crash structures for motorsports, which has long been the proving ground before wider adoption. Porsche Motorsport partnered with Bcomp (Fribourg, Switzerland) and Four Motors racing team to deliver its Cayman 718 GT4 CS MR featuring a full natural fiber composite bodywork using Bcomp’s powerRibs technology. The car was premiered at the 24 Hours Nürburgring race in September 2020. Porsche Motorsport had already launched the Porsche Cayman 718 GT4 CS in 2019 with natural fiber doors and rear wing and was also the first to replace carbon fiber with natural fiber in serial production composites for motorsports.

In October 2020, Bcomp’s ampliTex flax fibers were demonstrated by YCOM (Parma, Italy) in the successful crash-test of a natural fiber Front Impact Absorbing Structure (FIAS) — said to be the first of its kind. Designed as a proof of concept, the structure enables a CO2 reduction of approximately 50% and, says Bcomp, proves that high-performance natural fibers can be used for significantly wider applications than previously thought, including structural- and safety-critical parts. 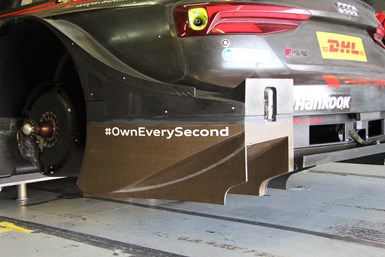 The German racing series Deutsche Tourenwagen Masters (DTM) has also worked with Bcomp to open technical regulations enabling a material shift from carbon fiber to Bcomp’s ampliTex and powerRibs natural fiber materials on mandatory composite parts for the 2020 season. The first such parts were successfully validated by BMW Motorsport and Audi Sport during DTM testing in Jerez, Spain, and Vallelunga, Sicily. “With a high exposure to contacts, the DTM shoebox is a typical motorsport bodywork wear part that needs to be replaced or repaired after almost every race,” says Layla Wagener, sport and engineering specialist at DTM. “With Bcomp natural fiber technologies, we can achieve the same weight as with carbon fiber, while additionally taking advantage of the anti-splintering and environmental benefits. It is an ideal start to introduce Bcomp’s sustainable lightweighting solutions.”

And, the transfer of technology to new mobility solutions has already begun. The Swedish company Volta Trucks revealed its Volta Zero, said to be the world’s first purpose-built, 16-tonne electric vehicle designed for inner-city freight deliveries, which is also adopting Bcomp’s ampliTex and powerRibs natural fiber technologies for stiff and lightweight body panels. Bcomp says it will also enable significant weight savings and up to 75% lower CO2 emissions compared to matching carbon fiber parts. In addition to Bcomp’s flax fibers, the body panels will use a novel bio-based and biodegradable resin derived from rapeseed oil to further reduce the footprint of the whole vehicle. To learn more, read: