Tepex continuous-fiber-reinforced thermoplastic composite materials from LANXESS (Pittsburgh, Pa., U.S.) have shown potential for a variety of automotive applications — those CW has covered recently include support for a hybrid metal-composite automotive A-pillar, an automotive rear seat shell and a center console armrest demonstrator. A recent case study from the company adds lightweight construction of structural safety components to the list.

LANXESS recently developed a child seat headrest as a technology demonstrator to illustrate the materials’ opportunities in this market. The component is produced in a particle-foam composite injection molding (PCIM) process.

“The insert made of Tepex can reduce the weight of the headrest by up to 30% in comparison with the commercially produced component variant — and with comparably good crash performance, too. It also simplifies the production process,” says Dr. Klaus Vonberg, of the Tepex Automotive Group at LANXESS. Tepex is developed and produced by LANXESS subsidiary Bond-Laminates GmbH (Brilon, Germany). 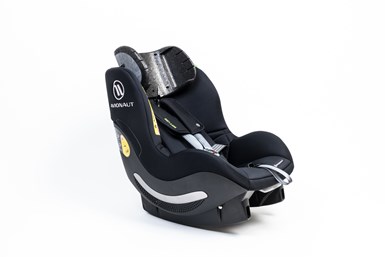 The demonstrator is the result of a transnational research project funded by the German Federal Ministry for Economic Affairs and Energy as part of the Central Innovation Programme for Small and Medium-Sized Enterprises (SMEs) (German acronym: ZIM). Participating in this program are the Department of Lightweight Structures and Polymer Technology (SLK) at Chemnitz University of Technology, Polycomb GmbH (Auengrund, Germany) and child seat manufacturer Avionaut (Szarlejka, Poland).

For the headrest, the project partners developed an alternative production process based on PCIM. To reinforce the headrest in individual places and reduce weight, they used a customized insert made of Tepex dynalite 104-FG290(4)/47%. This is a polypropylene-based composite material that is strengthened with two layers of continuous-glass-fiber rovings. The insert is formed in a single process operation using an injection molding tool with turning plate and back-injected with a short-glass-fiber-reinforced polypropylene compound to integrate the support structure for the headrest and backrest. The prefabricated insert is then back-foamed in a second tool using particle foam based on expanded polypropylene (EPP).

The reference headrest, by contrast, is currently produced in series using multiple individual components, according to LANXESS. The support structure consists of long-glass-fiber-reinforced polypropylene. It is assembled with a separately foamed EPP component using four polypropylene carrier pins.

“Not only is the new, highly integrated production process more energy-efficient than the previous procedure, it also results directly in the finished component. This reduces the total number of parts from six to one, which also lowers production costs in terms of logistics and the machine expenditure required,” says Norbert Schramm, scientific assistant at the Chemnitz University of Technology and head of the ZIM project there.

The weight saving with the current version of the headrest component featuring glass fiber is roughly 26%, although project participants note potential for more. According to Schramm, “If a reinforcement based on carbon fibers is used in the composite semi-finished product and in the injection molding material, the result is an assembly that is almost 30% lighter.”

For the project, the SLK chose the materials, analyzed the composite adhesion, designed the structure and carried out topology optimization. Polycomb led development and design implementation of the demonstrator, production of prototypes and optimization of the system concept. Avionaut analyzed the force transmission areas, developed the design and examined the crash behavior of the headrest and the entire seat in realistic collision tests, for example. LANXESS helped the project partners to choose materials and also assisted with tasks such as the development of the hybrid molding process.

LANXESS sees potential for Tepex and the new process in the production of infant carriers, backrests and armrests as well as seat shells for new, highly complex seating concepts in autonomous cars or for comfort seats for shuttle, VIP and family buses and electric vehicles.