Nike Bauer Hockey, a producer of ice hockey equipment since 1927, recently used carbon-fiber reinforcement in its redesigned goaltending stick for professional goaltenders in the National Hockey League (NHL). A goalie’s stick is larger that a normal hockey stick, with a larger blade and paddle, and has to be stro
#spreadtow #weaving 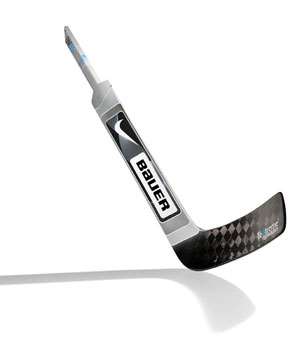 A goalie’s stick is larger that a normal hockey stick, with a larger blade and paddle, and has to be strong and impact resistant to deflect a puck traveling nearly 100 mph/161 kmh. “We were looking to reduce the weight of the stick as much as possible, without sacrificing performance,” says Adam Gans, Nike Bauer’s hockey stick director of product development.

The company turned to a trademarked product from Oxeon AB (Borås, Sweden, 2037), called TeXtreme Spread Tow carbon fiber fabric, for its new Supreme One95 goaltending stick. Oxeon uses 12K carbon fiber tows supplied by Toray Carbon Fibers (Tokyo, Japan, 3959), as well as other suppliers, and spreads the tows, using its proprietary fiber spreading technology, which was developed by Dr. Nandan Khokar of the University of Chalmers in Gothenburg, Sweden. The spread tows are woven to form a very low-areal-weight fabric, about 160 g/m2, with a distinctive checkerboard appearance. Oxeon also offers a spread-tow product in the form of unidirectional tapes, notes Oxeon’s VP of business development, Andreas Josefsson. The tape are sold under the TeXero trademark.

“We were drawn to the TeXtreme material because of its very low weight and good drapability,” says Gans. “The material allowed us to take substantial weight out of the blade and paddle areas, which, in turn, gave us a better balanced stick. At the same time, the look of the exposed carbon has been extremely well received.”

Nike Bauer subcontracts prepregging of the dry fabric with an epoxy resin. The prepregged material is layed up in a two-part steel mold together with a low-density core material and cured. Gans says that the widely spread tows have good straightness and essentially perform like cross-ply unidirectional tapes, providing better performance properties than a traditional fabric. In addition, with fewer crossover points to collect resin, the spread tow prepreg results in a better fiber-to-resin ratio, which also helps reduce the weight of the part, he notes.

The Supreme One95 stick is already in use by several NHL goaltenders, including Peter Budaj of the Colorado Avalanche. The stick was launched on the retail market in February of this year and sells for about $270.