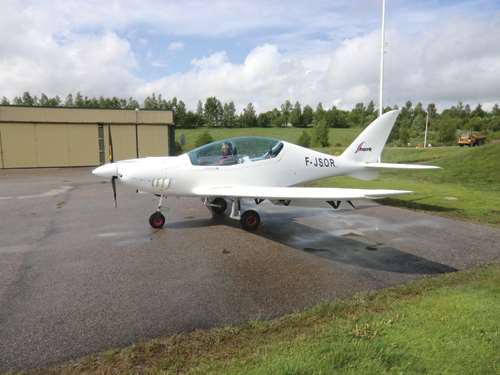 TeXtreme Spread Tow woven carbon fabrics are made in a novel process in which carbon tows are spread to form thin, flat tapes. Then, the tapes are woven together (the weave pattern is visible in the photo) to make very thin fabrics with virtually no fiber crimp. Source: Oxeon AB

After a first prototype failed to hit the design weight goals, the company approached Oxeon (Borås, Sweden) in late 2008 to test trademarked TeXtreme Spread Tow woven carbon fabrics. The fabrics are made in a novel process in which carbon tows are spread to form thin, flat tapes. Then, the tapes are woven together to make very thin fabrics with virtually no fiber crimp (the weave is visible in the photo at right). The resulting reinforcement has mechanical properties similar to a traditional cross-ply unidirectional material, but achieves those properties with less weight.

Shark Aero tested the mechanical properties of several TeXtreme variants and found that TeXtreme offers mechanical and process advantages when they are compared to conventional carbon fiber-based reinforcement materials. In particular, composite parts could be redesigned to reduce weight without sacrificing essential strength. Further, the surface smoothness afforded by TeXtreme tape eliminated the need for an outer protective layer of glass fabric, cutting a labor-intensive step in the manufacturing process. As a result, Shark replaced the plane’s 200-g/m2 and 90-g/m2 baseline fabrics with 160-g/m2 and 80-g/m2 TeXtreme fabrics, respectively.
“By switching to TeXtreme, we saved 50 kg [110 lb] in total on the aircraft,” reports Shark Aero CEO Vladimir Pekar. He also notes that “on average, the weight of smaller parts, such as the stabilizer, elevator, rudder, spinner and landing gear doors, have been reduced by 60 percent. Weight savings of this magnitude allow us to build a faster airplane.”

The plane’s fuselage now weighs just 41 kg/90 lb, which is 25 kg/55 lb less than the prototype made using conventional carbon fiber fabrics.
Thanks to the lighter spread-tow fabrics, the program has been a success. “By switching to TeXtreme and performing finite element modeling,” Pekar says,  “the unexpected 25-kg weight savings allowed us to meet the maximum empty weight of 300 kg/661 lb for a single-seat ULA and at the same time improve many crucial flight features.”

Shark UL airplanes are presently competing for world speed records and are aiming to reach the ULA speed limit in the near future.