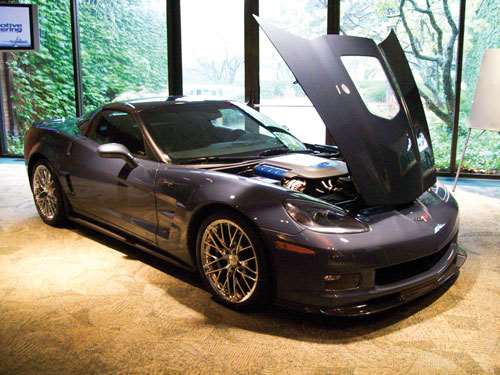 On display at SPE’s ACCE was the “production car that started it all.” The new Chevrolet Corvette ZR1, with a carbon-fiber composite hood (complete with inner exposed-weave panel), fenders and several trim parts, continues in its role as a prime General Motors testbed for composites technologies.

On display at SPE’s ACCE was the “production car that started it all.” The new Chevrolet Corvette ZR1, with a carbon-fiber composite hood (complete with inner exposed-weave panel), fenders and several trim parts, continues in its role as a prime General Motors testbed for composites technologies.

The Conference was distinguished this year by the unusually high quality of the technical papers and the exciting stories of innovative design and engineering development that they told. Here, ACCE attendees take in a presentation by Hans-Juergen Karkosch (ContiTech Vibration Control, Hanover, Germany) and Holger Klink (BASF SE, Ludwigshaven, Germany) on research into and recent commercialization of fiber-reinforced polyamide engine mounts.

The Conference was distinguished this year by the unusually high quality of the technical papers and the exciting stories of innovative design and engineering development that they told. Here, ACCE attendees take in a presentation by Hans-Juergen Karkosch (ContiTech Vibration Control, Hanover, Germany) and Holger Klink (BASF SE, Ludwigshaven, Germany) on research into and recent commercialization of fiber-reinforced polyamide engine mounts.

When the Society of Plastics Engineers (SPE) convened its 10th annual Automotive Composites Conference & Exhibition (ACCE) at the MSU Management Education Center in suburban Detroit, Mich., on Sept. 15-16, there was little sign — or discussion — of the recent recession and restructuring that distracted auto OEMs from their core businesses in the past 18 months. The fact of its impact was frankly acknowledged, but beyond that, ACCE speakers and participants were much too busy moving on to let past depressing news distract them.

Under the theme, “Composites: Shaping New Vehicles,” six keynote speakers outlined the future of auto composites from all angles. Mike Jackson, director of North American Vehicle Forecasts for automotive market-research firm IHS Automotive (Northville, Mich.), led off with a market outlook for the North American auto industry in the context of the increasingly interconnected global auto economy. Jackson pointed to a “shifting business model”: OEMs, pressed by U.S. Corporate Average Fuel Economy (CAFE) regulations and similar measures in the European Union, are focusing on economies of scale, developing platforms that can be sold into multiple markets. “Developing one car that can be sold globally is the priority,” Jackson maintained. “Tailoring products to markets using a single basic platform is the key.” Although he acknowledged that “the recent recession and its lasting impacts have made it more difficult to attract capital,” he contended that the real challenge before automakers is to find and leverage technologies that will enable them to make the one-platform/multiple-market transition.

Keynoter Anthony Dodsworth of Bentley Motors Ltd. (Crewe, Cheshire, U.K.) revealed several innovations developed for its upcoming T35-4 sports car. Most notable was its Sprayed Metal Composites concept, the answer to the question, How do you get a composite part that you can paint like metal? Dodsworth outlined the company’s development of a sprayable metal coating and a spray apparatus that can deposit molten metal (nominal 200 µm thickness) on a prepped, heat-resistant ceramic mold surface in the same way a conventional gel coat is applied. An adhesive follows, which compensates for the modest difference in the metal and composite coefficients of thermal expansion, and then resin and chopped heavy tow carbon fiber are sprayed on to build up the part thickness. The result, he contends, is “a panel that paints like metal but performs like a composite.”

Speaker Joseph Ouelette revealed Acrolab Ltd.’s (Windsor, Ontario, Canada) inductive heating method for filament winding mandrels. Acrolab uses a highly thermally conductive heat pipe that, when exposed on one end to an inductive heating coil (the coil makes no contact with the pipe, thus permitting free rotation), quickly and evenly distributes heat over the pipe’s entire outer surface. The result, says Ouelette, is even heat radiating outward from the inside diameter of the wound part. The many benefits include the elimination of the volatile entrapment typical of oven cure and the inherent inefficiency of convection heating.

McLaren Automotive Ltd.’s (Guildford, U.K.) principal engineer, Claudio Santoni, discussed the technological history of the complex, one-piece carbon fiber composite passenger MonoCell in “The CFRP MP4-12C Supercar” (see our article on the MonoCell by clicking on "F1-inspired ...." under “Editor's Picks,” at right). And two veterans of carbon composite R&D in the auto world called for increased focus on making production-capable carbon fiber parts. Gary Lownsdale (Plasan Carbon Composites, Bennington, Vt., the former Vermont Composites Automotive Div.) did so in a discussion of Plasan’s efforts to achieve a 10-minute cycle time for carbon composites — the practical equivalent of 40,000 units per year, enough to put carbon into the midvolume car category. Don Lasell, now retired but long associated with General Motors’ and Vermont Composites’ efforts on the carbon hood and front fenders that debuted mid-decade on the Corvette ZR1, issued an impassioned plea for reimagining auto manufacture and considering the potential of the auto OEMs’ legacy steel-stamping technologies to similarly form carbon fiber/epoxy laminates that have been selectively cured to permit bending, folding and contouring at still B-staged locations. Lasell and Lownsdale expressed hope that the U.S. Department of Defense, the Oak Ridge National Laboratory (ORNL, Oak Ridge, Tenn.) and industry partners will be able to produce a low-cost, lignin-precursor-based carbon fiber.

Always a high point in the ACCE schedule, the annual panel discussion at the end of the first day was no exception. Moderated by past ACCE chair Dale Brosius (executive director of Quickstep Composites LLC, Dayton, Ohio), the panel considered a question on many minds at the conference: How to take composites from niche to mainstream in the auto industry? Panelists included the previously mentioned Dodsworth, Santoni and Lownsdale as well as two representatives of Detroit’s Big Three: Mark Voss (General Motors Co., Detroit, Mich.) and Patrick Blanchard (Ford Motor Co., Dearborn, Mich.). Panelists first argued the prior question, What is “niche,” and what is “mainstream”? There was no consensus. Niche applications were variously described as fewer than 20,000 units per year to as many as 40,000 units per year. There was consensus about one thing: Carbon fiber remains a niche material. For larger volumes, said Voss, “the business case isn’t there.” Blanchard saw significant opportunities for high-volume application of compression-molded SMC and other “conventional” composites. Voss noted that the important issue is finding the best matchup of material, process and application. It’s not about whether or not to use composites, but where and how. Look for a more extensive recap of the 2010 SPE ACCE event in the December issue of CT.