Orbex’s 18-meter long carbon fiber winding machine is said to be one of the largest such machines in Europe.  Source | Orbex

Several new production systems have been installed at the facility, including an 18-meter long carbon fiber winding machine that automates the rapid weaving of materials to build the main rocket structures. Orbex says it has worked for several years to perfect the carbon fiber blend used in the patented construction of its Prime rocket, which is said to be 30% lighter than similar sized rockets, allowing acceleration from 0 to 1,330 km/h in just 60 seconds. 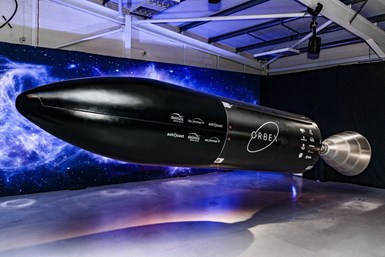 “We’re creating rockets in a way that hasn’t been done before,” says Chris Larmour, Orbex CEO. “The whole point of NewSpace — private enterprise getting involved in spaceflight — is to provide faster, better and cheaper access to space. Burning through hundreds of millions of dollars on robotic assembly lines or hundreds of staff to produce heavy, metal rockets is an antiquated approach. Building a modern space business means updating the manufacturing ethos to be faster, more agile and more flexible.”

According to Orbex, while some launch solutions for small satellites require up to 200,000 kilos of fossil fuels, Prime needs just 4,000 kilos of fuel per launch, making it around fifty times more fuel efficient. Prime will use bio-propane, a clean-burning and renewable fuel that reduces carbon emissions by 90% compared to standard kerosene-based rocket fuels. It also avoids using hazardous substances such as hydrazine or highly concentrated hydrogen peroxide. Prime rockets are also designed to leave no orbital debris and to be re-usable, using an innovative low mass concept to recover the main stage.

The company also unveiled its new Mission Control Centre that will be used to monitor orbital rocket launches from Scotland and other sites, as well as engine tests from its two propulsion test sites. The company is currently working to get approval for Sutherland spaceport in northern Scotland, a facility that would be shared with Rocket Lab (Huntington Beach, Calif., U.S.) for launch of its composite Electron rocket, though the companies would use different launch pads.