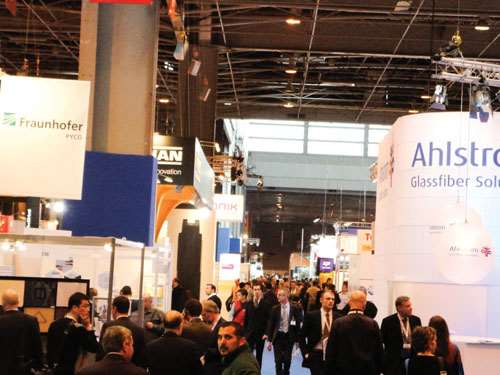 The European branch of the Society for the Advancement of Material and Process Engineering (SAMPE) will host its 32nd SAMPE Europe Conference and Forum (SEICO 11) at Hotel Mercure, Paris Porte de Versailles Expo, Vanves, France. This event begins March 28, a day earlier than the JEC Composites Show. Notably, the historically three-day event will be packed into two days, ending on the afternoon of March 29. The new schedule will accommodate delegate travel budget restrictions and will permit SEICO attendees who can afford a longer stay in Paris up to two full days on the JEC Composites Show exhibition floor without missing any SEICO events.

The conference theme, “New Material Characteristics to Cover New Application Needs,” underscores SAMPE Europe’s perceived need to explore ways to tailor the material characteristics of, and select a manufacturing method for, an advanced component toward the goal of optimizing performance in the defined application in a way that accounts for real-world cost restraints.

The conference will feature two keynote speakers this year. The first, on Monday, March 28, will be focused on the aerospace industry. Dr. Takashi Ishikawa, director of the Aviation Program Group at the Japan Aerospace Exploration Agency (JAXA, Tokyo, Japan), will present an overview of JAXA’s composites research and development activities. The following morning, Dr. Jan Anders Manson, professor and vice president at the École Polytechnique Fédérale de Lausanne (Lausanne, Switzerland), will discuss the challenges ahead for automakers who contemplate large-scale use of composites in passenger vehicles. The Manson keynote will be followed immediately by a plenary session that will feature five key technical papers that address automotive composites.
SAMPE Europe officials expect more than 90 papers to be presented in parallel sessions (see the “SEICO 11 at a Glance” sidebar at the end of this article).

SEICO 11 attendees can use their registration badges to gain free access to the JEC Composites Show 2011. A free bus shuttle service will operate between the SEICO 11 Conference at Hotel Mercure and the main entrance of the JEC Composites Show at the Paris Expo Complex, Porte de Versailles, on Tuesday, March 29, from 8:00 a.m. to 6:15 p.m.

All attendees of SEICO 11 will receive one copy of the SEICO 11 Proceedings, in English, on a CD-ROM. Additional copies may be purchased at the conference registration desk for €70.00 (~$95 USD).

A few minutes away, at the Paris Expo, the 2011 edition of the JEC Composites Show, Europe’s largest and longest-lived composites trade exhibition, will be held March 29-31, at the Paris Expo in Porte de Versailles, Paris, France. Last year the show reportedly attracted 1,065 exhibitors, the largest number for a 2010 composites event. Of that number, 74 percent were headquartered outside France. According to JEC, the 2010 show attracted 27,500 visitors, 69 percent of whom were from outside France.

New this year is JEC’s Job Center. At the center, exhibitors will be able to display current job postings, while visitors may use the center to distribute résumés.

For the fourth year, the technical conference on Composites and Design will be presented in league with JEC’s U.S.-based academic partner, Stanford University. Also on offer again this year, exhibitor Technical Presentations will be held at a special venue on the JEC Composites Show floor. There is no cost for these events. Attendees will be able to gather in-depth technical data about new products and services during presentations by more than 50 exhibitors, with plenty of time to ask questions.