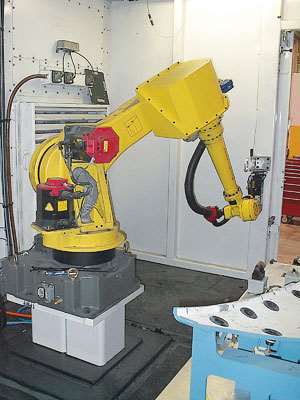 Today, when a demolded fender is loaded into one of RoboTrim’s two part-shaped vacuum fixtures (see near photo), its two-sided servo-controlled table rotates the part 180° into the enclosure in less than three seconds. The floor-mounted AccuTrim R-99 robot uses a 3-hp motor to provide the power to machine the notoriously hard-to-cut carbon, drilling the holes and slots with a titanium-coated carbide drill bit, then changing the tool to a similar router bit for the trimming step. After the part is trimmed, the table rotates the finished part out for unloading as an untrimmed part is rotated inside. The fully enclosed system keeps the environment clean. Most important, the new system, operated by an all-female staff, can process a fender every 13 minutes — a more than 75 percent reduction in postmold processing time. Says Plasan USA’s general manager Dalton Blackwell, “We found the right tool combination to achieve superior edge quality without excessive tool wear.”