Much work has been done to make OOA processing practical for aerospace applications, but much work still remains if it is to become the compelling option.
#autoclave #adhesives #outofautoclave 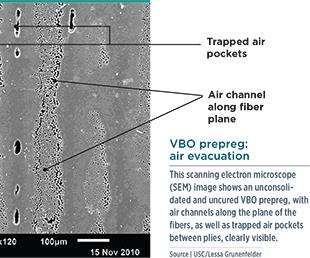 Much is at stake with regard to out-of-autoclave processing. Although OOA methods use less energy, energy consumption is actually a small portion of total composite part cost, and if a company changes how a part is manufactured, re-qualification costs must be considered in the cost equation. But, if volumes are high enough, OOA is worth pursuing because it can shorten cycle times and significantly cut capital and tooling investments, which ultimately will make composite parts more cost effective.

But much work remains to be done to improve processing and address issues that include surface porosity and pitting, debulk time and void entrapment. Dr. Lessa Grunenfelder, a member of the teaching faculty at the University of Southern California (USC) Viterbi School of Engineering (Los Angeles, CA, US), together with Professor Steve Nutt, the director of the M.C. Gill Composites Center in USC’s Department of Chemical Engineering and Materials Science, has presented research on better ways to evacuate entrapped air and moisture from vacuum bag only (VBO) prepregs.

“Breathable edge dams,” says Grunenfelder of a popular current solution, “are great for simple parts, but what about complex parts with ply drops? We must have some degree of in-plane and through-thickness permeability.” USC has actually developed a woven fabric prepreg product, called USCpreg, a vacuum-bag only (VBO) semi-preg system made in a roll-coating process. Resin impregnation of the USCpreg is uneven and irregular, which leaves dry areas that create pathways for air escape without the need for complex edge-breathing bagging setups, and eliminates long vacuum hold times. “This system will make larger, more complex parts possible with OOA prepregs,” she says. However, VBO prepreg’s greater comparable bulk, wrinkling issues and how to translate USC’s material concept to unidirectional prepreg plies are still challenges: Work is continuing on visualization studies that track air removal in prepregs, co-cure of OOA sandwich structure facesheets and adhesives, and VBO processing of complex parts with corner angles.

Mikhail Grigoriev, a senior process engineer at Aerospace Materials Processing (Redondo Beach, CA, US), has investigated ways to reduce surface porosity and pitting on the tool side of OOA parts, with funding from the Air Force Research Laboratory (AFRL, Dayton, Ohio). “Our motivations were to achieve equal properties with autoclaved composites, at reduced part cost, and with no limit in part size,” says Grigoriev.

To avoid having to use unwieldy release films that are tough to apply on complex shapes, Grigoriev’s team has investigated etching micro-structured patterns onto tools. The research has shown that the height of the etched features was the key element. Etched patterns between 12 and 14 microns high reportedly provide adequate pathways for gas escape, reducing surface pitting and overall porosity. Work is continuing on larger tools and proprietary etchings, he says.

Although autoclave-cured prepregs are well-modeled and characterized, OOA prepregs can have different tool/part interaction and thermal profiles. AFRL’s Gregory Ehlert has presented information on the use of gold nanorods, 40 to 60 nm in length, mixed with epoxy prepreg resin, that change shape gradually, and irreversibly, with heat. Using Raven simulation software from Convergent Manufacturing Technologies Inc. (Vancouver, BC, Canada), Ehlert’s group was able to model degree of cure out of the autoclave as a function of temperature and time, confirmed as nanorods change from rods to small spheres: “It’s a passive technique that has utility for monitoring cure for OOA processing,” says Ehlert.

The University of Delaware’s Center for Composite Materials’ (CCM, Newark, DE, US) post-doctoral researcher Thomas Cender has studied the physics of air bubble formation and migration during vacuum application, and the conditions under which the air bubbles within the resin can flow faster than the average resin velocity, and be evacuated with the applied vacuum. The CCM group is developing models to characterize the way that bubbles (which form voids in the cured part) can be eliminated. “We want to establish how the pressure gradient, fabric permeability and fluid properties can be optimized to increase bubble mobility so that they can be removed during the process,” says Cender.

NASA has investigated the issue of out-time of OOA prepregs, compared to autoclave-curable prepregs, from the standpoint of their impact on the ability to fabricate very large structures within the time window afforded by the prepreg itself. Past research has shown that while OOA composite test parts have comparable mechanical and thermal performance to autoclaved parts, when both are made with “fresh” prepreg, OOA prepregs’ thermal and mechanical performance and tack was significantly reduced when out-life exceeded 21 days. A current NASA project, the Long Out-time, Out-of-Autoclave Cure Composites Project, is committed to developing a prepreg matrix system for OOA parts with an out-time of one year, during which produced parts uniformly exhibit good part properties and damage tolerance.