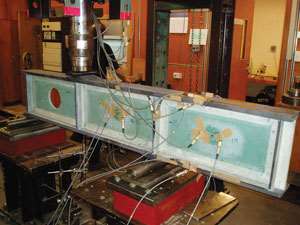 High Modulus set out to determine what impact these holes have on the strength of a hull/deck stiffener, built as a highly orthotropic laminate subjected to shear stress. Orthotropic refers to a laminate with perpendicular planes of elastic symmetry — in other words, having a balanced ply architecture. While there is much data on through-penetrations, Lake says conventional stress concentration models don’t always address this type of problem occurring in shear webs in marine structures.

Not surprisingly, both the actual mechanical tests and the FEA models showed that through-holes caused stress concentrations that reduce the load-carrying capacity of the shear web. For example, a 336-mm test web with a single 50-mm diameter hole failed at a load only half of what was expected when compared to a solid, hole-free web 250 mm/10 inches deep.

“The lesson from this is that small holes have a big impact on the structural integrity of girders,” Lake notes, adding, “FEA can accurately predict this impact, providing engineers with a means of anticipating — rather than compensating for — problems during a vessel’s construction.”

A number of boats built by High Modulus customers already have benefited from this research, including the Humphreys 37m/121-ft motoryacht built by McMullen and Wing in New Zealand, which is due for launch in September, and the Tripp 125 lift keel sloop currently under construction at Vitters Shipyard in The Netherlands.