With 7,000 employees worldwide and 2018 revenues of €2.2 billion, STELIA Aerospace (Toulouse, France) plainly states its primary products and industry position: No. 1 in Europe/No. 3 in the world for aerostructures, No. 1 worldwide for pilot and crew seats and No. 3 worldwide for first- and business-class passenger seats.

STELIA Aerospace’s use of composites extends to Airbus A350 forward fuselage sections, wings for ATR turboprop aircraft, various helicopter structures and in some seat products, including its newest OPAL seat. Composites production facilities include French sites Méaulte (large fuselage sections) and Salaunes (smaller composite parts), detailed parts and assembly in Morocco and Tunisia and a wide range of composite parts for aircraft, defense and space at the previous Composites Atlantic site in Lunenburg, Nova Scotia, Canada.

STELIA Aerospace was formed via the 2015 merger of two previous Airbus subsidiaries — Aerolia and Sogerma. Its Méaulte site — a 1.5-hour drive north of Paris — covers 49 hectares with 150,000 square meters of production space, 1,500 employees and 500 subcontractors, and is a key part of the Airbus supply chain. Its small-town location belies a production powerhouse, “delivering 860 nose fuselage sections for the A320, A330, A350, A380 and A400M in 2018,” says STELIA Méaulte communications manager Francois Fournier. He is my guide through the site’s “Factory of the Future” A350 nose fuselage production and the STELIALAB R&T facility, accompanied by Olivier Canal, STELIA Aerospace Méaulte head of R&T manufacturing, assembly & automation, composites & digital factory, and Simon Maire-Vigeur, head of R&T composites manufacturing, STELIALAB.

“Factory of the Future”

During an introductory presentation in the site’s headquarters building, Fournier explains that STELIA Aerospace has invested in future technologies, such as digital manufacturing and automation including augmented reality/virtual reality used to increase efficiency in production and robots/cobots for more efficient assembly.

“The future is composites and metallic structures,” notes Canal. “We are trying to define future solutions not to replace our workers, but to make them more efficient.”

This drive for efficiency is perhaps best exemplified by the “Factory of the Future” initiative started five years ago to meet ramps in A320 and A350 production. “We embraced a new industrial strategy for this site,” recalls Canal, who was a project manager for the initiative. “We wanted the ability to meet variable production rates and developed flexible tooling which we could repurpose from one program to another.”

Another result of this rethinking was dedicating buildings to specific programs. “Each would have one line and one team,” says Canal, “and be designed with a lean manufacturing approach which focuses on eliminating waste in labor, movement, materials and process.” STELIA Aerospace also redesigned the A320 line, and gained a 10-20 percent increase in productivity, “which is actually a significant improvement,” says Canal. “We achieved this in 2.5 years, changing more than 50 percent of the footprint of this site’s manufacturing while maintaining production and 100 percent on-time delivery with no loss in quality.” This success is credited to high-level management backing, “but we also worked hard for the workers to have ownership,” he notes.

Canal explains that the design of the 30,000-square-meter A350 production building was dictated by flow, exemplified in its U-shape, with raw materials entering one end and finished fuselage sections exiting the other. “Everything for our A350 structures production is in this building, from beginning layup to final assembly. This is important, for example, allowing any quality issues to be identified and addressed quickly and easily,” he says.

For the A350, STELIA Aerospace produces the nose fuselage section 11, which is all metal to better resist bird strike damage, as well as the complex metal/composite hybrid assembly for section 12 and the section 11/12 lower unit, which includes the nose landing gear bay. Fournier shows STELIA Aerospace’s “Factory of the Future” video, pointing out the pulsed line, like that used for automotive assembly. “We set up a demo line to allow the workers to train and demystify this moving line, which works at a specific takt time to meet full-rate production,” says Canal.

Another aspect was digital technology. “Digital solutions enabled us to put all of the technical schematics and steps on a tablet and ensure access to the latest 3D mockup for each section,” says Canal. Workers are thus kept informed about crucial details and changes while managers are easily notified about potential issues. “We also developed augmented reality to aid assembly, for example, projection onto the fuselage shells showing which parts and where the attachments are to be made,” notes Canal. He adds that inspection cobots are used to complete 3D scans of finished sections which are then compared to the digital mockup, identifying any foreign objects or missing parts, quality issues, etc.

Our tour began in the A350 production building’s clean room, where Coriolis (Quéven, France) automated fiber placement (AFP) machines lay up large carbon fiber-reinforced polymer (CFRP) fuselage shells for the section 11/12 lower unit, and the crown and two side shells for section 12. These shells are then mated with prefabricated stringers, vacuum-bagged and cured in an autoclave. After cure, they are trimmed and loaded onto handling tools that enable easy transport throughout all of the steps for assembly, which includes robotic drilling and fastener installation. Every panel is inspected using automated nondestructive testing (NDT). Completed assemblies are delivered to the Airbus fuselage assembly line in Saint Nazaire, France.

The next stop is the 2,000-square-meter STELIALAB R&T center, which occupies the left half of IndustriLAB, a regional technology and training facility located just to the south of the STELIA gated complex. STELIALAB activities are dedicated to composites, assembly and digital technologies.

Leaving the clean room, we enter the AFP room occupied by a Coriolis machine that can lay parts up to 4 meters in length. Dedicated for R&T, Maire-Vigueur notes it is occupied for more than 200 days per year. STELIALAB has developed a process for integrating AFP-created dry stiffeners and skins that are cured out of autoclave (OOA) using an oven or self-heated tools. “We prefer LRI with lower injection pressure because we can use cheaper tools,” says Maire-Vigueur.

This AFP machine was also used to lay up the skin for the all-thermoplastic composite (TPC) helicopter fuselage/tailboom demonstrator as part of the ARCHES TP development program. Displayed at the 2017 Paris Air Show and also at JEC World in 2018 and 2019, it was made using 8 tows of 0.25-inch wide carbon fiber/polyetherketoneketone (PEKK) tape with laser heating. “We integrated the lightning strike protection with the AFP during layup,” notes Maire-Vigueur. “The skin was OOA-cured using Kapton bagging film, which is actually not very convenient.” Omega-shaped stringers were made from purchased unidirectional tape flat panels that were stamp-formed by Aviacomp (Toulouse, France). The same process was used for frames, but using plates made from woven material supplied by Porcher (Badinières, France) and stamped at Cetim (Nantes, France). Though the frames were mechanically fastened in standard fashion, the stringers were attached using automated, dynamic induction welding. “This enables lower cost and new design possibilities,” notes Maire-Vigueur. “We also demonstrated overmolding for attachment points, such as for electrical harnesses.”

When asked about the program’s challenges, Maire-Vigueur cites the layups, welding and 15-month timeline. “Even achieving the stamping without too much distortion in the woven material was not easy,” he adds. Though the tailboom design was completed by STELIA Aerospace’s Toulouse design office, all of the production was supervised by STELIALAB. However, ARCHES TP was just one step in STELIA Aerospace’s thermoplastic composites roadmap. The company continues to develop TPC technologies to demonstrate the feasibility of a full-scale TPC fuselage in the following years.

Exiting the AFP room, the tour proceeds through a very large, open hall that is sectioned into secure “development cells” by temporary walls to protect intellectual property. Walking across the hall and turning left, we reach an area with a small Scholz (Coesfeld, Germany) autoclave capable of 450°C, and an injection machine for resin infusion. “Because our roadmap is to cure OOA, we actually use the autoclave like an oven, curing thermoplastic composites without pressure,” explains Maire-Vigueur. There is a curtained trim room and an area next to it with NDT equipment, including a small C-scan system.

We turn again and enter a large test laboratory. “We can study polished cross-sections for quality control and materials and process investigations,” says Maire-Vigueur. The lab also features a Romer (Hexagon Manufacturing Intelligence, Shropshire, U.K.) arm for coordinate measurement, and equipment for fiber volume ratio, hardness and chemical testing. “All of the engineers in our R&T team are able to do their own materials and process control,” notes Maire-Vigueur. “We train them to be able to operate from design through manufacture to inspection and test of final parts. This is important to understand the whole process and enables quick assessment of suspected issues and their causes. Design is not separated from manufacturing and quality testing.”

The final stop is a large automatization lab within one of the walled off areas. A brief glance inside shows work exploring new assembly using robots and cobots. “We are looking at further development of smaller, more functional tooling and trying to imagine how you could put parts together faster and with lower cost,” says Canal. “Our culture is one of pushing boundaries and breaking new ground. We have been a leader in implementing robotics and now we are a leader in pushing composites technology. We have demonstrated our ability to rethink and re-envision the future and we will never stop.” 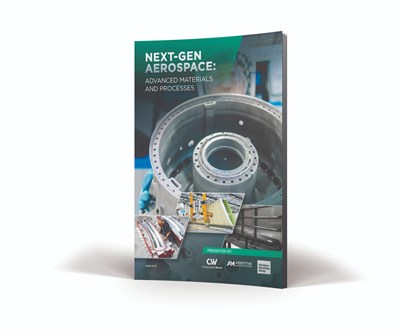