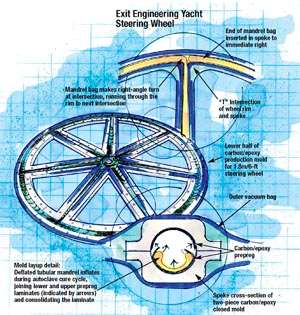 Source: Exit EngineeringExit Engineering's first one-piece carbon/epoxy steering wheel was this elegant three-spoked design with striking curvature accented by the pattern of the carbon twill fabric. The inset shows the prepreg layup scheme at the junction of spoke and rim, in the wheel's original gel-coat-and-fiberglass mold.

Source: Exit EngineeringProduction tools for both wheels (the tool for the larger wheel is shown) are made from high-quality carbon fiber prepregs to ensure mold stability and long useful life.

Racing yacht designers are under similar pressure to save weight as their counterparts in aerospace manufacture, not only in the larger structural components, such as hull and deck, mast and spinnaker, but everywhere an extra pound may be trimmed without compromising performance. For that reason, current practice in yacht manufacture is to make the spoked steering wheels (of which there are often two, one on each side of the boat) from carbon fiber-reinforced composites. For the wheel, the design driver for weight savings is not only the direct benefit of a lighter boat but, more importantly, the need to reduce the inertia of a wheel that can be as a large as 1.8m/6 ft in diameter, to aid manoeuvrability and boat responsiveness. Many races are won by just one good tack, executed when the competitor is not expecting it or in response to an unexpected shift in the wind direction!

A puzzle with one piece

Until recently, yacht builders have used one of two multipart manufacturing options. Either the wheel is molded in two halves, each incorporating spoke and rim elements, and joined in the plane of the wheel or wheel spokes are molded separately and subsequently joined to a one-piece rim. While both solutions minimize tooling costs, they carry a weight penalty and require secondary bonding, as well as the additional cost of hand finishing of the joints followed by filling and painting.

Italian composite manufacturer Exit Engineering Srl of Fiesso d'Artico, just inland from Venice, has come up with an innovative one-piece steering wheel solution that not only exceeds the performance of multipart designs for minimum weight and inertia, but comes finished from the mold, with no need for paint.

Unlike many marine manufacturers, who use open molding and wet layup, Exit is committed to applying advanced composite technology to the task of optimizing product performance and weight goals. Exit technical director Giuseppe Bottacin spent his early career as an aerodynamics engineer for the racing team of a world-class manufacturer in the motorcycle market, one of the earliest massmarket industrial segments to recognize the advantages inherit in aerospace composite engineering. As a freelance designer, Bottacin later produced aerodynamic housings for leading motorcycle manufacturers in Europe and Japan before bringing his experience to Exit's marine product line. Under Bottacin's leadership, Exit design engineers resort to secondary bonding only when absolutely necessary due to design constraints or in the rare case when the advantages of a secondary bond outweigh its disadvantages.

In the case of yacht steering wheels, Exit was determined to develop a manufacturing method that would allow a joint-free, hollow, one-piece structure to be made from autoclave-curable prepreg materials. In this way an optimized structure could be made to take the fullest advantage of the properties of aerospace-grade materials and an efficient geometric configuration. It was recognized early on that the tooling costs were likely to be higher for a one-piece wheel than one made from individual parts. In order to compete on price with the bonded, multipart wheels made by competitors, the extra tooling costs had to be offset by eliminating the assembly and finishing operations.

Yacht wheel design requirements are defined in standards developed by the International Organization for Standardization (ISO 8847), which cover both tangential loads applied to the rim while steering and axial loads produced, in part, by forces imposed by the weight of crewmembers as yachts pitch and roll in choppy seas. It is said that one of the most frequent causes of wheel failure is, in fact, an impact from a crewmember after a sudden stop, caused by running aground! The actual test loads specified are 670 Newtons (N) applied axially and 445N applied tangentially, both at the rim. These loads have to be sustained for 10 cycles of 5 seconds each.

Two wheels have been developed and are commercially available. The first, a relatively small, three-spoke wheel, has a diameter of 935 mm/36 inches and weighs 1.48 kg/3.26 lb. It was followed by a much larger 1840-mm/72-inch-diameter wheel, featuring seven straight spokes and weighing 3.6 kg/7.9 lb. Both wheels are made entirely -- with the exception of the metal center hub -- from carbon fiber/epoxy composites. Hubs, which must be matched to yacht steering mechanisms, are bonded into place prior to delivery when the key or spline details of the customer's yacht are known.

Based on previous experience using finite element modeling (FEM) to design composite masts, Exit's design team was confident that it could achieve a conservative design that would meet performance requirements. The complex, double curvature shapes of the original small wheel were modeled using CAD software, to create a "virtual wheel." Using the complex shapes from the CAD model, a master model of the wheel was CNC-machined from high-density resin. A prototype closed mold, which splits centrally in the plane of the wheel, was then made from the model using gel coat and fiberglass. Using les-sons learned on the small wheel, Exit also developed the mold for its larger, straight-spoked wheel. Production tools subsequently were made using high-quality carbon fiber prepregs supplied by Advanced Composites Group Ltd. (Heanor, Derbyshire, U.K.) to ensure mold stability and long useful life as well as an excellent surface finish straight from the mold. (One half of the large wheel's production mold is pictured on p. 46).

Testing confirmed that the FEM prediction of a conservative design was correct: the wheel was significantly overbuilt, performance-wise, but its weight, at 2.2 kg/4.8 lb, was only marginally better than wheel weights achieved by competitors with conventional multipart designs, whose products weighed between 2.25 kg/5.0 lb and 3.5 kg/7.7 lb. Refinement of the model and five further prototypes allowed the one-piece design, with a 60:40 fiber/resin ratio, to still exceed the axial load requirement by a factor of three, but at a lower weight of only 1.48 kg/3.25 lb -- a savings of more than 20 percent compared to multipart designs.

The complexities of compaction

The more significant challenge, however, was development of a manufacturing process that would enable the molding of such a complex hollow structure from carbon prepreg in a cost-effective way. Exit uses a clever variation on bladder molding that requires no separate device to inflate tubular mandrels placed inside the wheel rim and spokes of the wheel to consolidate the layup. The obvious difficulty -- how to connect the tube in the rim to the tubes in the radial spokes -- has been overcome by an innovative but deceptively simple solution. Exit uses multiple tubes, one for each spoke, made not from elastic materials, but instead fabricated from inexpensive vacuum bagging material, which simply remain in the part following cure. Each tube runs from the hub up one spoke and then makes a right-angle turn at the "T" intersection of the spoke and rim, running inside the rim until it reaches the next spoke, forming an upside-down "L." The end of each tube rests against the tubular bag coming up from the next spoke. The process is repeated for each spoke and adjacent rim sector. This elegant solution, as applied in the larger of the two wheels, is depicted in the drawing on p. 44.

The internal tubes are connected at the hub and from there to the outside of the bag that encloses the tool in the autoclave. In this way the autoclave pressurizes the interior of the spokes and rim, as well as the tool itself. Slightly different methods are used on the two wheels to link the tubes to the autoclave pressure. The larger hub on the 1840-mm/72-inch diameter wheel enables the seven tubes to be collected together in a central bag located in the hub. This, in turn, is connected to the external surface of the main bag, which encloses the entire mold. For the smaller wheel, with its small diameter hub, the three tubular bags run through a hole in one side of the hub. With open ends extending outside the mold, the three open tubes are sealed together and then sealed to the outside vacuum bag. The method of connection, a proprietary process developed by Exit, maintains continuity between the outer face of the outer bag and the inner faces of the mandrels, allowing the full autoclave pressure to inflate the mandrels and consolidate the material. Anticipating that an inflating bag end might interfere with inflation of the adjacent bag at each "T" intersection along the rim, the design team developed a compensatory technique for bag placement to avoid premature contact.

The materials used for the wheels are epoxy prepregs supplied by G. Angeloni Srl (Quarto d'Altino, Veneto, Italy). A mixture of woven and unidirectional materials are used, including 200 g/m2 Twill x 2, 416 g/m2 Twill x 2 and 410 g/m2 unidirectional. The wheels are autoclave-cured in a ramped two-hour cycle, with a full hour at the cure temperature of 120°C/250°F and at a pressure of 6 bar/90 psi.

Not resting on its laurels

Though a comparatively new company, Exit brought its innovative and complex composite wheel to market in a short 12-month timeframe. (Development of the smaller three-spoke wheel commenced October 2002, with first prototype in May 2003, and in July was fitted to its first yacht, launched in October the same year.) The marine industry recently recognized the achievement, when the steering wheel was nominated in November for the 2004 Dame Award, at the Marine Equipment Trade Show, in Amsterdam, The Netherlands. In addition, Exit has applied to patent its wheel-molding process, and several wheels have now seen a trouble-free year's service without showing any problems or generating complaints from the customers.

Exit, however, has already moved on to its next challenge. Its latest product, a carbon composite gangway for yachts, not only saves weight on the boat but, more importantly, makes the task of deploying the gangway easier and thus also safer, the company reports. In fact, Exit's new gangways have taken the industry standard for gangway weight and reduced it by half. A typical metallic 2.2m/86-inch folding gangway, for example, weighs about 15 kg/33 lb, but Exit's carbon fiber-reinforced plastic version weighs only 6.5 kg/14.3 lb.