At NPE2018, multiple companies displayed mold monitors that would allow the tool in an injection molding cell to “talk” to other equipment and remote computers. 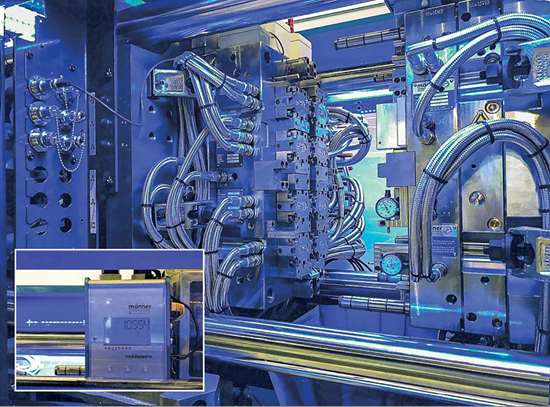 <p>M&auml;nner&rsquo;s new MoldMIND II module (inset) sits atop the tool communicating locally with the press and sending production data to the Cloud for remote access.</p> 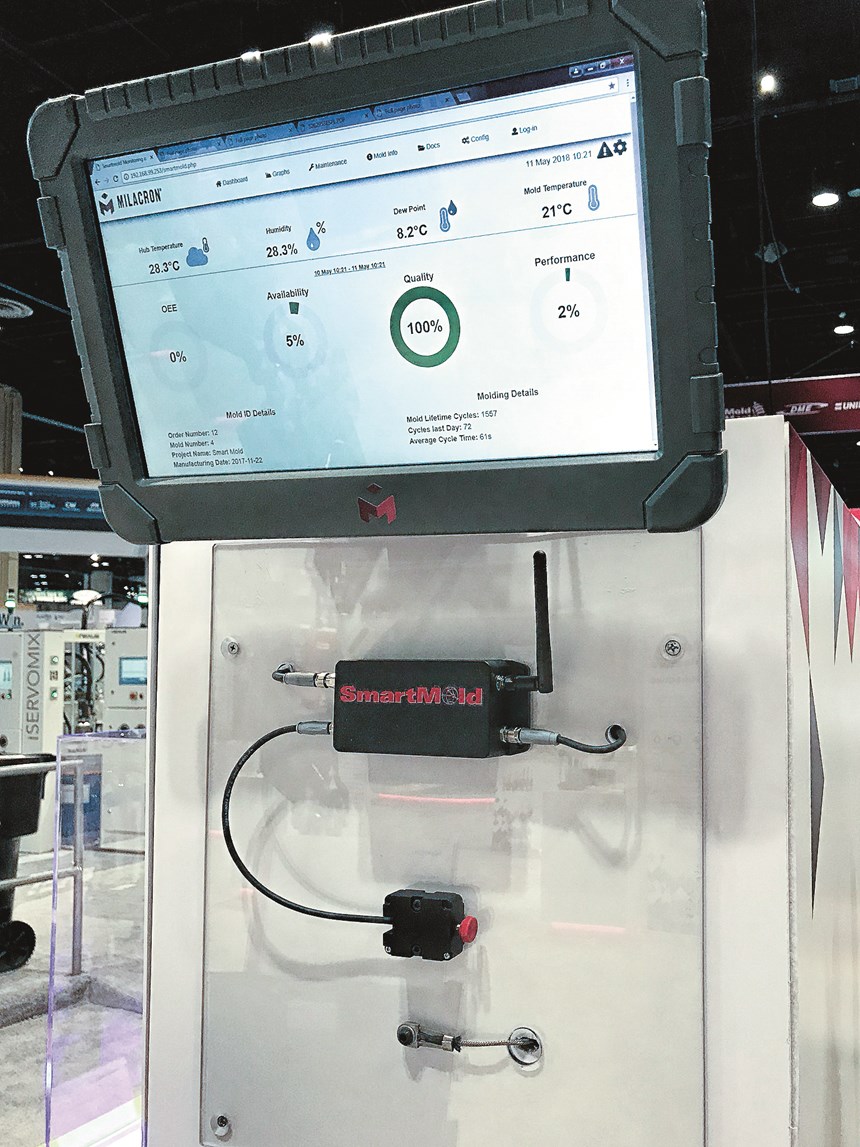 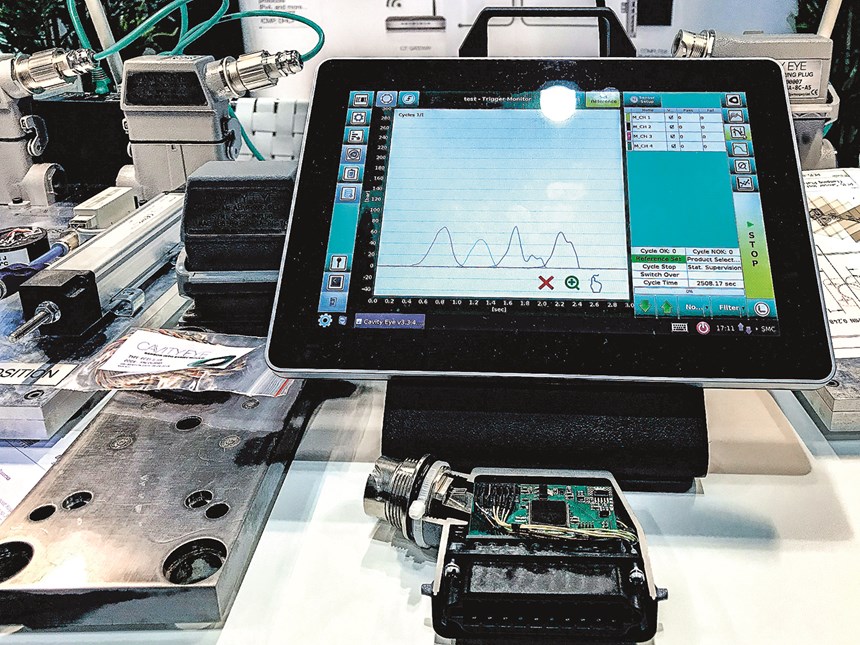 <p>Hungarian production-monitoring equipment supplier Cavity Eye displayed a prototype of its mold and process monitoring system at NPE. It plans to have a commercial version by October.</p>

The ongoing electrification and digitization of tools continued apace at NPE2018 this May in Orlando, as molds shift from one of the few mechanical holdouts in a cell to an active participant in Industry 4.0. In the past, shot counters or in-cavity temperature and pressure transducers conveyed some process and production information from a mold to the operator or perhaps the press itself, but this new class of monitors shares even more real-time production information in even more places, including up to the Cloud for advanced analysis.

Milacron discussed its SmartMold technology, which it says can serve up information on uptime, cycle count, temperatures, and more—locally or to the cloud, with  operators able to dial up a tool on a mobile device. In addition to storing documents, SmartMold can send alerts regarding operational issues or preventive maintenance. At its booth, Milacron displayed SmartMold technology in two cells—with an all-electric Roboshot 500 and new Quantum 260 servo-hydraulic toggle press. The device itself sits on the tool, while a separate screen at Milacron’s booth showed all the 10 tools throughout the show utilizing the technology. The units can show OEE (overall equipment effectiveness), calculated in the cloud before being displayed on the web.

Molds have shifted from one of the few mechanical holdouts in a cell to an active participant in Industry 4.0.

SmartMold can also tie into the molding machine, connecting inside the PLC to hook up the whole cell. For this program, Milacron has partnered with Cloud-based service provider ei3 Corp., which reportedly has 20,000 pieces of equipment in the field utilizing its technology.

Priamus System Technologies upgraded its Quality Monitor, at the heart of which is the new embedded QDaq system. This allows process monitoring without an additional PC. The system, which has an OPC-UA interface, can transfer injection molding process data and parameters, including information culled from cavity-pressure and cavity-temperature sensors, as well as information gained from the process, locally within a plant or globally, to the Cloud or remote locations.

The web-based software portion of the system can be viewed via any browser-supported display, and Priamus offers a specially developed 7-in. display with an LED signal—QScreen—as part of a complete package. At NPE, a Priamus representative pulled up production data onto an iPad from a Sumitomo Demag press running across the aisle. The data had made a stop-off in the Cloud before it was downloaded to the iPad, which then received an analysis of production, including OEE. For customers with global locations, the system allows real-time insights into production, including the measurement of viscosity, to track batch-to-batch changes in materials.

MOLD DATA IN THE ‘CLOUD’

Männer also launched a new monitoring system for injection molds at NPE2018. The company says its moldMIND II can detect errors early on, minimizing downtime. In addition to planning maintenance, Männer says moldMIND II pulls data that can be used to optimize production. Process values such as the actual number of cycles, minimum and maximum cycle times, temperature profiles, operating times, and downtimes of the injection mold are recorded and stored for access anytime. At NPE2018, a company representative pulled up a screen showing operating tools in Germany, the U.S. and China before clicking on the Chinese tool to display its real-time stats.

Männer’s second-generation monitor has various interfaces as well as storage and application options. Alarms can be set, and the system can log events, including temperature deviations, sensor breakage, or downtime. If there are critical deviations from a setpoint, an alarm signal can be sent to a smartphone for quick troubleshooting or directly to an MES (manufacturing execution system) central computer. Control signals can also be output via digital I/O—for example, to automatically stop the injection molding machine in the event of a malfunction.

As is increasingly important in markets like medical and automotive, Männer says moldMIND II documents all processes inside the mold throughout its lifecycle. Access to this data can be assigned based on individual authorization levels. Internal memory can also store tool master data or user-manual documentation.

Data stored in the moldMIND II Cloud can be remotely accessed from any location via smartphone app, Bluetooth, WLAN, Ethernet, USB or OPC-UA. Mold owners can use a GPS module to obtain an overview of the exact location of their molds.

In addition to planning regular maintenance with moldMIND II, including spare-parts management and mold refurbishment, Männer is working towards gathering data for predictive maintenance. “The collection, storage, and analysis of real-time data will enable predictive maintenance,” the company states. “This approach will allow early prediction of malfunctions and make it possible for breakdowns to be avoided.”

In Orlando, the company also discussed how the system is pushing towards artificial intelligence (AI), wherein data pulled from temperature sensors or vibration sensors in the machine could create a warning that cooling or heating on the press may not be working, stopping the press before bad parts are made. “We aim to make the molding process independent from the operator,” a Männer spokesperson explained.

As reported in our April NPE2018 Show Preview, Progressive Components introduced the pairing of its CVe Monitor electronic mold-monitoring device to its CVe Live wireless device, which relays data to the Cloud-based CVe Live website.

Glenn Starkey, president of Progressive Components, notes that the company started mold monitoring in 1993 with its first cycle counter, followed shortly thereafter with a software program: ProFile. Among many other benefits, Starkey said the new technology’s GPS capability better serves today’s molding industry. “In the past, you were dealing with custom molders—small operations, one plant,” Starkey notes. “But because of mergers and acquisitions, you get much larger corporations that can lose molds all the time. There are times when companies build new tools because they can’t find the old ones.”

Hungarian firm Cavity Eye displayed a prototype of its new mold and process control and monitoring system, SMC (Smart Molding Control). A company spokesperson says its plan is to bring a finalized product to the Fakuma show this October in Germany. The system consists of a Smart Measuring Plug (SMP), Smart Control Plug (SCP) and a Monitor, Switch and Computer (MSC).

Using a microcomputer and sensor network, the SMP measures and sends pressure curves to the control plug, which then communicates to the press and the robot, helping control the molding process’s switchover point from filling to pack-and-hold via 24V digital signals. The SMP can connect to a laptop, and measurement can be run on eight to 32 pressure sensors simultaneously.

“There are times when companies build new tools because they can’t find the old ones.”

The company says Cavity Eye provides an economical means to manage mold transfers (determining best process settings), new tool qualification, or failure analysis of existing tooling. Cavity Eye offers four different sensors with pin diameters from 0.8 to 20 mm and maximum load forces from 1000 to 40,000 N (225 to 9000 lbf). The MPM central mold plug collects all the wires of the pressure sensors and can control up to 32 sensors at once. Process parameters including reference curves, tolerances, switchover pressure, and more are uploaded to the built-in memory.

Austrian moldmaker Haidlmair also discussed its tool-tracking software, called Mold Monitoring 4.0 (MM 4.0) at NPE2018. Launched in 2016, the system uses proprietary software and thermocouples wired to the entire tool, as well as a flow sensor to track key mold and machine parameters. Haidlmair says the technology allows active control of the mold during injection, while giving molders a personalized user portal with access to mold documentation as well as injection parameters like cycle times, piece counts, mold pressures, temperatures, and more. Alarms can be set for out-of-spec parameters as well as maintenance. When installed, the system consists of boxes placed on both halves of the tool.