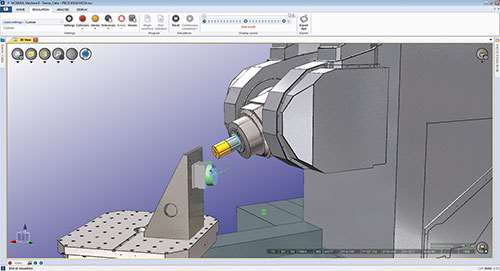 Fundamentally, NC simulation provides a virtual preview of a computer-programmed machining process. It enables programmers to watch how cutting tools will remove material from a workpiece according to the tool paths generated by a CAM software system. Interactions among the cutting tool, workpiece, workholding fixtures, machine structures and other elements can be observed to detect possible collisions, inefficiencies or missing operations.

Spring Technologies has a fundamentally different vision for NC simulation. The company, based in Paris, France, with a U.S. marketing and support arm in Cambridge, Massachusetts, sees NC simulation as the basis for a comprehensive virtual model of an entire manufacturing enterprise. This is the concept behind the company’s recently launched NCSIMUL Machine 9 NC simulation module, which is designed to be the cornerstone of its “NC Experience” strategy. This simulation module integrates the creation of cutting tool libraries, optimization of cutting conditions, and simulation and optimization of toolpath programs. It also enables users to publish the manufacturing data needed by shopfloor operators over secure networks.

To characterize this so-called NC Experience, Olivier Bellaton, general manager of Spring Technologies says, “Our customers will be stepping into an NC simulation environment that is more realistic, intuitive, integrated and hands-on, with extended functionalities dedicated to multitasking and multi-axis machining centers.”

In keeping with this larger strategy, the module has been developed to interconnect with other software packages essential to integrated enterprise management such as material resource planning (MRP) and manufacturing execution systems (MES). In addition, the new module supports mobile devices so that manufacturing data is available and accessible at all times, from a CAM workstation to the NC operator or any authorized employee using a touch-sensitive tablet anywhere in the company.

The functionality of the new module for NC simulation has been significantly enhanced as well, the company says. For example, the user interface implements ribbon technology navigation, a familiar feature in Office 2007 applications whereby commonly used tasks are exposed automatically so users do not have to search through menus that drop down from task bars. Tasks are broken into subtasks, with intuitive, context-sensitive icons for guidance.

Viewing 3D displays has been enhanced with more realistic, more accurate rendering. Likewise, the module makes use of hardware platforms with multi-core processors and multi-threading capability, so that collision detection and material removal calculations are performed simultaneously. Algorithms have been revised to support automated program editing, probing, 3D dimensioning, project management and other utilities, the company says.