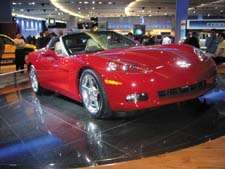 The North American International Auto Show (Jan. 10-19 in Detroit, Mich.) was the forum for a number of new model introductions, many relying on composites to provide styling or critical functionality. While the exhibition showcased 2004 vehicles available for purchase, automakers also offered sneak peeks at a handful of 2005 models slated for production later this year. Manufacturers from around the world were represented, emphasizing the global nature of the business.

The show was a "comeback" showcase for sheet molding compound (SMC) in class-A body panels on North American vehicles, and a victory for members of the Automotive Composites Alliance (ACA) who have committed considerable resources to resolving the problem of paint "pops." (ACA executive committee chairman David White provides his perspective on the "pop" phenomenon in this issue, on p. 7). These defects occur as air trapped in the composite escapes during the high-temperature painting processes. Solutions in evidence at the show included tougher matrix resins, such as the ATRYL "Tough Class A" (TCA) system jointly developed by molder ThyssenKrupp Budd (Troy, Mich.) and resin supplier AOC (Colliersville, Tenn., U.S.A.). Others involved innovations in primers and sealers, such as the UV-activated hybrid sealer developed by BASF (Southfield, Mich.) and the "Pop Free" series of thermally cured primers from Red Spot Inc. (Westland, Mich.).

With paint pops licked, the ACA and automakers have formed several consortiums to address poor SMC cosmetics in the powder-coating process, to which the OEMs are migrating for priming and painting of steel panels. Steve McKenzie, ACA board chairman and president of Meridian Automotive Systems' exterior composites group, sees powder priming as the next big breakthrough and is confident a solution will be found.

New SMC applications on display at the auto show included the composite roof module and endgate on the 2004 GMC Envoy XUV. The SMC roof panel is light, thermally stable, strong and UV resistant, and moves forward to make room for tall or bulky cargo in the rear loading area. Multiple materials are used in the endgate assembly of the new Hummer H2 SUT (lower photo). A structural SMC reinforcement is adhesively bonded between a class-A SMC outer panel and a structural reaction injection molded (SRIM) inner panel. The endgates are supplied to GM by Meridian with topcoats that have been matched with body colors. The redesigned 2005 Chevrolet Corvette (upper photo) attracted a lot of attention, with SMC in the hood, doors, rear quarter panels, roof and reinforced RIM in the fascia and fenders. The base and convertible versions with the 400 hp LS2 engine hit the streets this summer, and are strictly fiberglass composites — no word yet whether the 2006 Corvette Z06, set for a mid-2005 release, will have carbon fiber content, following the successful development of a carbon fiber hood for the 2004 Z06 Commemorative Edition.

Speaking of carbon fiber, there was plenty on the show floor: The Porsche Carrera GT and the Mercedes SLR McLaren were prominent, each containing considerable quantities of carbon not only in the body panels, but in the structure, as well. The Porsche exhibit included a naked carbon fiber cockpit and engine cradle, giving visitors an inside look at the vehicle's structural members. Other vehicles with carbon fiber components included the Lamborghini Murcièlago, Saleen S-7, Dodge Viper, Ford GT, Mazda RX-8 and Nissan 350Z. In addition, a special area devoted to the rapidly growing "tuner" market featured a host of aftermarket components in fiberglass and carbon, such as hoods and spoilers. ACA's McKenzie sees very high interest in carbon fiber among the North American OEMs. While the weight savings potential is attractive, costs are still a hurdle, but McKenzie believes the latter are being approached aggressively.