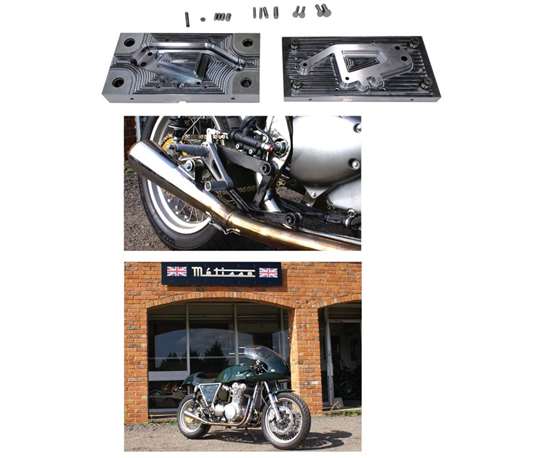 Métisse Motorcycles (Faringdon, Oxfordshire, UK) participated in a Cranfield University development partnership in which the part highlighted in the close-up photo was designed and prototyped in compression-molded carbon fiber composite.

Since 1959, Métisse Motorcycles (Faringdon, Oxfordshire, UK) has built a loyal following among riders and racers around the world. The late Hollywood action-film star and top amateur racer Steve McQueen described his Métisse Mk3 as the “best-handling bike I’ve ever owned.” Despite their classic retro styling, Métisse bikes incorporate many modern mechanical technologies that reduce overall weight and increase performance. Among them are hand-laminated GRP parts for the five-piece bodywork moldings on the Mk 5 Cafe Racer bike.

For that reason, Métisse was invited in 2016 by two students at Cranfield University (Cranfield, Bedfordshire, UK) — Aurele Bras and Andrew Mills — to participate as a development partner in a UK-funded project aimed at rapid production of lightweight carbon fiber composite automotive structural parts. The project, dubbed MultiComp (Design and Processing of Multi-Layer Structures for Liquid Composite Moulding), was funded by the Centre for Innovative Manufacturing in Composites (CIMComp), as part of the UK’s composites research and development strategy, itself funded by the UK government’s Engineering and Physical Sciences Research Council (EPSRC).

The Cranfield students already had developed and optimized a new high-speed compression molding process that combines strategically placed uni prepregs with molding compounds, but needed a part for demonstration and validation. Métisse agreed to join the project, to test out a composite footrest bracket that would replace an aluminum version. Trademarked HexMC-i molding compound and HexPly unidirectional carbon/epoxy prepregs were supplied to the Cranfield team by Hexcel (Stamford, CT, US). Both materials were formulated with Hexcel’s snap-cure HexPly M77 epoxy resin.

The students worked with Métisse engineers to optimize the composite part for production, with a detailed stress analysis, steel tool design and a fabrication plan. Key to the molding process was combining uni prepregs with the molding compound without compromising overall cure time, and using prepreg only where needed for the design. The students showed that the hybrid approach delivered a significant performance-for-weight improvement vs. a standard composite sheet molding compound (SMC), and the finished bracket weighed 50% less than the all-metal original. All mounting hardware was molded-in, resulting in a ready-to-use, cured part that required no secondary machining. Overall production time for the composite bracket was just under 3 minutes in a lab environment, but should translate to a complete cycle time of less than 2 minutes in an automated production cell.

Although Métisse Motorcycles expects to keep production volumes low, with its team of craftsmen that hand-built bikes to order, the Cranfield/Hexcel collaboration, say those involved, has validated the use of a HexMC-i and HexPly UD hybrid approach to replace complex cast, machined or forged metallic parts that could not previously be formed with composites in a high-rate, cost-effective process. Métisse’s owner, Gerry Lisi, comments, “This new, cutting-edge Hexcel carbon fiber part is most definitely in the spirit of the Métisse brand.”