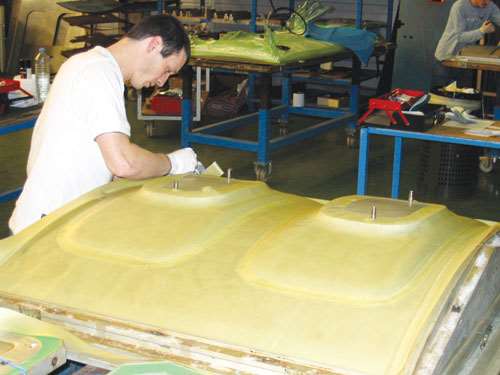 When Composites Atlantic Ltd. (CAL, Lunenburg, Nova Scotia, Canada) contracted to produce 10 types of parts for leading edge and rudder components and deliver them on a biweekly schedule to a key aerospace customer, trouble soon cropped up. “We had slipped dangerously behind schedule in manufacturing and deliveries,” says Séverine Guitton, CAL’s head of quality and methods. Debonding between two plies of aramid material in four of the parts was discovered using ultrasound methods. In the case of one leading edge part, the scrap rate had reached 13 percent, and rework, 28 percent. Guitton says there was no logic to the defects because manufacturing procedures were constantly checked and found to be in compliance with quality requirements. The issue jeopardized the customer’s confidence, notes CAL’s COO Derek Kinsman.

CAL turned for a solution to Intercim LLC (Eagan, Minn.), a provider of Manufacturing Operations Management (MOM) software. Its trademarked Pertinence Suite Powered by Velocity, an off-the-shelf “rule-driven” execution solution, reportedly can track and compare hundreds of historical process parameters and inspection/test results for past part shipsets in a common database. Even when each individual parameter is correct, there are hundreds of interrelationships among all of the design and manufacturing steps. Intercim’s software examines both to identify the pattern (or patterns) that might inadvertently have an impact on a part and suggest manufacturing changes that could eliminate defects.

CAL initially leased the Process Rules Discovery module. After three-days of training, Guitton entered more than two years of records for the most severely impacted parts, including all parameters recorded at various stages of the manufacturing process. After just one week of analysis, two apparently unrelated and, until then, unsuspected steps proved to be influencing the debonding issue: resin viscosity and the time period between part bagging and autoclave cure. Alterations dropped the part scrap rate to zero, and reduced rework to <1 percent, reports Guitton. “Our changes allowed us to catch up on back orders and regain our customers’ trust,” adds Kinsman. The Pertinence Suite software package, since purchased by CAL, is enabling analysis of other parts and processes.