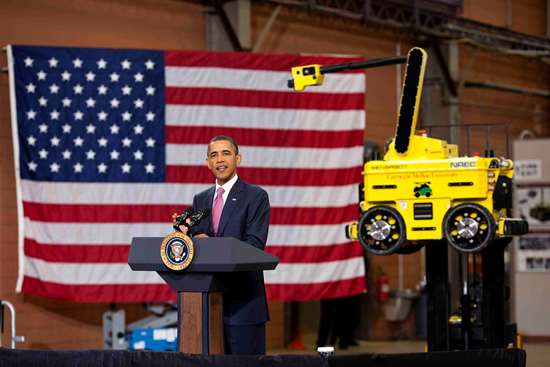 President Barack Obama launches the Materials Genome Project following a tour of the National Robotics Engineering Center at Carnegie Mellon University in Pittsburgh, Pa., on June 24, 2011. The President emphasized the need to focus on cross-cutting technologies that will enhance the global competitiveness of U.S. manufacturing and speed the transition from drawing board to manufacturing floor. Source: The White House/Photo: Pete Souza

The Materials Genome Project will help accelerate the transition of new technology through the often torturous stages it must go through before it is of benefit to society. Source: OSTP

This graph exemplifies the expectations for the Project in terms of the number of new technologies that will be spawned, and the length of time it will take them to come to fruition. Source: OSTP

Progress is underway for the Materials Genome Initiative (MGI). This public/private endeavor, launched by the Obama Administration in mid-2011, committed the federal government to work with industry and academic partners to double the pace of advanced materials development. Program goals include vehicles that are safer and more fuel efficient; packaging that keeps food fresher and preserves nutrition; armored vests that better protect soldiers; and metals that can tolerate extreme temperatures and radiation in spacecraft and satellites.

CT: How does the MGI program interact with the composites manufacturing industry?

CW: MGI is a multi-agency effort that supports all industrial sectors involved with advanced materials systems, ranging from electronic materials to lightweight composites. As a materials class, the composites manufacturing industry has already played an instrumental role in shaping the MGI. For example, early in the genesis of the MGI, the OSTP had direct engagements with over 12 materials professional societies including, SAMPE [The Society for the Advancement of Material and Process Engineering (Covina, Calif.)] TMS [The Minerals, Metals & Materials Society (Warrendale, Pa.)], MRS [The Minerals Research Society (also in Warrendale)] and ACerS [The American Ceramic Society (Westerville, Ohio)], all of which represent members in the composites field. Furthermore, in the first two fiscal years of the MGI, the federal government has made more than 70 R&D grants across the Departments of Defense and Energy, the National Science Foundation [NSF] the National Institute of Standards and Technology [NIST] and the National Aeronautics and Space Admin. [NASA], including a number that involve the ceramics sector. A good example is the five-year, $10 million effort launched last year by the Air Force Research Laboratory’s Materials and Manufacturing Directorate on advanced polymer matrix composites (PMCs) for aerospace systems.

CT: What impact is the MGI expected to have specifically on the composites manufacturing industry?

CW: To appreciate the significant impact that the MGI can have, consider that the full potential of applying advanced PMCs to aerospace systems is limited today by the lack of integrated simulation tools that capture enough detail to adequately represent the complexity of these high-performance materials in systems design. As noted above, the Air Force Research Lab is leading an industry/academia/government laboratory collaboration that involves General Electric, Lockheed Martin, Autodesk, Convergent Materials, the University of Dayton Research Institute and the University of Michigan to provide the aerospace industry with the integrated engineering tools needed to account for this material’s [PMC] complexity across different spatial and temporal domains.

For example, industry currently lacks an ability to link the chemistry of PMC processing with mechanical performance, particularly the load response and damage evolution for high-temperature PMCs. Therefore, the current design process relies on incrementally building confidence in composite performance for a specific application by repetitive analysis and testing, resulting in component designs that are overly conservative or inadequate for areas where the structure is complex. These tools will be used for design of an airframe wingbox and an engine bypass duct to demonstrate reduced cost, time and risk for the insertion of these materials into use. In addition, reduced conservatism in designs and accelerated transition of next-generation materials will enable performance improvements, resulting in significant fuel savings for both military and commercial aircraft.

CT: What is likely to happen to MGI at the end of President Obama’s Administration?

CW: MGI is not just a federal initiative — it is a growing movement both inside and outside of the federal government. From the government perspective, the MGI now includes active engagement by five federal agencies which are participating in two ways: Individually through their mission-related activities (including funding programs such as the NSF’s “Designing Materials to Revolutionize and Engineer Our Future”) and focused investments such as the NIST’s upcoming Center of Excellence in Advanced Materials, and also in a coordinated fashion through the Subcommittee on the Materials Genome Initiative of the National Science and Technology Council — a cabinet-level interagency coordinating body overseen by the White House. At the same time, the private sector — both industry and academia — has made great strides in adopting and internalizing MGI’s goals and approaches to innovations, with a growing number of university departments and research institutions committing to advance the principles behind this initiative.

At the two-year anniversary of MGI this past June, OSTP announced a number of new private sector commitments and the addition of seven more academic institutions embarking on new educational efforts around MGI goals that include curricula development, new graduate degrees and research opportunities. These recent announcements [see “New commitments to MGI,” p. 20], in addition to those made more than a year ago, demonstrate the long-term commitment the materials research community has made toward achieving the goals of MGI — a commitment we expect will continue well beyond the current administration.

For further information about the Materials Genome Initiative, visit www.whitehouse.gov/mgi. Those interested in getting involved in the initiative can send an e-mail to mgi@ostp.com.

Commitments to the Materials Genome Initiative (MGI) announced this year build on support from five participating MGI agencies — the U.S. Departments of Defense and Energy, the National Science Foundation (NSF), the National Institute of Standards and Technology (NIST) and the National Aeronautics and Space Admin. (NASA) — which, in 2012, made more than 70 awards to support MGI-related research, totaling nearly $63 million. The academic and private sectors have responded in kind. More than 60 universities and companies committed to advance the MGI through education and research, including the release of material properties databases and partnerships among universities, industry and national labs. Other news: