A massive concrete water storage facility in Bogotá, Colombia, gets a much-needed makeover with the resin transfer molding of 840 large composite domes that keep the water potable.
#insidemanufacturing #outofautoclave

Workers install one of 840 composite covers manufactured via resin transfer molding (RTM) by composites fabricator Soling. The massive covers weigh 705 pounds each and protect the Casablanca water storage tank in Bogotá, Colombia, which holds up to 38 million gallons of water and is the largest water storage system in the country. Photo Credit: Soling

Water storage and delivery in Bogotá, Colombia, like for any large urban area, is complicated. The challenge is not one of supply, for the city of some 9 million people receives 32 inches (824 millimeters) of rain each year, plus the Bogotá River flows through the city. The challenge is to capture that water, treat it and then store it so that it remains potable and available as needed by residents and businesses. To do this, Empresa de Acueductos y Alcantarillados (Company of Aqueducts and Sewers, EAAB, Bogotá) has, over the years, constructed a series of 59 tanks throughout the city to store treated water and ensure supply to customers.

Some of these tanks are actual tanks — fully enclosed to protect the water from the outside elements. Others, many of them older, are massive concrete basins protected from the elements with a series of removable covers. One such tank, called Casablanca and located in the Ciudad Bolivar neighborhood in the southern section of Bogotá, serves a population of about 3 million people. Casablanca, the largest water storage tank in the EAAB network, and the largest water storage tank in Colombia, measures 144 meters (472 feet) long x 110 meters (361 feet) wide x 9 meters deep and has capacity to store 143,000 cubic meters (38 million gallons) of water. The tank is bisected by a concrete divider running down its middle so that water is stored in two equal sections. 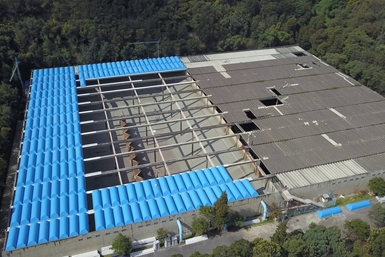 The 66-year-old Casablanca tank is bisected by a concrete divider that allowed EAAB, the Bogotá water and sewer agency, to empty one half of the tank so that covers could be installed. The old concrete and asbestos covers, on the right, were subject to breakage and costly to maintain. It’s expected that the composite covers will have a longer life and require less maintenance. Photo Credit: Soling

Maintaining the 66-year-old Casablanca is no easy task. In 2009, it was discovered that cracks in the concrete floor of the tank were allowing 360,000 liters (95,000 gallons) of water to escape each hour. Repairs to the concrete with a polyurea coating reduced leakage to zero. Casablanca, however, still had a problem above the concrete. Water in the tank was protected by a series of covers that consisted of a mix of concrete and asbestos, which posed a significant threat to water quality and human health. The old covers were also prone to failure and were expensive to maintain. EAAB needed to replace the old covers with a safer, lighter, more durable alternative.

Big covers, and a lot of them

EAAB decided to pursue a composites solution for the covers, but was challenged immediately by the scale of the project. Casablanca is crisscrossed by a series of concrete pillars that support a network of beams on which the covers rest. These beams are spaced about 7.2 meters (23.6 feet) apart, thus the new covers would have to be self-supporting and cover that span to make use of the existing infrastructure. EAAB proposed that such covers be manufactured via light resin transfer molding (LRTM). The challenge? Composite structures of this size required for this application had never been manufactured via LRTM in Colombia. Many fabricators simply were unable to take on the project. 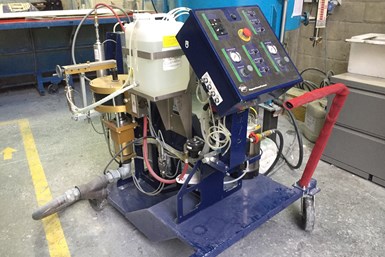 The exception was Innovative Engineering Solutions, or Soling, a composites fabricator located in La Estrella, Antioquia, Colombia, just south of Medellín. Soling was founded in 2014 by Javiar Moreno, who owns and operates several composites manufacturing companies in and around Colombia. Rodrigo Vergara, engineering coordinator at Soling, says the size of the covers was a non-starter for many fabricators. “Nobody had experience with this in Colombia because of the size of the part,” he notes. “It is the biggest composite part fabricated in Colombia.” For Moreno, however, the size of the covers was an interesting challenge. “For our owner [Moreno],” says Vergara, “it was a dream come true. ‘Impossible’ is a word he doesn’t understand. He said, ‘We will do this!’ I said, ‘OK!’”

Soling proposed a specific solution for the Casablanca project: A series of 840 domed, rectangular composite structures, each measuring 7.6 meters long and 2.4 meters wide (24.9 x 7.9 feet). The semi-circular dome design was chosen, says, Vergara, because “the geometric shape that has the most mechanical resistance is a circumference. This was the main factor to guarantee that the covers were self-supporting. On the other hand, we had to find the easiest way to ship them from the manufacturing site to the installation point, which was 260 miles away.” 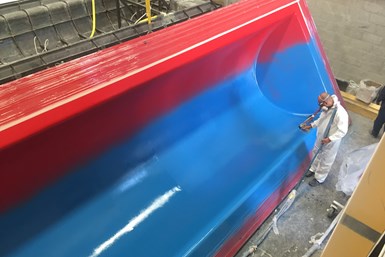 The female half of the mold used to fabricate the Casablanca covers is first sprayed with a blue gel coat, per EAAB’s requirements. Photo Credit: Soling

The covers would be manufactured via LRTM with, according to EAAB specification, a blue gel coat on the exterior surface and a white gel coat on the interior surface. Comprising glass fiber fabrics and a polyester resin, the cover, with a surface area of 28.5 square meters (207 square feet), would weigh 320 kilograms (705 pounds), 208 kilograms of which would be resin. With a design in hand and a commitment to deliver the covers, Vergara and Soling went to work.

Soling, of course, did not take on the Casablanca project without help. Working with the company was a supply network that included a distributor, a material supplier and an equipment supplier. The distributor, Minepro SAS (Medellín, Colombia), provided technical support and worked with equipment supplier Magnum Venus Products (MVP, Knoxville, Tenn., U.S.), which supplied pumps and auxiliary equipment for the LRTM process. The materials suppliers are Andercol (Medellín), which provided the polyester resin matrix, gel coats and technical support, and Jushi (Tongxiang City, China), which provided the E-glass fiber fabrics.

Manufacturing, naturally, begins with tooling. The question was how many molds the project required. To determine this, Vergara says Soling first had to establish the pace of manufacture to meet EAAB’s delivery requirements. This, in turn, was affected by requirements at the work site. To avoid potentially contaminating the water supply during installation of the new covers, EAAB agreed to empty the half of Casablanca over which covers were being delivered and lowered into place. Reducing Casablanca’s water storage capacity by half poses challenges, thus EAAB needed delivery and installation to happen as quickly as possible. 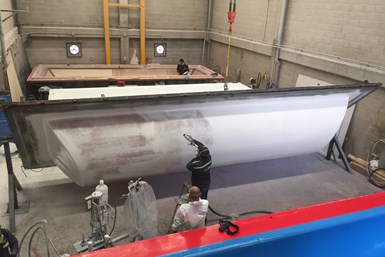 The male half of the mold for the covers is sprayed with white gel coat. The white, or interior side of the covers, face the interior of the Casablanca tank. Photo Credit: Soling

Soling, working with EAAB, explains Vergara, settled on a production schedule that would deliver six covers each day. In a facility running three eight-hour shifts per day, that necessitated two molds, each capable of fabricating one cover per shift. The molds, he says, were built in-house and were composed of a glass fiber composite male/female design backed by a steel support structure.

With molds built, Soling then began the work of establishing how, specifically, the domes would be manufactured. Working with Minepro and MVP, Vergara says it was decided each mold would be fed by two resin injection ports, with one vacuum port. For resin injection, MVP recommended use of its Patriot Innovator high-volume resin transfer molding (RTM) pump unit, which is capable of delivering the large volume of resin required by each cover. MVP also provided its Turbo Autosprue valves, as well as universal couplers, seals and mold accessories. 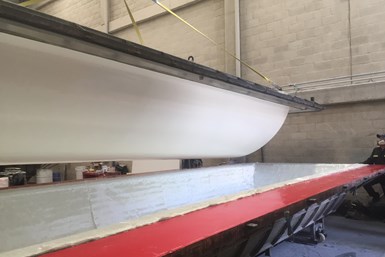 After glass fiber fabrics, supplied by Jushi, are placed in the female half of the mold, the male half is lowered into place via crane and the two haves are bolted together.
Photo Credit: Soling

Vergara says the sheer size of the covers, combined with strict weight and dimension requirements, posed the greatest challenge to their manufacture. Determining injection port location and managing injection timing required much trial and error and consultation with technical experts. Eventually, however, Vergara says Soling settled on a fabrication process that proved highly repeatable and dependable.

“The biggest challenge was the weight of the elements that we were going to install, because we could not exceed the load capacity of the existing structure,” Vergara says. “This required that all the pieces have the same characteristics, both in geometry and weight. The only way to guarantee these conditions was to use a process that guaranteed repeatability.”

Finished covers were shipped the 418 kilometers (260 miles) from Soling’s facility near Medellín to the Casablanca work site in Bogotá and then installed via crane, lowered onto the support structure and positioned by workers standing on the beams the covers would rest on. Although the covers are not mechanically fastened to the support structures, Vergara says they also are not designed to be moved or removed unless “something very serious happened.” 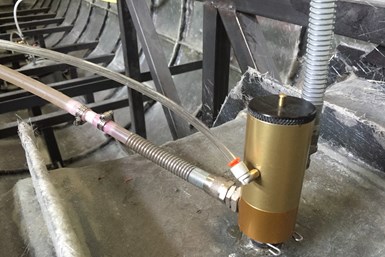 Soling built two molds to fabricate the covers. Each mold is fed resin via two injection ports (one shown here), and uses one vacuum port. Injection of the polyester resin, supplied by Andercol, took about 40 minutes. Soling produced one cover per mold per shift. Photo Credit: Soling

Soling began design work on the covers in early 2019 and started fabrication of the first covers in 2020. The coronavirus pandemic and occasional mechanical challenges caused manufacturing to stop and start, but Vergara says Soling completed production of all 840 covers over a period of 7-8 months, finishing in late 2020. It is expected that the new covers will last substantially longer and require much less maintenance than those they replaced.

The Casablanca project, Vergara says, has demonstrated Soling’s capabilities as a fabricator of high-quality, high-performance, large composite structures and has opened doors to other opportunities. “This project was a challenge in which we had to break paradigms that said that parts of this magnitude could not be made using this manufacturing method, and still we did it,” he says. “For the future of Soling, something is very clear: There is no project that we are not capable of doing.”

A finished cover is pulled from the mold and then trimmed to final shape. Each cover is 7.6 meters long and 2.4 meters wide. It features a semi-circular dome so as to maximize mechanical strength given the area each cover must span. Photo Credit: Soling