This is my second blog in this pre-CAMX 2019 series which highlights key technologies that were actually exhibited at CAMX 2018. This blog centers on Heraeus Noblelight’s new black.infrared system, a novel type of system for composites processing, and its humm3 technology, which is replacing laser and infrared heaters in automated fiber placement (AFP) machines.

Heraeus Noblelight innovates a wide range of industrial processes using the power of light. To give some background, all light is electromagnetic radiation (EMR) and has an inherent wavelength and frequency, as can be seen in the diagram below. Heraeus Noblelight develops devices that use light along a large portion of this spectrum, ranging from infrared (IR) emitters to LED lamps and ultraviolet (UV) systems, as well as arc and flash lamps.

Light along the Electromagnetic Spectrum is used for heating and processing.
SOURCE | https://mynasadata.larc.nasa.gov/basic-page/electromagnetic-spectrum-diagram (left) and Heraeus (right).

In composites, UV and infrared (IR) systems have been used for decades, as can be seen in the example below. The black.infrared system, however, is new technology.

“Usually, for a medium wave IR emitter, you’re more toward a power density of 60 kW/m2,” says Fricks, “but ‘Black IR’ achieves 200 kW/m2. IR is a much more efficient means of getting energy into a substrate versus heating all of the air around it, but Black IR is three times more efficient compared to a convection oven.  For inline processing, that means a conveyor could run three times faster or be shortened to take up less space. For example, a conveyor with a 30-foot long oven could be reduced to a 10-foot oven using Black IR.”

To date, applications for black.infrared systems include welding plastics and heating thin (microns-thick) photovoltaic films for solar cells. “IR, in general, works very well for atomic-level deposition,” notes Fricks, “for example, applying layers of gallium or patterns in silicon for semiconductors. Note, all of these operations are done in a vacuum. Black IR also operates well in a vacuum and at high temperatures.”

He explains that black.infrared emitters have been designed to operate with a surface temperature of 1000°C. “These emitters are all solid-state, so you can put one in an oven running at 700-800°C and it won’t suffer. However, if a process requires temperatures much higher than this, say 1500°C or higher, then short wave IR would be a better fit.”

Fricks explains that Black IR is also a line of sight technology. “It’s better for flat or simple convex/concave surfaces. The biggest issue is with parts or materials having internal or external areas where something will cast a shadow.”

Because black.infrared is a medium wave IR device, it’s relatively colorblind (white vs. dark), Fricks explains. “It won’t cook black materials or underheat yellow or white materials.” And yet, it reportedly takes less than 60 seconds to heat up. “Watt-for-watt, it’s not terribly expensive versus other IR options,” says Fricks. “IR is more expensive than a convection oven, but it offers speed and efficiency, as well as the ability to provide very uniform temperature — that is, variation less than plus or minus 5 degrees.”

Black IR could potentially be used in the production of fibers, prepregs, composite tapes and possibly chemical vapor deposition (CVD) processes like those use to make graphene and other nanocomposite materials. Fricks is seeking discussions with manufacturers and material suppliers to explore and develop further applications in composites.

The other technology that Heraeus Noblelight exhibited at CAMX 2018 was its humm3 system for automated fiber placement (AFP) of thermoset prepreg, dry fiber and thermoplastic composite tapes. The humm3 system uses a xenon-filled flashlamp that is pulsed multiple times per second. In part 2 of my 2018 article on in-situ consolidation of thermoplastic composites, I described in Fig. 2 how the lasers commonly used in thermoplastic AFP can be distinguished by their purple light vs. the orange light of the infrared (IR) heaters typically used in thermoset prepreg AFP. Notice that the humm3 technology is differentiated from both of these by its bright white light.

“Infrared lamps are relatively inexpensive, but they are slow and cannot reach the high temperatures required by aerospace thermoplastics,” says Kyle Hudspeth, sales manager for Heraeus Noblelight’s humm3 system in North and South America. “On the other side, lasers are very fast to heat and cool, but they are expensive and require significant safety precautions. Humm3 fills a gap in the market for fast, safe, compact and cost-effective heating for AFP.” 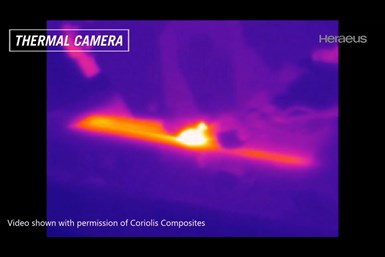 Hudspeth explains that humm3 delivers uniform heat to the AFP nip point over a wide range of temperatures, from as low as 50°C to the currently measured maximum of 600°C. It can also be precisely controlled using three programmable parameters: 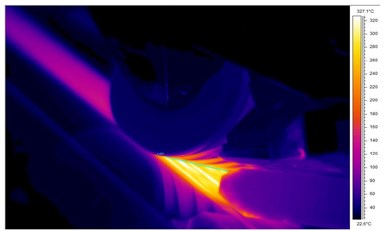 Thermal image of PEEK lay-up on a robotic AFP machine. The humm3 quartz delivery optic is seen at the right, pointing at the nip point between the substrate and incoming material. Speeds of 6 meters per minute were achieved with good quality results.
SOURCE | Heraeus Noblelight

He adds that the heating time and temperature is roughly the same as with a laser, “but no protective laser booth is required, so technicians can be close to the layup during operation.”

In tests for processing carbon fiber-reinforced polyetheretherketone (PEEK) laminates, Heraeus Noblelight demonstrated that humm3 can produce high-quality thermoplastic AFP laminates with the ≈35% crystallinity and <2% porosity required for aerospace composite structures.  As part of the EU’s Clean Sky 2 program, the Center for Lightweight Production Technology (ZLP, Stade, Germany) is working with Heraeus Noblelight to develop humm3 in the multi-robot GroFi system at the German Aerospace Center (DLR) in Stade. The work is aimed to significantly increase AFP rates for thermoplastic composite structures while meeting stringent quality requirements.

For dry fiber laminates that will be processed using resin infusion or resin transfer molding (RTM), Hudspeth claims humm3 enables a layup speed of 1 meter per second and uniform heating across eight or 16 tapes, each 0.25 inch wide.  Heating across a width of 300 millimeters can be achieved with a single lamp and coordinated with the humm3’s modular power supply and modular design to further tailor an AFP system for even larger heated zones. The humm3 quartz delivery optic is also customizable to achieve a precise heat zone shape.

The humm3 system is being developed for other composites processing, including thermoplastic welding, filament winding and tacking of multiple composite layers for preforms. Hudspeth notes humm3 is a mature, well-proven technology, demonstrated at the National Composites Centre (Bristol, UK) since 2016 and winner of the Queen’s Award for Innovation in the UK in 2015.