For years, composites fabricator Advanced Composites Products & Technology Inc. (ACPT, Huntington Beach, Calif., U.S.) has worked diligently to develop and perfect its design for carbon fiber composite driveshafts — carbon fiber composite or metal tubes connecting the front and rear parts of the drivetrain underneath most vehicles. Though first used in the automotive sector, these versatile components are also widely used for marine, commercial, wind, defense, aerospace and industrial applications, and ACPT has seen the demand for carbon fiber composite driveshafts grow steadily over the years. As demand has continued to increase, ACPT recognized a need to manufacture larger quantities of driveshafts — hundreds of the same shaft per week — with greater manufacturing efficiency, leading to new innovations in automation, and ultimately a new facility.

The reason for increased driveshaft demand, ACPT says, is due to carbon fiber driveshafts’ unique blend of capabilities compared to their metallic counterparts, such as higher torque capacity, higher RPM capability, better reliability, lighter weight, increased safety due to an inclination to break down into relatively harmless carbon fibers upon high impact and reduced noise, vibration and harshness (NVH).

In addition, compared to conventional steel driveshafts, carbon fiber driveshafts in cars and trucks are reported to increase a vehicle’s rear-wheel horsepower by more than 5%, due primarily to the composite having a lighter rotational mass. A lightweight carbon fiber driveshaft absorbs more shock and has a higher torque capacity than steel, allowing more engine power to be transferred to the wheels without the tires spinning out or separating from the pavement.

For years, ACPT has produced its carbon fiber composite drive shafts via filament winding at its California facility. To scale up to the required levels would required increasing facility size, improving production equipment and streamlining process control and quality inspection by shifting responsibility as much as possible from human technicians to an automated process. To achieve these goals, ACPT decided to build a second production facility, and to equip it with higher levels of automation.

ACPT works with customers in the automotive, defense, marine and industrial industries to engineer driveshaft designs specific to their needs.

ACPT located this new production facility in Schofield, Wis., U.S., to minimize disruption in driveshaft production during the 1.5-year process of designing, building, procuring and installing the new plant and production equipment, with 10 months dedicated to construction, delivery and installation of an automated filament winding system.

Each step of the process for producing a composite driveshaft was evaluated for automation: filament winding, resin content and wetout control, oven cure (including time and temperature controls), part extraction from the mandrel and handling of mandrels to and from each step of the process. An overhead or floor-mounted gantry automation system, however, was rejected as an option, both for budgetary reasons and ACPT’s need for a less permanent, moveable system to allow for limited-quantity R&D trials when necessary.

An illustration of the automated filament winding process that Roth developed for ACPT.

ACPT says one of the main advantages and requirements of the Roth filament winding system, which is designed to allow two spindles to simultaneously produce parts, was its proven automation capabilities. This was especially important given that ACPT’s proprietary driveshafts require multiple material changes. To automate manual cutting, stringing and reattaching of different fibers for each material change, Roth’s roving cut and attach (RCA) feature enables the winding machine to automatically change materials with its multiple manufacturing carriages. The Roth resin bath and fiber tensioning techniques also provided the ability to ensure precise fiber to resin wetout ratios without oversaturation, enabling the winding machine to operate faster than conventional winders without excess resin waste. Once winding is complete, the winder automatically disconnects the mandrel and part from the winding machine. 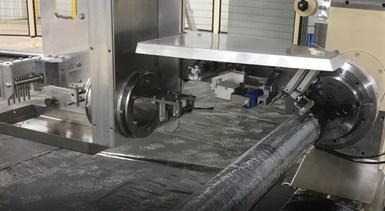 The winding system itself is automated, but that still leaves a large portion of handling and movement of mandrels between each manufacturing step, each of which was previously done manually. This includes preparing bare mandrels and attaching them to the winder, moving mandrels with wound parts to the oven for cure, moving mandrels with cured parts and extracting parts from the mandrel. As a solution, Globe Machine Manufacturing Co. developed a process involving a family of carts designed to accommodate mandrels that sit on the cart. A rotation system within the cart serves to position the mandrels for transfer in and out of the winder and extractor and to rotate continuously while parts are wet with resin and during oven cure.

These mandrel carts move from station to station, aided by two sets of floor-mounted transfer arms — one set at the winder and one set at an integrated extractor system — that coordinate motion with the mandrel carts, and pick-and-place mandrels for each process. Custom chucks on the carts automatically clamp and release the mandrels, which coordinate with the automated chucks on the Roth machine. 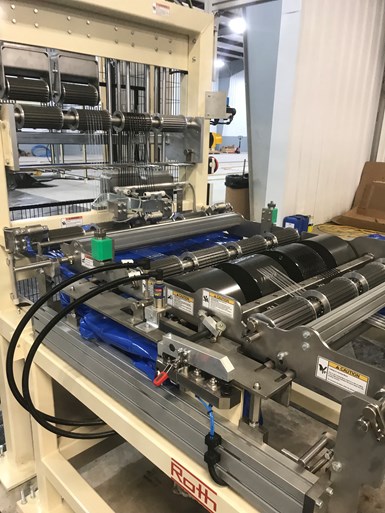 Along with this mandrel transfer system, Globe also provided two curing ovens. After cure and mandrel extraction, parts are transferred to a precision-length cutter and then a CNC system for machining of tube ends, followed by cleaning and application of adhesive with pressed fitting attachments. Torque tests, quality assurance and product tracking are completed prior to packing and shipping for the end-use customer.

One important aspect of the process, according to ACPT, is that it is able to track and log data such as facility temperatures, humidity levels, fiber tensions, fiber speeds and resin temperatures for each winding set. The information is stored for use in product quality inspection systems or production tracking and can enable the operator to make adjustments to the production conditions if necessary.

The overall process developed by Globe is described as “semi-automated” because human operators are still needed to press buttons to initiate process sequences, and to manually move the carts into and out of the ovens. According to ACPT, Globe envisions an even higher degree of automation for this system in the future.

After the first year of production at the new facility, ACPT reports that the equipment has successfully demonstrated the ability to meet its volume goals while providing labor and material savings and a consistently high-quality product. The company hopes to work with Globe and Roth again for future automation projects.