Julia Attwood, head of advanced materails a Bloomber NEF, delivered the opening keynote at IACMI’s winter meeting, addressing the role of carbon fiber in energy and transportation in the coming years with regard to capacity, pricing and demand.  CW photo | Scott Francis

The Institute for Advanced Composites Manufacturing Innovation (IACMI, Knoxville, Tenn., U.S.), held its winter membership meeting in Dayton, Ohio, U.S. January 21-23 and provided an update on activities of the public-private US Department of Energy consortium, which works to accelerate material and processing technologies for composites manufacturing.

The meeting celebrated IACMI’s past successes and looked ahead to the institute’s future, encouraging collaboration between federal and state governments, research institutes and private partners. A particular focus was on Ohio, which is home to more than 20 IACMI members. Ohio Lt. Gov. Jon A. Husted addressed the importance of technology to the state of Ohio, emphasizing a need for collaboration and workforce development — a theme that ran through much of the event. 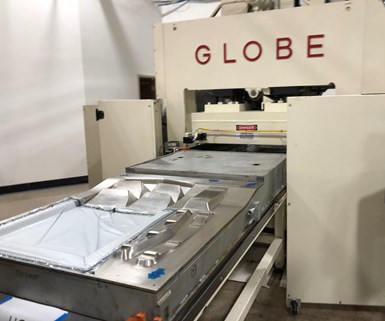 IACMI’s event kicked off with a tour of the University of Dayton Research Institute’s (UDRI) Dayton Composites Center (Kettering, Ohio, U.S.), which is located in the building that previously served as the National Composites Center. UDRI along with its industry partners demonstrated several of the center’s capabilities including tailored fiber placement (TFP) using Tajima (Tokyo, Japan) and  ZSK Stickmaschinen GmbH (ZSK, Krefeld, Germany) TFP equipment and a next-gen Rapidclave from Globe Machine Manufacturing Co. (Tacoma, Wash., U.S.). Daniel Allman director, composites business development for Globe Machine demonstrated operation of the Rapidclave with snap cure prepregs on an automotive hood mold and teased the forthcoming installment of a second, aerospace-centric machine.

The winter meeting’s opening keynote was delivered by Julia Attwood, head of advanced materials at Bloomberg NEF, who discussed the growing role of carbon fiber in energy and transportation. Attwood anticipates carbon fiber prices will halve by 2030 and production will double by 2025 driven by an increase in demand driven by the growing wind energy and electric vehicle (EV) markets. 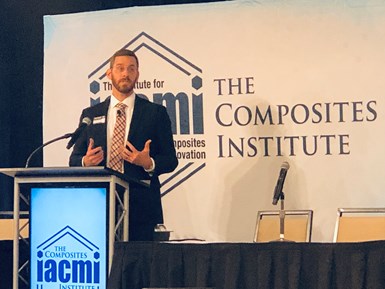 Michael Guckes, chief economist for Gardner Business Intelligence, delivered the second day keynote, offering economic insights into the state of the composite industry today. Guckes discussed the relative health of the aerospace industry in spite of the difficulties surrounding Boeing’s 737 Max crisis and encourages supplier and fabricators to think wholistically about their capabilities, watching the markets for new opportunities in growth sectors such as consumer electronics. 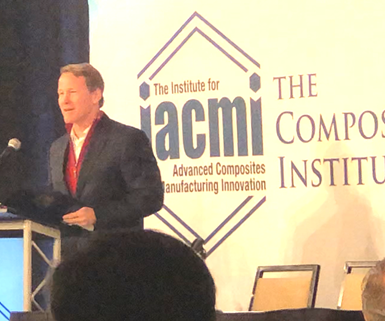 Ohio Lt. Gov. Jon A. Husted offered a closing keynote, addressing the importance of technology to the state of Ohio, emphasizing a need for collaboration and workforce development — a theme that ran through much of the event.

Workforce development is a large focus for IACMI. The institute was recently awarded a $5 million grant over the course of the next three years to expand a composites training program begun by Davis Technical College (DTC; Kaysville, Utah, U.S.) to four additional locations across the U.S. (Learn more).