IACMI SMC Workshop: From What to Why 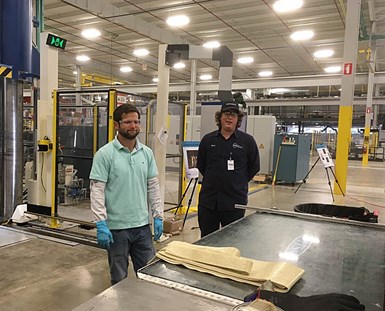 At the start of the class, Plaunt told a story from early in his career that illustrated why he wanted students to not just learn “the what” about SMC but also “the why,” and to ask questions if the latter wasn’t explained.  To that end, the first day of the course covered what SMC is, why it’s used, how it compares with other composites and metals, important markets and typical compositions — including what the various resins, fillers, reinforcements, initiators, internal mold release agents, pigments, chemical thickeners, inhibitors, viscosity reducers and monomers contribute.  The topic then shifted to looking at first-through-fourth-generation technologies used to control shrinkage, and the opportunities and challenges of adding reinforcements. The day ended with a discussion of the complexity of SMC compounding. On the second day, the compression molding process (along with several process variants) were described. Next, key aspects of tool design, the importance of practicing good manufacturing discipline, layup techniques, curing and demolding, and secondary operations were covered.

The class then moved downstairs to observe an outer/Class A SMC liftgate panel being molded, including the time parts spent in a cooling/check fixture between molding cycles.

After a quick tour of the equipment available for members and outside parties to use, the class moved back upstairs, where it was split into small teams that were tested by having to identify SMC defects on molded parts that Plaunt has collected over his many decades in the industry.  To help with this exercise, students received a second workbook, this one covering defects (including good descriptions of what defects looks like and what causes them) followed by probable corrective actions in order of importance. That document alone was worth the cost of admission. After “graduation” from the workshop, each attendee was presented with a USB drive containing that SMC troubleshooting guide to share with colleagues.

Interestingly, attendees represented a cross-section of the composites supply chain and had a broad range of composites experience. There were toolmakers, press manufacturers, fiber suppliers, materials suppliers and molders present. There were design engineers with a background in metals wanting to learn about composites; there were tooling and process engineers who had previously worked with composite prepreg and wanted to learn more about SMC; and there was an application development engineer whose company was thinking about adding SMC to the thermoplastic composites it already molded. There also were representatives from tier suppliers looking for molding partners, as well as those considering joining IACMI who wanted to see what the organization offered.

For the final exercise in the IACMI SMC workshop, the class was split into small teams and asked to identify common defects in SMC parts. About half the class is shown holding samples of parts Plaunt had collected over his many decades of experience in the industry. Even veteran industry members remarked that they learned something new in the class. CW photo | Peggy Malnati