The term “hydroelectric power” often brings to mind immense operations driven by purpose-built infrastructure such as dam systems and large turbines with traditionally metallic, propeller-based turbine blades. However, many areas are running out of new capacity for large, high-power hydroelectric power plants. At the same time, demand for more and lower-cost renewable energy generation continues to grow.

The U.S. Department of Energy (DOE), in its 2018 “Hydropower Vision” report outlining the current state of hydroelectric power in the United States and its goals for the future, predicted that growth in the U.S. hydroelectric market — from 101 gigawatts (GW) of energy capacity in 2018 to a potential capacity of nearly 150 GW in 2050 — would require new advanced technologies that can provide more energy at lower costs.

The company’s first technology is called the Hydro-kinetic Energy Generator (HEG) system, which measures 1.5 meters in diameter with an output of up to 30 kilowatts (kW) from﻿ water flows of 2.0 meters per second. This output makes it a “micro” hydropower system according to classification bodies such as the U.S. DOE, which defines micro systems as those with up to 100 kW of capacity. Intended for direct use in rivers, irrigation canals or tail races channeling water from existing dams, the HEG is designed for low-head hydropower — meaning the “head,” or distance between the water line and the turbine, is less than 20 meters. 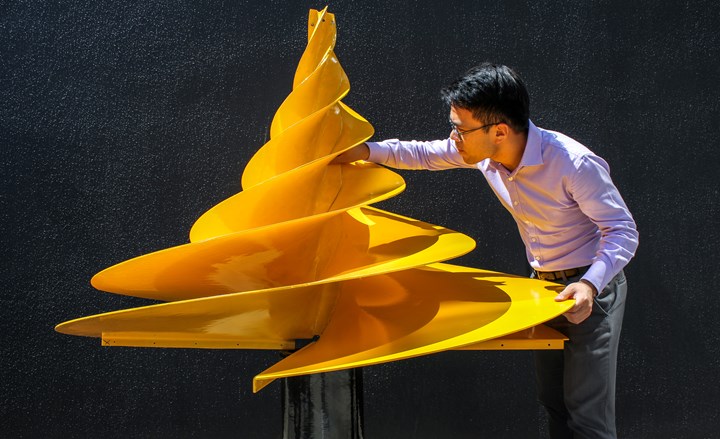 A first look at next-generation renewable energy. Kinetic NRG set out to design a modular hydroelectric turbine able to capture more energy from water sources such as rivers and irrigation canals. The result is this spiral-shaped, glass fiber/epoxy turbine blade prototype. Photo credit, all images: ACS-A

The most significant thing about the HEG, though, isn’t its size or output, but the spiral-shaped design of its turbine blade. Spiral blades have been developed and used by others before, “but not to this level,” Wren says. Most hydroelectric turbines include propeller- or fan-shaped blades arranged radially around a center axis, and activate a rotor or other electricity-generating mechanism within the turbine when rotated by water that is channeled downward into the turbine. These turbines work best in “high-head” water systems, where the water drops over a longer distance, picking up speed and water pressure to enable higher energy output.

According to Wren, a spiral-shaped blade, also called a “full-capture” blade, combined with the nacelle “actually increases water pressure available for capture, extracting more energy than previously thought possible. Our founder, Paul, had these ideas about how we can accelerate water flow through the HEG and capture the increased energy from traditional river flows, and he developed this spiral blade shape based on previous research and a combination of many papers,” he adds.

Development of the HEG and its spiral turbine blade has been in the works for about five years, Wren says. “It’s been quite a journey. The design we have now came about literally through trial and error.”

Kinetic NRG’s first, small-scale spiral blade models were formed from metal, but when the time came to manufacture the full-scale, 1.5-meter-diameter prototype, “we actually found that we couldn’t make it,” Wren says. The concept was to start with a flat piece of metal and then to form or forge a set of spirals radiating out from the center. “We just couldn’t find a way to access certain points of the part to create the strength that we needed,” he explains. 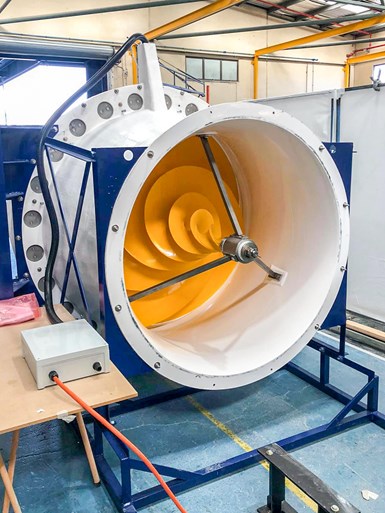 Modular installation. The HEG system can be installed via floating, fixed, or portable modular units, the goal being scalable, low-cost installation.

The company eventually abandoned its metallic efforts, but not the design itself. Wren says Kinetic NRG partnered with a local university to explore alternative manufacturing techniques and materials such as nylon or ceramics, and began talking with 3D printing companies to see if additive manufacturing could be a viable option. Still, no solution presented itself that provided the right combination of manufacturability and mechanical properties. Finally, after a three-year journey, Kinetic NRG was introduced through a supply network connection to the team at engineering company Advanced Composite Structures Australia (ACS-A, Melbourne), which specializes in design and manufacture of low-volume, high-value-added composite components for a variety of end markets.

Wren calls what happened next “a meeting of minds,” explaining that Kinetic NRG worked with Paul Falzon, general manager at ACS-A, and his team on various methods to manufacture and design the part using composite materials — materials that ACS-A knew from experience would be able to deliver the shape, weight and stiffness requirements Kinetic NRG needed.

The innovative blade shape was the key design challenge for the project, with mechanical requirements for the blade based, according to Wren, on standards set by the U.S. DOE and the International Electrotechnical Commission. The rest of the system’s components — transmission, power management, communication, etc. — are standard off-the-shelf products that are known to meet all necessary regulations.

According to Falzon, ACS-A first evaluated the metallic attempts at the blade design, and then determined how to achieve the required shape, dimensional tolerances and weight of the blade. The blade also needed to be able to withstand aquatic environments, and to be stiff enough to support the turbine’s steel shaft onto which it is attached. The ACS-A team started with the original metal design and “reverse engineered” a glass fiber composite blade to match the original stiffness, Falzon says. However, some design changes needed to be made when switching from a welded, metal-formed structure to a composite laminate. As Falzon explains, “We took a step back and asked, ‘Okay, if we’re going to take full advantage of composite materials, what does this thing look like?’”

After several iterations and discussions, the current design that took shape comprises four, identical composite blades that interlock to form the final spiral shape. “The composite blade is actually thicker than the steel design, but lighter because of the lower density of the materials we’re working with,” Falzon says. “Being thicker also means we get a lot more bending stiffness compared to the steel design, so you actually get a much stiffer product overall.” 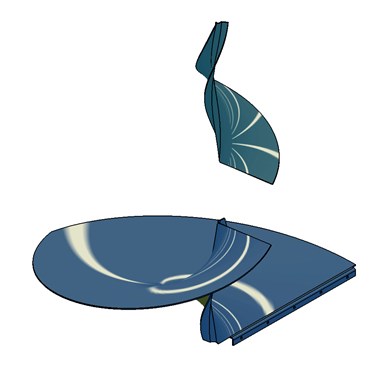 Designing the tooling. ACS-A says designing the tooling for the blade’s four interlocking subcomponents was the most challenging aspect of the design. CAD files show the upper and middle sections of the tool, which was manufactured by Sykes Australia.

Developing the shape for tooling, Falzon says, was the most challenging part of the process. The ACS-A team evaluated the original blade assembly’s shape using CATIA software from Dassault Systèmes (Waltham, Mass., U.S.). This led to development of the blade surfaces and design of tooling concepts.﻿ “When you look at the parts as they are today, they’re actually made in an upside-down orientation. The blade model had to be inverted to create the tooling, and it’s bizarre until you see the actual tooling when it arrives. It’s quite complex,” Falzon says. He explains that the tooling had to be inverted “to ensure we could achieve the required surface finish on the side of the blade exposed to the water flow,” and to ensure each of the manufactured blade components could be demolded in one piece. The tooling also had to be precise: the interlocking blade components had to be able to align exactly when assembled, with each other and with the turbine’s central shaft. For the prototype, the tooling, supplied by Sykes Australia (Sydney), was manufactured from low-cost tooling paste deposited onto a foam backing and then CNC machined to the final shape. 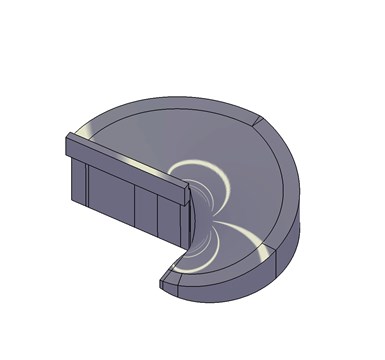 The lower section of the turbine blade tooling.

Once the tooling was developed, the current, full-scale prototype blade was constructed from glass fiber noncrimp fabric (NCF) and epoxy resin, manufactured via hand layup and cured at room temperature, followed by post cure in an oven at elevated temperature and application of a marine-grade paint. The materials were selected, Falzon notes, to meet both the structural and cost requirements for the part. The interlocking subcomponents are adhesively bonded — chosen over mechanical fastening for better control and dimensional accuracy in assembly. “The real trick,” he says, “is to make sure that the blades can interlock, but once we laminate it all and bond it together it forms a very rigid assembly that achieves the needed structural and hydrodynamic shape performance.”

Digital analysis of the structure’s stiffness and other mechanical properties was performed using tools from MSC Software (Newport Beach, Calif., U.S.).  “This system is much more efficient, lighter and able to do more work than the original design,” Falzon adds.

According to Wren, Kinetic NRG’s initial production target will be 950 units over a three-year period, and then scaling up from there to several thousand per year. Potential customers, Wren says, may include private individuals and companies, power companies and municipalities — a wide range, underlining the versatility of the HEG concept. The systems can be installed as “mini hydropower plants” within irrigation canals, or placed downstream from existing hydroelectric generators to generate power from under-utilized off-flow, or as supplemental power for remote communities or businesses, he says.

ACS-A expects to continue fine-tuning the blade design, as needed, depending on the mechanical testing results and requirements for the most cost-effective manufacture possible. Specifically, Falzon says ACS-A is exploring automated preforming processes “so we can get the shape right with minimal hand labor,” followed by light resin transfer molding (L-RTM) or another higher-speed process.

Finishing touches. The blade is finished with an anticorrosive, marine-grade paint before installation with the rest of the turbine.

Methods for turbine assembly are also under evaluation, the goal being, Wren says, for the blade subcomponents to be produced modularly and assembled locally, to avoid the costs and challenges in shipping entire full-scale units while creating local employment opportunities and lowering installation costs. To make this possible, ACS-A may need to modify the way the blades interlock and the number of subcomponents in each assembly, as well. “We’ll still have the full blades in their original shape, that’ll still be a key part of it,” Wren says, “but we may change where the transitions occur in order to make the same shape in fewer components for easier onsite assembly.”

The two companies also are evaluating conversion of metallic components of the turbine into composites, to cut down on weight of the overall assembly. “We’ll use glass where appropriate and carbon fiber where it’s appropriate, but ultimately, we need to achieve a price point for the technology in order to make the cost of energy generation for the system cost-competitive,” Falzon says.