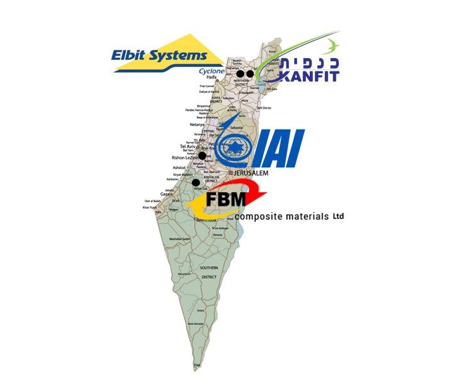 CW was invited to tour the production facilities of composites manufacturers on the cutting edge of the composites end of Israel’s hotbed of high-technology activities. Four facilities were ultimately selected for visits: Israel Aerospace Industries (Lod) and subcontractor FBM (Kiryat Gat) in the south, and in the north, high-growth Kanfit (Migdal HaEmek) and Elbit-Cyclone (Karmiel).

As CW’s editors developed this Plant Tour Supplement for the July 2018 issue of CompositesWorld, it quickly became clear that half of its tours would profile composites manufacturers from the state of Israel. Why half? For one, Israel, in its short history, has become an economic powerhouse, and two, it has become a hotbed of cutting-edge technology. And composites are on the cutting edge.

Israelis are proud of their country and their expanding high-tech industry prowess. Roughly the size of New Jersey, Israel has become a world leader in digital technology, and Israeli firms have been the beneficiaries of one-fifth of the world’s private investment in cyber security. Dubbed “Startup Nation,” Israel has recorded more startups and venture capital transactions per capita than any other country. In fact, there are more than 300 international firms with high-tech research centers in Israel, including Microsoft, IBM, Apple, Cisco and HP.

When CW was invited to tour the composites end of Israel’s high-tech movement by Industry 4.0/industrial Internet of things (IIoT) specialist Plataine (Waltham, MA, US), which has its R&D center in Israel, CW had already explored that sector to a degree in several articles about Plataine and its customers over the past few years. So, CW’s editorial team agreed it was a tour worth taking. Ultimately, four facilities were visited: Israel Aerospace Industries (Lod) and subcontractor FBM (Kiryat Gat) in the south, and in the north, high-growth Kanfit (Migdal HaEmek) and Elbit Cyclone (Karmiel).

Spectrum of size and personality

Although two of the companies are quite large — IAI has 15,000 employees and Elbit has 12,500 — their composites operations employ hundreds. That puts those operations closer to parity with those of Kanfit and Elbit, which field 188 and 140 employees, respectively. However, the personalities of the companies are quite different. IAI, the largest and oldest, is a pillar in Israel’s defense industry and a global defense technology leader with a corresponding security culture that makes access to details difficult. Yet it has participated in more than 86 EU-funded, pan-European R&D projects (many composites-focused), has invested heavily in R&D, and has more than a decade of experience building primary structures using resin infusion and resin transfer molding (RTM).

FBM is almost an opposite — small, very open and, of the four, the most recently established, having been added to The Boeing Co.’s (Chicago, IL, US) Qualified Processor List (QPL) in 2012.

Kanfit, also small, is growing quickly, preparing for a second autoclave and its next expansion. In addition to its aerospace production expertise, it has established a competency for innovative medical device solutions that rely on composites, but also extreme accuracy, often enabled by RTM. Like IAI, it sees opportunity with RTM and moving parts out of the autoclave.

The subsidiary of a large global defense company, Elbit Cyclone can match IAI’s long history and worldwide presence in aerospace production, both in Israel and worldwide. Yet its lean workforce, flexibility and composites growth are reminiscent of a start-up. It, too, has developed RTM expertise through its integrated, fastener-free technology for all-composite aircraft doors and control surfaces. However, like Kanfit, it also is investing in technologies like 3D printing to support its design and production capabilities for advanced metal-composite assemblies.

The four companies use both metals and composites, but in each case, composites are a growing technology. Although all possess liquid molding capability, their composites manufacturing operations are mostly build-to-print, using hand layup, autoclave-cured prepreg. As Elbit Cyclone’s senior manager for business development and marketing, Jonathan Hulaty, quipped, “that may not sound so glorious,” but it is the engine that powers the aerospace composites industry.

In fact, for CW, it was instructive to see, first hand, the materials and methods used to produce and ship worldwide thousands of composite parts, with high reliability and repeatability, to meet increasingly higher monthly production rates, aided by the latest in automated cutting, kitting, forming, preforming molding and curing equipment.

The composites industry in Israel, of course, includes other fabricators and suppliers that CW did not tour. But the impression is that although the number of overall players is small, their diversity, innovation and capability has positioned Israel well for growth.