More attention is being focused on fabricating processes for aircraft structures that can save time and money and improve efficiency while yielding high-quality parts. Historically, nearly all aircraft designers have assumed autoclave cure as the norm, despite the well-documented cost and time advantages of
#outofautoclave #autoclave 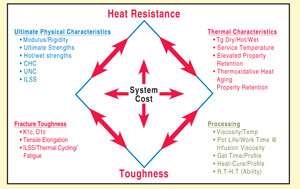 More attention is being focused on fabricating processes for aircraft structures that can save time and money and improve efficiency while yielding high-quality parts. Historically, nearly all aircraft designers have assumed autoclave cure as the norm, despite the well-documented cost and time advantages of out-of-autoclave processing. The formulation of epoxy-based resin systems that can be used to vacuum infuse dry fibers or preforms holds great promise for producing large, complex composite parts with less than 1 percent void content and controllable resin/fiber ratio. Vacuum infusion permits the use of inexpensive “soft” tooling and ambient/near-ambient curing to reduce autoclave processing costs and save energy.

A key to formulating one- and two-part epoxy resin systems for aerospace vacuum infusion is balancing viscosity with in-service performance. Huntsman Advanced Materials (The Woodlands, Texas), a pioneer with its trademarked RenInfusion epoxies for infusion processes, has found that through the use of nano-based toughening agents, new-generation infusion epoxies can be produced with physical property combinations that once were apparently diametrically opposed. For example, epoxy formulations have been developed that can be infused at temperatures less than 120ºF (49ºC) for two-part systems, and 180ºF (83ºC) for one-part systems, says Huntsman senior chemist Jim Hoge, delivering adequate pot life, a high glass transition temperature (Tg), and good toughness with high modulus. System dry Tg’s are in the 280ºF to 350ºF (138ºC to 177ºC) range.

To develop new infusion epoxies, Huntsman began by preparing a list of optimal handling properties. The ideal viscosity for infusion of structural aircraft parts was determined to be less than 500 centipoise (cps) at room temperature if possible. A minimum working life of 1.5 hrs at infusion temperature/viscosity was selected to accommodate the infusion of large parts. Starting with existing one-part and two-part RenInfusion epoxy systems, the objective was to obtain fracture toughness values of more than 0.9 MPa with tensile modulus greater than 3,100 MPa.

Neat resin samples also were tested to determine the ability of the new-generation, nano-enhanced epoxy infusion systems to resist moisture absorption and thereby maintain good properties in a hot-wet environment. The goal was to maintain a neat Tg of at least 130ºC (266ºF) after conditioning samples for 14 days at 71ºC (160ºF). Cured neat epoxy samples also were studied after heat aging in an oven for 200 hours at 149°C (300°F) and 400 hours at 177°C (350°F) to determine the effect of various nano-tougheners, liquid rubbers, and reactive plasticizers on the thermooxidative resistance of one- and two-part candidate systems.

As expected, two-part epoxy/anhydride systems maintained the highest Tg after heat aging in the 350°F heat age range. These systems do, however, have several disadvantages compared to epoxy/amine two-part systems, including the need for more time and higher temperature for initial setup, initial cure, and full postcure property build. Poor moisture resistance and brittleness also can develop.

Further study is underway, including development of correlations between neat and infused composite properties, e.g., the wetting ability and the bond strength between the epoxy matrix and the fiber. Says Hoge: “Our work demonstrates that processing characteristics can be improved with minimal sacrifice to mechanical properties and with added toughening effects. The goal is to produce systems with equal or improved mechanical performance, laminate quality, and damage tolerance in comparison to the current autoclave processed systems for aerospace.” Hot/wet properties, thermal oxidative properties, and toughness relating to microcrack prevention during thermal cycling are being enhanced.