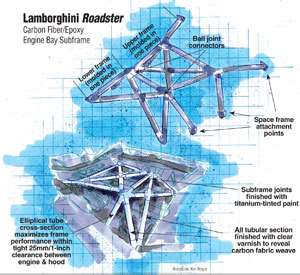 When legendary automaker Automobili Lamborghini SpA (Sant’Agata Bolognese, Italy) designed a roadster version of its Murciélago Coupé, a significant engineering challenge was posed by the removal of the supercar’s roof to create the open cockpit. That change, alone, reduced the vehicle’s torsional rigidity by 50 percent or more, leading to concurrent loss of handling “crispness” and road “feel.” Like the Coupé, the Roadster has a nearly all-composite body — exceptions are the gull-wing doors and the pillar structure — over a tubular steel space frame chassis. To compensate for removal of the Coupé roof, the Roadster was significantly redesigned to add back in the lost torsional stiffness below the beltline. New structural members were added and critical components were stiffened. Carbon fiber-reinforced polymers were used to enhance structural components in the lower integrated chassis substructures, including the transmission tunnel, floor pans, wheel well panels and doorsill stiffeners. But the most important modification was the addition of a complex subframe that forms a cage over the car’s rear-mounted engine, spanning the engine bay. This component helps prevent buckling and twisting during severe impacts by stiffening the vehicle’s space frame and resisting cyclic loading from rear suspension attachments. It also is removable to permit engine service.

Initially, a multipiece, welded-steel tubular assembly similar to the vehicle’s space frame was created. With this subframe in place, the Roadster more closely approximated the structural performance of the Coupé without adding significantly to vehicle weight. However, Attilio Masini, team leader of the Advanced Composites R&D Div. at Lamborghini, says the automaker decided to offer customers a composite version of the subframe as an option. Like the metal subframe, it had to fit into a small space (because engine mounting points could not be moved) and withstand engine temperatures that can reach 116°C/241°F. Clearly visible when viewing the engine, the composite frame also needed aesthetic appeal.

Carbon/epoxy was selected for the part because of its low density and fiber-dominated axial mechanical properties. Composite design flexibility was equally important — both for aesthetics and to achieve maximum design freedom within the narrow packaging space available. “For cosmetic and weight-saving reasons,” says Masini, “Lamborghini decided to invest in a more technological solution — one that would offer our customers the right performance but with a boost toward innovation. The composite solution was the key.”

Re-engineering the steel subframe in composites

The first-generation composite structure was produced by hand layup of prepreg tape over an aluminum male mandrel, followed by vacuum bagging and autoclave cure. Here, 1.0m (3.1-ft) carbon/epoxy tubes were formed and then cut into 17 struts, with lengths ranging from 100 mm to 350 mm (3.93 inches to 13.8 inches). Strut cross-sections were changed from a circular shape used on the steel tubes, to an elliptical shape, a configuration that achieves the highest moment of inertia per fixed vertical dimension. Cross-sectional axes measured 39 mm by 25 mm (1.5 inch by 0.9 inch). Complex joint components of the same material were used to connect two or four struts, depending on design. Fabricated separately, the joints were layed up as two half shells in individual monolithic epoxy female tools, partially cured and then domolded, assembled with a film adhesive and cocured.

Although the 3.4-mm/0.13-inch composite tube wallstock was roughly twice as thick as the metal benchmark (1.5 mm/0.06 inch), the composite subframe was significantly lighter (6.85 kg/15.1 lb vs. 14.9 kg/ 32.8 lb) and fit within the 25-mm (1.0-inch) clearance available between the outermost engine surface and the lowest point on the hood. To achieve a Class A finish, the struts were varnished with glossy, transparent urethane to highlight the fabric weave, and joints were sprayed with opaque titanium-tinted urethane paint. Although the subframe produced by this male-mandrel process met stiffness and aesthetic requirements and weighed less than the steel design, layup and bonding operations were slow, and the need for extensive postmold finishing led to unacceptably high production costs — seven times greater than the cost of the standard metal frame.

To improve productivity, a second trial was performed in which the struts were made by tube rolling (roll wrapping) — a technique borrowed from carbon fiber golf shaft production. Individual plies were rolled over an aluminum male mandrel and then wrapped with thermal shrink tape for compaction and oven-cured. Joints were made as previously described. Although this process was faster and more economical, the additional postmold sanding required to remove the shrink tape imprint prior to varnishing tended to expose and damage fibers. The process also resulted in nonuniform laminate thicknesses (±0.4 mm/±0.016 inch), causing bond-line clearance problems at the tapered joints and poor fit between struts and joints. Moreover, this subframe still cost four times more than the metal version.

In the third iteration, a bladder-molding process (often used to manufacture carbon fiber bicycle frames) permitted the frame to be produced as two large, single-piece components, which integrated formerly separate tubes and joints structures, reducing part count and eliminating several assembly steps. In this case, plies for each component were arranged in female, matched aluminum tools. A nylon bladder was laid into the bottom half of the mold, the mold was closed and the bladder was inflated to consolidate the laminate. Components were oven cured rather than autoclaved.

Bladder molding offered compelling improvements over the earlier options. Unlike roll wrapping, the exterior of the part faced the tool surface, so the post-mold finish was nearly Class A. Further, the bladder provided uniform pressure, so parts had constant wall thickness across their length.

The two sections were connected via universal ball joints, which were comolded with the laminate. This not only eliminated costly and time-consuming adhesive bonding but also improved structural integrity. Additionally, total subframe weight decreased to 5.2 kg/11.5 lb, compared to 14.9 kg/32.8 lb for the metal subframe.

A fourth iteration — a variation on the bladder-molding method — pulled together lessons learned in previous iterations and was chosen for final production. Plies were wrapped around a partially inflated silicone (rather than nylon) bladder and then enclosed in the female mold. This modification simplified layup and improved part quality by making it easier to control fiber orientation. The bladder-molding option, thus modified, brought the cost down to about twice that of the metal subframe, an increase easily justified by the performance-to-weight gains. The striking clear strut/titanium joint color scheme in the original iteration was retained.

As the manufacturing processes were being evaluated, ply schedules also were compared for mechanical performance. This was necessary because the sub-frame layup must not only take full advantage of the tensile and compressive properties of the carbon fibers but also must resist torsional and bending stresses. Conventional beam theory suggested that tubes designed for both bending and torsion should be built with an outer stack of 0° plies for highest axial stiffness, followed by a stack of ±45° plies (the torque core) to supply torsional rigidity. However, Lamborghini’s research demonstrated that, in this configuration, the surface 0° plies are prone to delamination and crack initiation/propagation.

To avoid these defects, the initial sequence for the subframe was a balanced and symmetrical laminate comprising two 0°/90° fabric outer plies and one ±45° plain-weave fabric ply, followed by seven 0° unidirectional plies, a ±45° and two more 0°/90° on the inside. Its performance was compared against an asymmetrical sequence formed by removing the two 0°/90° fabric plies on the inside and substituting in their place uni tapes (two 0°, followed by one +45° and one -45°), a configuration investigators thought would provide better torsional and bending performance. Both laminate configurations were trialed using each of the three molding processes and then performance tested. Testing, performed primarily by Dr. Paolo Feraboli, assistant professor of the Aeronautics & Astronautics Dept., University of Washington (Seattle, Wash.), revealed that the practice of grouping multiple plies of the same orientation should be avoided because it provides little resistance to crack propagation, especially in resin-rich areas. Further, it was determined that adjacent plies should not be stacked with high fiber-orientation mismatch because the [0i/±45j] ply interface forms a weak interlaminar plane, so some of the angle plies were interspersed with the axial plies. As a result, the initial stacking sequence of [(0/90)²/(±45)/07/ (±45)/(0/90)²] was replaced by [(0/90)²/0²/(±45)/0²/(±45)/0²/(±45)/(0/90)].

“In its current configuration, the outer fabric plies not only provide a pleasing aesthetic effect but also represent the more damage-resistant design,” explains Feraboli.

Thanks to the subframe, the Roadster provides nearly the same torsional rigidity and handling available with the Coupé — no small engineering feat for a roofless vehicle. In fact, the subframe alone (in composite or steel) contributes ~50 percent of the torsional stiffness lost when the roof was removed. Lamborghini engineers were able to recoup another 30 percent via modifications to other CFRP structures in the vehicle. Compared to the standard metal subframe, the optional composite subframe reduces component weight by 60 percent (9 kg/19.8 lb) — a significant mass reduction on such a high-performance vehicle.

“Feedback has been extremely positive on the composite subframe,” says Andrea Bonfatti, manager of Lamborghini’s Technical R&D Div. “Fully 80 percent of our customers who purchase the Roadster version of the Murciélago are requesting this option, and we are proud of the technical achievements obtained with the subframe.”