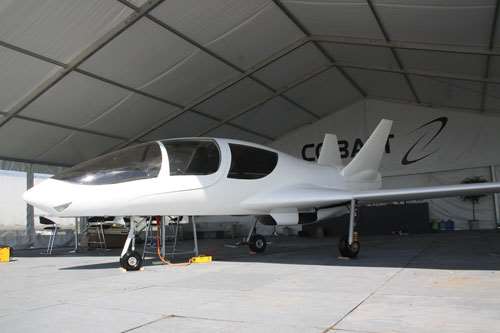 Despite heavy rains early on — some wags dubbed the event “Galoshkosh” — the Experimental Aircraft Assn.’s (EAA) AirVenture show, held July 25-Aug. 1 in Oshkosh, Wis., still attracted 535,000 visitors. That total was about 7 percent less than 2009, as expected by organizers, but EAA president Tom Poberezny says exhibitor numbers and participants’ spirits were flying high. “This year’s weather challenges had an effect,” he noted, “but the second half of the week was outstanding.”

Aviation and aerospace news abounded. Especially notable was a new, all-composite aircraft from Cobalt Aircraft Industries (Toussus-le-Noble, France). Unveiled at a press conference on Wed-nesday, July 28, the five-seat Co50 features a front canard wing and will be propelled by a 350-hp twin-turbocharged Continental in a pusher configuration, said company CEO David Loury. With a projected maximum cruise speed of 245 KTAS (282 mph), the new plane will be a fast, high-performance piston prop plane similar to a Cessna 400 or a Cirrus SR22.

“We are planning to fly the prototype before the end of the year,” Loury reported, adding that Cobalt is targeting certification in two years, but he acknowledged that the process could take three or four.

Noting that 90 percent of sales leads for the $650,000 (USD) aircraft are, so far, from the U.S., Loury says Cobalt is setting up a U.S. office in San Francisco, Calif., and by early 2011, it will select a U.S. manufacturing site to support dual U.S./France production.

Terrafugia (Woburn, Mass.), meanwhile, unveiled its next-generation Transition flying car on July 26, with the news that it expects the craft to fly publicly for the first time at next year’s AirVenture 2011. The new model is a more refined version of the twin-boom, folding-wing pusher the company originally designed in 2006, but it will fly with the same 100-hp Rotax engine. The original proof-of-concept vehicle, on display at the show, made 28 flights near the company’s headquarters before it was retired. Terrafugia CEO Carl Dietrich said the Transition will incorporate aircraft and automobile safety features and become “one of the safest light sport aircraft in the world.” The company obtained FAA permission for a 110-lb/50-kg weight increase from the normal light sport aircraft (LSA) limit of 1,320 lb/599 kg. The company hasn’t set a retail price for the redesigned Transition, although the original was more than $180,000. Company officials report 80 orders so far.

Another LSA manufacturer, ICON Aircraft (Los Angeles, Calif.), announced that it will outsource structural composite assemblies for its ICON A5 to Liberty Aerospace (Melbourne, Fla.) and Flytech Kft. (Szombathely, Hungary). The decision marks an important milestone on the way to production of the amphibious aircraft. It also illustrates ICON’s resolve to take advantage of existing capabilities in the certified aircraft sector rather than recreating them, said the company. This frees ICON engineers to focus solely on the remaining development of the production aircraft design (which will permit owners to trailer the plane like a boat) and control all final assembly, system integration and testing.

ICON also revealed that former Boeing CEO Phil Condit has joined its board of advisors, bringing with him more than 40 years of aviation experience. “There are few individuals with the breadth of experience, expertise and influence in our industry as Phil Condit, and we’re honored to have him,” said ICON founder/CEO Kirk Hawkins.

Honda Aircraft Co. Inc. (Greensboro, N.C.) released a program update at the show that highlighted achievement of two HondaJet program goals: power-on for the first conforming flight test and the successful consolidation of fuselage and wing assemblies for the first static-test aircraft, which will enter structural testing this month.

“The success of our power-on tests is an important step in the completion of the first conforming flight-test aircraft,” said Honda Aircraft president and CEO Michimasa Fujino. “With this significant milestone achieved, we are now focused on the integration of avionics and other electrical systems in anticipation of first flight later this year.”

Ongoing stress tests at Honda Aircraft’s R&D facility in Greensboro employ a new system that incorporates 61 hydraulic actuators and a 2,600-channel data acquisition system within a structural test fixture designed exclusively for the HondaJet. This system enables testing of the entire aircraft simultaneously to prove static and fatigue strength under various flight and ground load conditions. Honda’s test facility includes an environmental chamber that can simulate the hot-wet conditions required for the validation of composite structures. Since U.S. HondaJet sales commenced in October 2006, the company has accumulated orders for more than 100 of the $4.5 million planes, Honda’s first-ever production aircraft. The HondaJet is scheduled for first delivery in the third quarter of 2012.

Also on hand was the E430, a 54-hp, two-seat electric plane from Yuneec International of Potters Bar, U.K. Selected by the Symposium as this year’s Best Electric Aircraft, its development has been financed personally by Yuneec CEO Tian Yu and will be built in a recently finished 260,000-ft²/25,000m² factory near Shanghai, China. The craft’s all-composite airframe has a very low empty weight of 561 lb/171.5 kg, half of which is its battery pack. Its maximum take-off weight is not quite twice that figure. With a wingspan of 45.2 ft/13.8m, the 22.9-ft/7m long, V-tailed craft is capable of up to three hours of flight on a charge, and recharges in three hours for about $5 (USD). Reportedly already FAA-certified, the E430 will be available in the U.S. in the LSA category, at a mere $89,000.