Discriminating features of the 2019 Sierra Denali 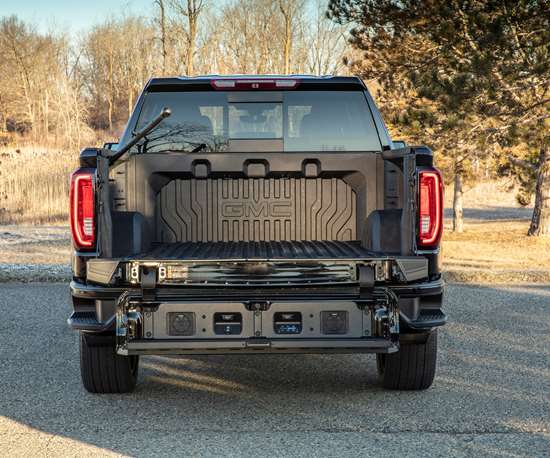 The 2019 Sierra Denali’s six-user option, MultiPro tailgate is another unique and customer-focused feature that enhances use of the storage area in the back of the vehicle. Among its features, with the touch of a button, a central “inner gate” releases and drops down below the rest of the tailgate (shown above), making it easier to reach into the box to place/remove objects.

As innovative as the CarbonPro pickup box is (see more about its design and development in “Chopped carbon fiber, polyamide and innovation redefine the modern pickup truck bed”), it’s certainly not the only game-changing feature on the GMC Sierra Denali pickups from General Motors Co. (Detroit, Mich. U.S.). While it shares aluminum doors, hood and standard tailgate with “sister” Chevrolet Silverado models, visually the GMC models differ from Chevrolet counterparts through the use of asymmetrically-shaped wheel arches, distinctive sickle-shaped LED running lights, a “fanged” front grille and a more luxurious (but still durable) interior featuring leather-appointed seating with contrast stitching, and trim using real wood and aluminum accents.

Both models are taller than their predecessors, with wider beds, more cargo space (1.8 cubic meters), an extra 7.5 centimeters of rear-seat legroom and rear seats that fold forward to reveal hidden storage space. High-end trim levels for both 2019 Silverado and Sierra pickups are powered by a 3-liter/6-cylinder diesel engine or a 5.3- or 6.2-liter V8 gasoline engine. The gasoline engines feature Dynamic Fuel Management, a feature allowing between one and seven cylinders to be shut off to boost fuel economy while the vehicle is running. The diesel and 6.2-liter gasoline engines are mated to 10-speed automatic transmissions developed in partnership with Ford Motor Co. (Dearborn, Mich., U.S.). Blind-spot warning systems, pedestrian detection and automatic braking at low speeds are additional safety features common to Silverado and Sierra platforms. However, a host of additional safety and convenience features are where the two platforms really start to diverge.

The Sierras reportedly sport the auto industry’s first 38-centimeter diagonal multicolor heads-up display, which is customizable and configurable, so drivers can keep tabs of what’s going on without their eyes leaving the road. Parameters like a compass, fuel efficiency and vehicle speed are just the beginning. The display also shows turn-by-turn directions from the GPS system, incoming calls and more. A rear-facing camera (that removes the vehicle’s pillars from the viewing area) is mounted to the top back of the cab where it feeds ultra-low latency/near-real-time video into the passenger display unit. With the special Pro-Grade Trailering System (and its helpful app), users are reminded of pre-departure checklists and maintenance steps. Easy-to-install cameras (which are part of the towing package) feed more video into the display area, make hitching safer, faster and easier, and allow a driver to see immediately behind the truck — a convenience that makes lane changes and backing up much safer. Additionally, sensors that monitor temperature of trailer tires can help a driver anticipate and avoid a possible blowout. Other high-tech features include wireless charging inside the cab and an adaptive ride-control suspension system.

Although it’s not made with composites, one of the most innovative features (available as an option for either Sierra SLT or Sierra Denali models) is the multi-function MultiPro tailgate. Essentially a split, folding tailgate with six user options, the MultiPro is operated by a touch pad rather than a conventional handle and provides new levels of pickup-box functionality. Touch the pad’s lower button and the tailgate smoothly and quietly releases (without human assistance) to a conventional horizontal position. Lift a small latch inside the gate and a “load stop” panel pops up to act like a short bed extender. Press the touch pad’s upper button and a central “inner gate” releases and drops below the rest of the tailgate. The cutout area makes it easier to reach into the box to place or remove objects. Push another button while the inner gate is down and it converts into a step (rated to 170 kilograms) that makes it easier to climb in and out of the rear of the bed. Still another clever feature integrally attached to the left rear side of the CarbonPro pickup box is a metal assist handle that pops up and locks in place to provide further step assistance for someone entering/leaving the truck bed. Pushing yet another button converts the tailgate to a standing-height work surface, where a user can review papers or access a tablet or laptop.

The CarbonPro box — the world’s first thermoplastic composite box and the world’s first carbon fiber-reinforced composite box — itself features two-tier loading, a molded-in GMC logo on the headboard inside the box and Denali badging on the exterior tailgate. Reportedly, design of its unique corrugated bed wasn’t restricted by radius and depth-of-draw limitations like traditional composite and metal boxes have been. Although it is orders of magnitude more durable than steel, aluminum and even previous SMC composite boxes based on GM’s own testing protocols, it’s been engineered to carry a comparable payload to that of the metallic box it replaces.