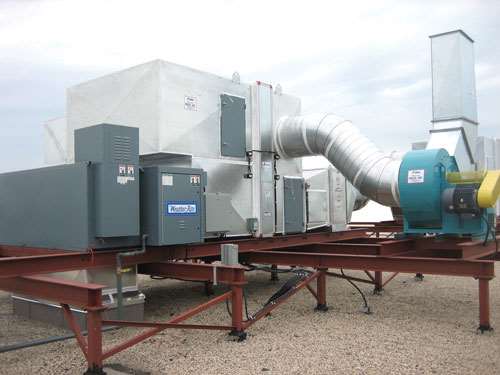 When open molder Structural Composite Technologies Ltd. (Winnipeg, Manitoba, Canada) prepared to move to a larger facility in 2007, the company discovered, to its surprise, that the provincial government had tightened air-quality limits for styrene to 20 ppm (parts per million) during an eight-hour day — more than 40 percent tighter than in the U.S. (50 ppm) and other parts of Canada.

The tougher limit prompted company president John Zadro to select a ventilation system from fiberglass industry ventilation specialist Frees Inc. (Shreveport, La.) after learning that, in general, HVAC systems depend on a dilution ventilation method that continuously pulls in large volumes of clean outdoor air, heats or cools it, then introduces it into the workspace at large (often from a single point) and exhausts it at a distant point, diluting the overall workplace styrene levels. Because styrenated air can “roll back” or impinge against building walls, recontaminating the workspace, these systems must work hard to achieve compliance. The Frees method, however, uses a proprietary directed airflow system. “Intelligent” digital controls (triggered by motion sensors, monitoring of resin flow or other methods that fit the customer’s process) detect styrene-producing activity and, via ductwork, focus air exchange in a controlled envelope. Fresh air moves across the workers’ breathing zone(s) as styrenated air is captured and drawn away from the local area(s), without rollback. When styrene-producing activity ceases, the system automatically cycles off or slows to minimum operating levels. The system also employs heat exchangers to recapture heat from the contaminated air, a real benefit during Manitoba winters.

In this case, the Frees system also accommodates two open grinding booths that cannot be completely enclosed because they require access by a bridge crane. Directed air blows over a part during grinding, capturing the dust before it can leave the booth.

An energy audit showed that the overall system has resulted in operational cost savings (between 30 and 60 percent) and workplace compliance. “This system handles only 40 to 60 percent as much air as a conventional ventilation system, so there’s less equipment and lower operating and maintenance costs,” says Zadro, “and our shop is regularly less than 20 ppm.”