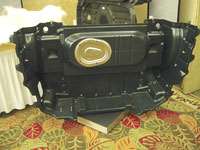 Source: Dale BrosiusThe rear tub on the Pontiac Solstice is produced in a preforming and press forming process developed by Molded Fiber Glass Companies. Preforms are manufactured in a robotic process known as "positive glass placement."

Source: Dale BrosiusThe rear tub on the Pontiac Solstice is produced in a preforming and press forming process developed by Molded Fiber Glass Companies. Preforms are manufactured in a robotic process known as "positive glass placement."

The 2006 North American International Auto Show, held January 14-22 at the Cobo Conference/Exhibition Center, in Detroit, Mich.), continued in its role as the premier forum for production and concept vehicle introductions from domestic and international OEMs. As in 2005, the show promoted both power and economy, with vehicles featured in each category. Concurrent with the event, the Automotive Composites Alliance (ACA) held a daylong reception at a venue adjacent to Cobo Hall. The event featured composite components and gave attendees a chance to learn more about the materials and methods used to produce them.

Composite exterior body panels have undergone significant improvements in recent years, notably in the area of defect reduction, using new toughened resins, such as Atryl TCA from AOC LLC (Collierville, Tenn.). "The experience we now have with tougher resin matrices and barrier coatings for Class A panels proves our ability to essentially eliminate paint pops," emphasizes Mike Dorney, VP of sales for ThyssenKrupp Budd Co. (Troy, Mich.). "This has restored SMC as a viable option for more vehicles than ever before."

New sheet molding compound (SMC) materials currently being promoted to the OEM community include a lower density Class A material. A reduction in specific gravity from 1.9 to 1.6 g/cc is achieved without the use of hollow glass microspheres, which tend to crush during compression molding, releasing gas that can migrate to the surface during paint baking operations. Instead, compounders use lower density fillers and resins, says Gary Landsettle, business director for Ashland Specialty Chemical Co.'s Composite Polymers business (Columbus, Ohio) and current ACA chairman. New vehicles with SMC body panels include the Cadillac XLR-V and Cadillac STS-V series; both incorporate styled composite hoods to accommodate larger engines. The Pontiac Solstice and forthcoming Saturn Sky roadsters have injection molded SMC "tulip" panels between the seats and the deck lid. The Sky also features injection molded SMC front fenders. Announced at the show and available in mid-2006 is the 2007 Jeep Wrangler. To be produced in both two- and four-door versions, the Wrangler will have a new removable composite hardtop, featuring for the first time a sliding sunroof, notes Dan Dowdall, VP of international business development for Meridian Automotive Systems (Dearborn, Mich.). Meridian will compression mold the SMC hardtop for DaimlerChrysler.

Composites are featured in new structural and functional roles as well. The Honda Ridgeline pickup was selected by Motor Trend magazine as its "Truck of the Year" for 2006. First displayed in 2005, the full-size truck integrates a multipiece SMC box with a first-ever built-in "trunk" compartment, capable of holding up to 3 golf bags or a 72-quart/68-liter cooler. Also manufactured by Meridian Automotive Systems using a hybrid polyester/vinyl ester SMC, the entire box assembly weighs only 120 lb (55 kg). The floor unit, which integrates the trunk and spare wheel area, consists of four moldings that are assembled by Meridian and supplied to Honda as a complete kit, with the sidewalls, bulkhead and tailgate inner panel. The box surfaces are painted using a spatter process to provide anti-skid characteristics and UV protection.

Ford is also getting into the act: Its 2007 Explorer SportTrac will have a multipiece SMC box, Dorney reveals. ThyssenKrupp Budd is the supplier of the one-piece box on the current SportTrac, but Ford elected to go with a four-piece bonded assembly that permits the incorporation of additional molded-in features, including three in-floor storage bins. While current pickup boxes are painted to protect the resin from UV degradation, Landsettle says to expect a number of future components to take advantage of Ashland's EKADURE resin system, formulated for UV resistance and currently undergoing extensive exposure testing in Florida and Arizona. The resin's "molded-in-color" technology is currently available only in black, suitable for SMC parts with a grained finish, such as truck boxes, because its carbon black pigment plays a crucial dual role as one of the formulation's UV-resistant components.

SMC is not the only composite technology finding its way onto new vehicles at the show. The rear "tub" or trunk compartments of the Pontiac Solstice and the Saturn Sky are produced by Molded Fiber Glass Companies (Ashtabula, Ohio) via a preform and press molding process. Weighing 19.8 lb (9 kg) each, and with dimensions of 51 inches wide by 36 inches long and up to 24 inches deep (130 cm by 91 cm by 61 cm), the tubs are expected to be produced in volumes of 20,000 to 30,000 annually, says Keith Bihary, automotive sales manager for MFG. The preforms are produced robotically via a process called "positive glass placement," notes MFG VP of marketing Glen Warner. The process permits the preform thickness to be varied locally, and patches of SMC or fabric reinforcement can be selectively integrated. The preforms contain 38 to 40 percent glass by weight in 2 to 3 inch (50 to 75 mm) fiber lengths. Molding is accomplished by placing the preform into a heated compression tool and distributing a measured amount of polyester resin over the surface before closing. Advantages of using composite include a reduction in part count from nine steel stampings to one molding, a 30 percent reduction in weight, and improved sound and vibration dampening. Tooling costs are estimated to be some 40 percent lower than steel. The tub is bonded into the steel vehicle at the assembly plant just prior to entering the electrocoat painting lines, where the tub successfully endures temperatures that can can reach 400°F (204°C).

Carbon fiber continues to be of interest to OEMs for high-performance vehicles, says Dowdall, but recent supply constraints and higher prices are limiting its further application for production vehicles. Exposed carbon fiber, in which the woven pattern can be seen, continues to find a home in aftermarket "tuner" vehicles, some of which were on display in the show's special Customization area. One vehicle attracting attention at the show was the BMW M6 — list price $96,795 (USD) — which features a roof panel molded in exposed carbon fiber, a first for a production vehicle, according to BMW. The roof is produced by BMW in Germany, using epoxy resin and the RTM process. A 500-hp engine propels the vehicle from zero to 60 mph (0-100 km/hr) in 4.5 seconds. Other vehicles on display with carbon fiber components included the Chevrolet Corvette Z06, the Mercedes McLaren SLR, and new concepts from Lamborghini and Ferrari.

Challenges to increased composite use remain. The OEMs and a number of suppliers have teamed up to address the issue of how to put SMC parts through the increasing number of OEM paint lines that use powder-based (as opposed to solvent-based) primers. Currently, the SMC parts exhibit wrinkled surfaces and voids, the root cause of which is moisture absorbed after manufacture, during transport and storage, which boils out at paint-line temperatures and interferes with the cure of the powder, explains Dorney. Suppliers are actively working on several solutions, including low-moisture-absorbing substrates, better barrier coats (the first primer layer applied by the molder) and new SMC formulations.

A focus on cost reduction continues, in spite of rising materials prices. Dorney emphasizes that materials account for less than half the price of a composite part, and further, only one-third of the formula is resin, so changes in oil pricing have a reduced impact compared to steel parts, where the steel sheet is over half the finished part cost. As steel prices rise significantly, the gap in piece price is closing. Dowdall says cycle times for SMC parts are coming down as well, due, in part, to formulation and to the use of new in-mold cure-sensing technologies, noting in particular the SmartTrac dielectric cure monitoring system supplied by Signature Control Systems (Denver, Colo.). The system sends a signal to the press to open the mold at a specific point in the cure curve, rather than relying on a fixed time that includes a considerable safety margin to account for operator, material or press variability.

Tyler Hardy, director of engineering for Meridian, believes the industry needs to return to good old-fashioned selling of the advantages composites provide, namely parts consolidation, corrosion resistance and low investment costs. "Let's get back to promoting the styling flexibility of composites," Hardy adds. Based on the vehicles on display in Detroit, it appears that process has already started.