For the composites professionals who gathered from every link in the carbon fiber composites supply chain at CompositesWorld’s Carbon Fiber 2010 conference (Dec. 7-9 in San Diego, Calif.) one significant development in the carbon fiber landscape colored much of the discussion at this three-day event.
#outofautoclave #precursor #polyacrylonitrile 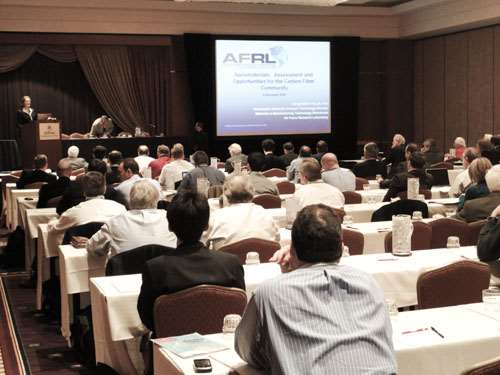 For the composites professionals who gathered from every link in the carbon fiber composites supply chain at CompositesWorld’s Carbon Fiber 2010 conference (Dec. 7-9 in San Diego, Calif.) one significant development in the carbon fiber landscape colored much of the discussion at this three-day event. The bold decision in late 2009 by BMW Group and SGL Group to form a joint venture to manufacture carbon fiber for the forthcoming BMW all-electric Megacity Vehicle — and the subsequent ground breaking of a 3,000-ton carbon fiber plant in Moses Lake, Wash., to supply that carbon fiber — had many conference participants wondering if the BMW/SGL model could be applied to other end markets.

Despite this conundrum, a rising-tide-lifts-all-boats ethos permeated this conference. The trick is figuring out when and where that tide will rise. The BMW/SGL joint venture, SGL Automotive Carbon Fibers GmbH, solves this problem. The carbon fiber produced at the SGL Moses Lake facility is intended for use in the Megacity Vehicle and thus guarantees BMW an adequate supply and SGL a committed customer. On its face, this relationship makes sense, but it is bold and not without risk. As was true with the unprecedented leap in carbon fiber use on Boeing’s 787, the SGL/BMW business model is increasingly seen as a paradigm shift.

Thus, attendees listened carefully during the keynote address on the first morning of the conference. Andreas Wüllner, managing director of SGL Automotive Carbon Fibers, briefed the attendees on the company’s relationship with BMW, the supply chain for the Megacity Vehicle and some details about the use of carbon fiber in the vehicle. The Moses Lake carbon fiber facility, he said, is on schedule to open in mid-2011. When it does, polyacrylonitrile precursor will come to it from a Mitsubishi/SGL joint venture in Japan. Finished 50K tow will leave Moses Lake and arrive in Wackersdorf, Germany, where it will be woven into noncrimp fabrics, which will then travel to Landshut, Germany, for stacking, preforming, stamping, resin transfer molding (RTM) and machining.

Wüllner revealed that the RTM’d parts will be used to construct the “life module,” a carbon fiber structural cage that will comprise the passenger compartment on the four-passenger Megacity Vehicle. It will rest on an aluminum structure that houses the batteries and the electric drivetrain for the vehicle. The resin type and details of the RTM process, to date, have not been shared by SGL or BMW, and Wüllner maintained that silence at the conference. When asked if carbon fiber composites would be used elsewhere on the vehicle (specifically, body panels), Wüllner said they would, but he would not specify where. He also said that the vehicle will not use glass fiber composites.

The life module, reported Wüllner, has already undergone crash testing, and it performed very well. The carbon fiber structure reduces the vehicle’s weight by 30 percent compared to aluminum. As a result, the car’s travel range per charge will be more than 110 miles/177 km.

Many questions from the audience focused on the planned production volume and the price for the car. Wüllner avoided specifics but said, “What we are setting up here is series application. It’s not going to be a niche car.” He then referenced the BMW Mini, which, he noted, is produced in volumes of about 200,000 units per year. As to price, Wüllner was similarly vague, but he noted that it will be like the BMW 1 Series in size and “not a cheap car,” but not unaffordable. Some press reports have pegged the price at $35,000, although it could easily be higher.

The automotive theme was established on the first day during the preconference seminar. The morning was devoted to a series of presentations on carbon fiber in automotive applications, with the most revelatory given by Jim Staargaard, the new president of Plasan Carbon Composites (Bennington, Vt.). Staargaard updated attendees on Plasan’s efforts to develop a sub-20-minute cure cycle for production of Class A composite auto parts. Plasan, he said, has established a 34-minute production line with a 17-minute cure process that involves optimization and automation of pre- and postmolding operations using out-of-autoclave carbon fiber prepreg (see our feature this issue on OOA prepregs and processing systems under "Editor's Picks," at right).

Key technologies in this chain, noted Staargaard, are preforming of the prepregs and synchronized heated tooling in a compression molding press supplied by Globe Machine Manufacturing Co. (Tacoma, Wash.). The tool, manufactured by Weber Manufacturing Technologies Inc. (Midland, Ontario, Canada), has a nickel-shell construction with copper heat-transfer lines. Plasan sees the 17-minute cure as a promising start, but Staargaard contended that more time could be saved with automated fiber placement, faster cure in the press, waterjet cutting and the elimination of manual sanding. He predicted that by 2014 there will be a cure cycle of 13 minutes and a part-to-part cycle time of 27.75 minutes. With four tools running such a cycle, Plasan estimates it could produce more than 41,000 parts annually.

Pichler noted that 10 years ago the value of carbon fiber in aerospace applications represented about two-thirds of all carbon fiber value in the composites market. Today, that number has dropped to less than half, with industrial sitting right at 50 percent. By 2020, the industrial sector (much of it devoted to wind blades) could consume much more than half of the value of the carbon fiber market and close to 75 percent of shipments.

Look for HPC’s thorough report on the Carbon Fiber 2010 conference, including a complete outlook for carbon fiber supply and demand, in the March 2011 issue.