Equipment OEM Dieffenbacher GmbH last year introduced a new line of compression presses that are lighter, feature a more open design and have a smaller base area and lower above-ground height. These are short-stroke presses where the bottom platen also moves up to complete the stroke after the ram has closed the upper platen most of the way. They are capable of very fast (1,200 millimeters per second) close/open speeds, are highly customizable yet modular and energy efficient. Source | Dieffenbacher GmbH

Compression molding presses have been around for a long time, but keep evolving in response to the needs of the composites industry. For example, in 2012, Dieffenbacher GmbH (Eppingen, Germany) introduced a line of more open-architecture presses to meet the needs of the then rapidly expanding market for high-pressure resin transfer molding (HP-RTM), and later wet-pressing/liquid composite molding (LCM) in the European automotive industry. Compared to earlier, monoblock-type presses (with a single, massive central frame and enclosed sides), these CompressLite presses, as the models were called, became known for their more open architecture, featuring four large, weight-bearing columns at the press’s four corners and “open” side structures. The latter provided space to run hoses for mixing heads and piping directly into the tool for the aforementioned wet-chemistry processes. They also enabled robotic access on either side of the press to insert material and remove formed parts.

On either side of that press is a preheating station that is joined to the other station via a shuttle system. When one tool is mounted in the press and producing parts, another tool warms in one of the two preheating stations. When production ends, the shuttle moves the current tool out of the press and into the empty preheating station, then slides the warm tool that’s been waiting into the press. Quick connect/disconnect features permit a tool changeover as fast as 5 minutes. This shaves 30-60 minutes off typical changeover times, reduces risk of technicians burning themselves on hot tools and facilitates a short, just-in-sequence (JIS) production run without requiring fabricators to produce and store parts.

Other features available on CompressLite presses included the option for extremely fast close/open rates of 1,200 millimeters per second — speeds seen more often in metal stamping than in composite forming. This made them ideal for pressing faster-cycling thermoplastic composites, although they also can mold thermosets too.

The CompressLite models were forerunners of a new series of energy-efficient, modular, highly customizable, full-featured, smaller-footprint compression presses that debuted last year and that the company calls Fiberpress.

Stripped to the essentials

Dieffenbacher engineers took the best features of earlier CompressLite presses, stripped those features down to the essentials, and used them to redesign the new Fiberpress equipment, which is lighter and characterized by both reduced base area and lower above-ground height. The smaller size makes it easier to install them in existing — particularly, older — buildings with low ceilings; it also makes them less costly and logistically less challenging to ship than monoblock presses, whose massive central welded frames cannot be disassembled for transport. 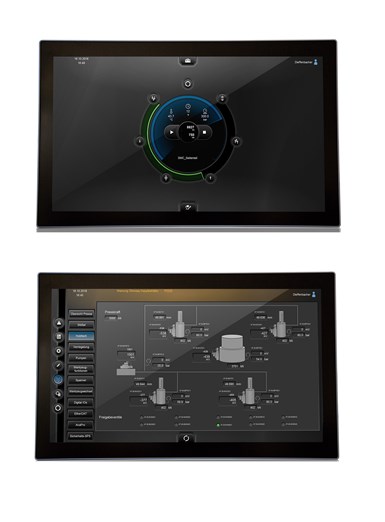 Dieffenbacher engineers took the best features of an earlier product line, stripped those features down to the essentials, and used them to redesign the Fiberpress machines. Even the customer interface on the control panels has been redesigned to be clean, intuitive, and to show critical information at a glance. Source | Dieffenbacher GmbH

Conventional long-stroke compression presses feature a stationary bottom platen, and the entire stroke is completed by the ram pushing down or pulling up on the upper platen. However, with these short-stroke presses, the upper platen rapidly moves down part of the way (providing the closing stroke) and locks, creating a frame structure. Then the lower platen completes the stroke by rising up to meet it. Four rapid-closing cylinders are positioned in pairs near the support columns on the left and right sides of the press. Five additional cylinders positioned under the lower platen in the pit/basement (four leveling cylinders on the four corners and a big working cylinder in the center) provide platen leveling and complete the compression stroke.

“The Fiberpress system uses a completely different idea and design,” explains Marco Hahn, Dieffenbacher sales director for the composite business unit. “It doesn’t use a fixed frame, as with earlier systems, only four columns at the outer edge of the press that bear all of the weight. That’s why we need the cylinders, which not only provide high-speed open and close but also do the guiding [rough leveling]. In fact, the guiding function is now provided solely by the hydraulics. This, in turn, means the ram can be kept parallel even during rapid machine cycles, and with asymmetrical tools representing a variable load that could otherwise tilt and twist the table [platen].”

The simplicity of this approach is said to reduce or eliminate complex mechanical components used in CompressLite and earlier generation presses, and that, in turn, helps take mass and structure out of the “crown” (top) of the press, which makes them easier to fit in buildings with low ceilings. However, it does necessitate placing a lot of the hydraulics at floor level or in the below-ground pit where the lower structure of these large vertical presses sits.

Fiberpress systems are equipped with Dieffenbacher’s high-speed, precise parallelism control. The presses can calculate tolerance differences between the bending line of the ram and the platen. It also can adjust deflection of the platen to deliver constant parallelism so that molders can maintain consistent part thickness, which is critical on big parts. Parallelism is controlled via a three-plate design, which includes ram/upper platen, lower platen and press bed. Pressure simultaneously builds in the central/working cylinder as well as the four lower parallel cylinders at the corners of the press, causing the tool to be stressed evenly, so parts achieve high repeatability and reproducibility with low wear to the press and tool.

The new presses make use of a modular design characterized by far more common components (such as a single pump type for all models) than earlier technology. Depending on molding cycle and press size, the biggest difference between models is often just the number of pumps used. This modularity simplifies spare-parts inventory and speeds installation and commission of new systems. The press’ more open design also permits easier access to components like the hydraulic drive and cylinders, simplifying maintenance. These systems are said to consume up to 35% less energy than long-stroke presses.

The control system interface also has been simplified. “After numerous discussions with customers and several internal workshops, we developed a smart visualization approach,” explains Manfred Reif, Dieffenbacher managing director of the composite business unit. “Again, we focused on the essentials, so the new visualization offers intelligent, intuitive operation and a tidy surface that enables an operator to determine current machine status at a glance. And, to reduce machine downtime, we’ve clearly arranged function displays to indicate deviations from the programed value.”

While modular, the Fiberpress line is also customizable. For example, several types of rapid tool-change systems are available, as are faster close/open rates.

Standard attributes like table size, daylight opening, stroke length and press force can also be customized. A standard range of clamp tonnages from 1,000 to 5,200 metric tons is offered, but other configurations are possible.

Dieffenbacher says lead time on Fiberpress orders is only eight months, which is 25% faster than that for their previous presses. “We also made our software very lean, so commissioning times have been reduced from an average of five to seven weeks to as little as four weeks, depending on final press size,” Reif says. “Even though a customer can select which features to add, making each press unique, we’ve put a lot of engineering into creating these simplified, modular assemblies using common components that reduce spare-part inventory and enable faster installation and commissioning.”