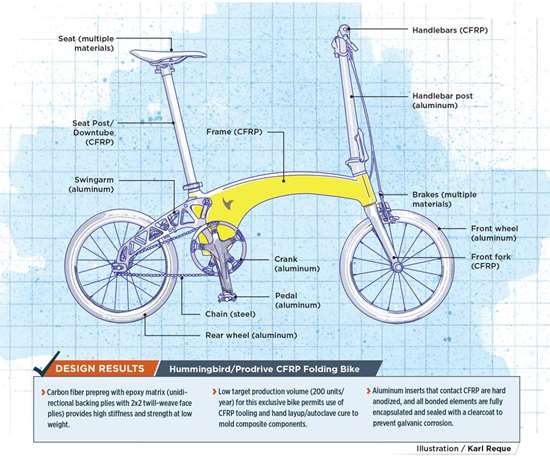 A better bike for multi-modal commuters

For urban commuters who must switch from bike to train/subway or bus, most foldable bikes available today are still fairly heavy and not so compact or easy to carry. When the day is done, they’re also difficult to redeploy. And they’re uncomfortable to ride any great distance. UK-based Hummingbird Bike Co. Ltd.’s innovative alternatives are designed to address those challenges. Made with key structural parts of CFRP, its ultralight bikes collapse and redeploy easily and can even fit into a standard suitcase.

Small enough to take along and carry on

There are several Hummingbird options available, based on paint color — yellow (shown here), red, burnt orange, black, blue or visible carbon fiber weave — and capability, one or four gear speeds. Deployed bikes (far left) are designed to fit riders from 157-195 cm in height, weighing as much as 110 kg, including baggage. The bike’s three-point folding pattern can result in two fold levels: compact (hand-carriable, achievable in seconds, shown second from right) and more compact (suitcase-stowable, achieved in a little more than a minute, far right).

Currently the world’s lightest folding bike at 6.9 kg, the Hummingbird achieves this distinction with a carbon fiber composite frame — here, in yellow — and front fork (bottom photo), handlebars (top right) and seat downtube (center left). Retail price is ₤3,495/US$4,700, including value-added tax (VAT), for a one-speed, or ₤3,795/US$5,103 for the four-speed version. (Add ₤500/US$672 to each for the visible-carbon-fiber-weave option.)

Folding bicycles hold the promise of an easier life for urban commuters who now switch from bike to train/subway or bus. A bike that can be folded, carried to work, then redeployed upon return to the street eliminates the cost of locker storage in public locations, with the attendant risks of theft or vandalization. Unfortunately, the reality, today, in such multi-modal transportation arrangements is that most folding bikes are fairly heavy, not so compact and uncomfortable to ride any great distance. That is changing, thanks to an innovative UK-based startup.

Folding bikes must be strong and stiff enough to take daily pounding on concrete and asphalt, yet light enough to carry. They must fold compactly for carrying/storage, but redeploy quickly and easily. Not surprisingly, they’re often made of composites — particularly carbon fiber-reinforced plastics (CFRP), but the challenge has been to reduce mass and folded dimensions, yet build a bike that can hold up to daily use without becoming cost-prohibitive.

Architectural modelmaker and biking enthusiast Petre Craciun recently accepted the challenge to build a better folding bike after watching girlfriend Ligia Stan, who commutes around London, struggle to carry her heavy bike upstairs to their apartment. The result, created with support from motorsport and advanced-engineering group Prodrive (Banbury, Oxfordshire, UK), is the Hummingbird, (now sold by Hummingbird Bike Co. Ltd., London, UK), said to be currently the world’s lightest folding bike, at 6.9 kg.

Craciun, self-described as “passionate to optimize things and solve problems,” first built a working prototype, then launched a successful fundraising campaign on Kickstarter.com (Brooklyn, NY, US) to commercialize it. Meanwhile, Stan rode the prototype to work and showed her two bosses, who loved how small and light it was. Both became early investors in the new company. One funding partner knew Prodrive founder and chair David Richards, and suggested that he try the bike. Richards gave it a spin and offered to help engineer it for production. The first bike rolled out 12 months later.

The bike’s basic design has not fundamentally changed since Craciun conceived it. The frame, handlebars, seat downtube and front fork are composite. The swingarm, wheels and drive assembly are aluminum alloy. The engineering focus was to meet safety standards and facilitate manufacture. “The team wanted to create a folding bike that felt a lot more like a traditional bike, but with a taller adjustable handlebar system and seat post to accommodate a wider range of users,” notes Craciun. “That gave us the opportunity to make Hummingbird fit a wider range of rider positions. We ended up with a saddle that can be moved up/down, forward/back and angled up/down to improve rider comfort and get the best fit.”

“The biggest challenge we faced with the base-model bike,” recalls Phil Sherwood, Prodrive’s composites engineer, “was trying to hit target weight. That made mass a consideration on every single component ... while we also focused on maintaining quality of ride and handling.”

“Our original weight target was less than 7 kg, but we aspired to get to 6.5 kg,” adds Craciun. “In the end, a few weight tradeoffs were made around the drivetrain components in favor of enhanced reliability and availability of components, which left us at 6.9 kg. We wanted people to be able to get their bike serviced at local bike shops, so we steered away from very specialists’ stuff.”

A unique bike feature is its three-point folding pattern. Its anodized-aluminum Swinglock folding mechanism permits the rear triangle to fold around the bottom bracket without changing chain tension. This eliminates chain tensioners and the need to re-adjust chain tension when the bike is redeployed. A post that doubles as the brake-assembly mount also braces the rear triangle. “The folding mechanism was key to the bike’s design and was covered extensively in Petre’s sketchbooks on all the different ways to fold a bike,” recalls Ryan Vann, a Prodrive structural analysis engineer. “Removing the central frame hinge that’s featured on many other ‘folders’ was key to achieving the ride and handling characteristics we love.”

The folding mechanism formed the main design case for integration to the composite frame, and stress analysis and design work focused on making this arrangement work. Given that the main pedaling forces are located around the bottom bracket, this region must be the strongest part of the frame. The team used Abaqus Explicit from Dassault Systèmes (Vélizy-Villacoublay, France) for dynamic structural analyses and Optistruct from Altair Engineering Inc. (Troy, MI, US) for linear static analysis and topology optimization.

“The biggest design iterations involved packaging the rear swingarm assembly to reduce weight, maintain required stiffness and make it beautiful at the same time,” explains Vann. “This was quite a change from the original version to its final form where we are doing the same job at half the weight.” Although the hardware to achieve this fold was predominantly off the shelf, it was necessary to create some bespoke elements. “Some people feel these are design flaws, but it’s all very intentional, and in the end, quite a simple system, really,” adds Vann.

The folding and locking mechanism design evolved into a system with two levels of folding: compact and more compact. The first can be executed in three moves, in less than 5 seconds, folding to 110 by 20 by 55 cm. The more compact version (85 by 20 by 55 cm) takes a minute longer. The front wheel is removed and stowed on the swingarm dropout, then the seat tube is removed and slotted between the wheels, making the bike suitcase-friendly.

Although carbon fiber composite was key for achieving structural-performance targets at the lowest weight, the team considered basalt fiber-reinforced backing plies, because that fiber would deliver a modulus value between those of glass and carbon at lower cost. But basalt use caused weight to exceed the target, so the idea was shelved. “Type and layup of the composite reinforcement were extensively discussed between manufacturing and structural analysis teams to develop a feasible manufacturing solution that still met the design’s structural requirements,” adds Sherwood.

The components use carbon fiber-reinforced epoxy prepreg (from Microtex Composites Srl., Via Toscana, Italy) that is hand laid up and vacuum-bag/autoclave-cured on CFRP tools. Bladders are used to create hollow tubular structures. For the frame, loose tool inserts are used to create all mating surfaces where seat/head and bottom bracket are inserted and bonded during assembly. Microtex’s X1 Matrix epoxy system was selected for its structural performance and visual clarity. Fully cured resin is rated for a continuous-use temperature of 80°C. The 2x2 twill-weave, bi-directional surface plies use 245g fabric while unidirectional backing plies are 660g and also are used as added reinforcements in high-stress areas. Each handmade bike takes about 18.5 hours to produce.

Working on a bike is a bit of a departure, but Prodrive technicians now apply to the bike the same rigorous process, involving the comprehensive build manuals and end-of-line quality checks they use to assemble complex automotive systems. Manufacturing in Asia would reduce pricing, but the team’s concern for quality trumped outsourcing. “This is a beautiful product as well as a functional one and we wanted to retain control of that and be able to stand by the ‘Handmade in Britain’ tag,” explains Chris Walkingshaw, Prodrive project manager.

That tag, however, means the bike’s price tag (a base of £3,495/US$4,700) will be out of reach for many. “We feel the price represents the quality of the design and the level of craftsmanship that goes into hand-producing every bike,” notes Craciun. “We don’t plan to make many,” he adds — target sales for years one and two are 200 bikes per year, “so it’s quite an exclusive club.”

That said, Hummingbirds have been available to consumers via the company’s Web site since July 2017, and from a UK online retailer with several shops since December 2017. They are said to be getting good media reviews and sales are steady. Bikes have shipped to customers not only in the UK but also in Europe, the US, Mexico, Japan and Australia. “Our customers keep sending us pictures of their bikes in all kinds of great locations, so we know they’re making their way around the world,” laughs Craciun.

Looking ahead, Hummingbird and Prodrive are keen to expand into related products. “At the moment, we’re focused on, and excited about, the mid-2018 release of belt-drive and electric versions of the bike,” says Craciun. “We also have some accessories we’d like to introduce so people can get more from the product they’ve already purchased.” Carrying cases to facilitate transport are on the wish list. “We’ve tried about 50 aftermarket cases to see if any are compatible, but we have yet to find any we like enough to carry our bike,” reports Walkingshaw. A custom case is in the works at Prodrive.

“Even though we are quite a small team …, we’ve delivered a fantastic product,” explains Craciun. “We’re aware we can’t do everything at once, so we’re prioritizing our focus on delivering a great bike. We have future upgrades and models in the pipeline.”