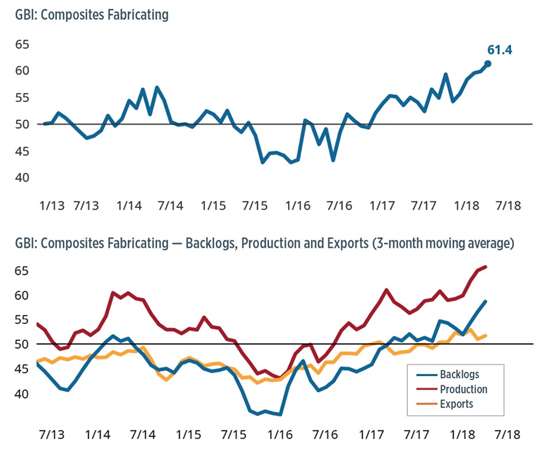 The Composites Fabricating Index has now established three consecutive record-high readings. With the exception of New Orders, all components of the Index are at or near all-time high levels. Despite record-setting Production growth and a slowing in the growth of New Orders, survey data indicate that Backlogs increased at their fastest rate in CFI history. Further, a growing segment of the New Order demand in 2018 is that from foreign customers.

The GBI: Composites Fabricating Index closed April at 61.4. It was the highest number reached since the Index was first recorded in November 2011, and broke its previous all-time high reached just one month earlier. Compared to the same month one year ago, the Index has increased 13.6%.

Of the six components used to calculate the overall Index, three also set record highs during the month: Exports, Backlogs and Employment. Although the Production and Supplier
Deliveries sub-indices did not post record-setting numbers in April, they were within a fraction of a point of their all-time high readings. Only New Orders, which registered its all-time high in March, did not break or come very near its record-high number.

The Gardner Intelligence team’s review of the month’s underlying data indicates that
the Index — an averages-based calculation — was lifted higher by Production, Backlogs, Supplier Deliveries and Employment, while New Orders came in just slightly below the overall Index. Exports was the only subcomponent to significantly pull the Index lower, while simultaneously attaining a multi-year high reading. That said, all Index components registered expansion (>50.0) during April.