Composites help take the waste out of wastewater

Adequate water resources in the state of California are a matter of some urgency, creating new opportunities for composites. California’s seven-year drought, which officially ended in March 2019, heated already simmering water wars between farmers, citizens in cities, technologists, manufacturers and environmentalists. 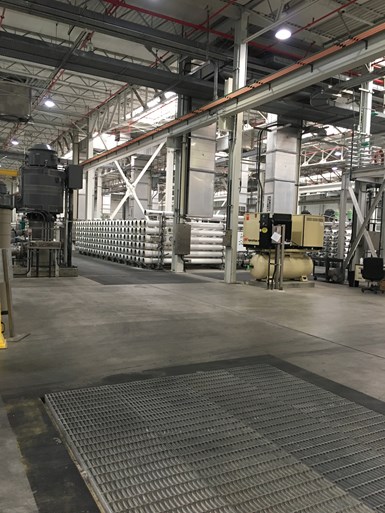 The state has several operations and ideas for accomplishing this, notably: 1) increased water storage infrastructure; 2) digging one or two tunnels under the Sacramento-San Joaquin Bay Delta — called WaterFix — for better-controlled conveyance of water from the Sacramento River to some 27 million people in Southern California; 3) wastewater recycling; 4) seawater desalination; and 5) improved recharging of aquifers (groundwater).

Composite materials do or will play a role in all of these applications, but most particularly in wastewater recycling, groundwater storage and seawater desalination. This summary explores wastewater recycling and groundwater storage efforts. You can find a detailed assessment of composites use in seawater desalination systems here.

Composites as an enabling technology

The composite materials and process in question are filament wound fiberglass-reinforced plastic (FRP) pressure vessels, which have proven to be an enabling technology for producing clean water through municipal wastewater recycling and seawater reverse osmosis (SWRO) desalination. FRP pressure vessels were initially developed in the late 1970s and early ‘80s to replace steel pipe for the essential reverse osmosis (RO) stage of the SWRO process. Steel had serious issues with corrosion, weight and quality of the inside surface for this process, all of which were addressed and resolved by FRP pressure vessels. While the high pressures of SWRO — up to 1,200 psi — exposed serious quality inconsistencies in FRP fabrication processes, these were resolved by the end of the 1980s through standards established by the Boiler and Pressure Vessel Code of the American Society of Mechanical Engineers (ASME). 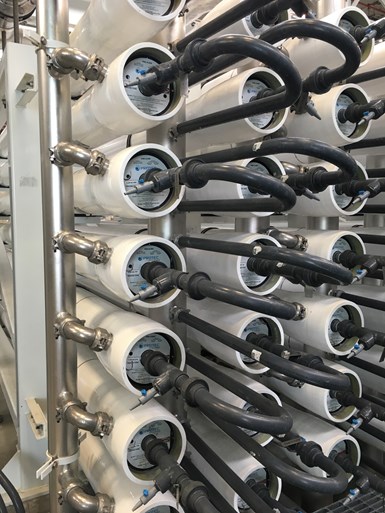 Fig. 3. A closer look at the vessels Each vessel is loaded with seven RO membrane elements made of a semipermeable polyamide polymer (Dow Filmtec, from DuPont). CW photo | Donna Dawson

The greatest beneficiary of composite materials in the water﻿ treatment process is ﻿reverse osmosis, which depends on pumping pretreated feed water (wastewater or seawater) under pressure through a series of semipermeable RO membrane elements, which are encased in FRP composite pressure vessels. A group of pressure vessels — all fed through a common pressurized header — is called a train, and the trains are arranged in racks.

Doug Eisberg, director of business development for Avista Technologies, a Kurita Co., in San Marcos, Calif., explicates the process: “The pressure forces the small water molecules in the feed water through the membranes, leaving larger and unwanted molecules and larger particles behind. RO sends all the purified water to a common collection point, and sends the bacteria, viruses, salt and other undesirables on through to the next membrane, where further separation occurs.” Eisberg calls it a separation process, rather than a filtration process, “as it does not collect impurities in the way a common filter does, but rather separates the water streams — one purified and the other not.” Avista supplies specialty chemicals and technical support services for the membrane separation industry. Read ﻿more about the possibilities for composites in seawater desalination.

SWRO is, arguably, the best known method for purifying drinking water, but a close second is wastewater recycling, which uses purification systems that are basically the same as SWRO, except for the lower pressures required (~300 psi) because of the near absence of salt in wastewater.

Richard Chmielewski, sales manager for Protec-Arisawa (Vista, Calif.) explains the advantages for pressure vessels: “Because the salts are much more dilute, we don’t have to run at SWRO’s high pressure. The salt concentration of Pacific Ocean seawater is 3.5%, resulting in osmotic pressure of around 400 psi. In contrast, since a community’s waste is composed of mostly water (plus various contaminants from kitchens, laundry and bathroom), the salt concentration and consequently the osmotic pressure is much, much less — typically less than 0.2% salts. The resulting operating pressures are thus much, much lower.” (See Fig. 4)

Making pressure pipes for recycling is therefore much less expensive, and RO operation is less expensive and less energy-intensive, as well. Chmielewski adds, “For people in a coastal area, seawater desalination is a good option for increasing clean water supplies. But for those who are inland, or in the mountains, that is not an option. It makes economic sense to invest in reuse of wastewater as a renewable source.”

Southern California can especially benefit because its sizable population relies heavily on imported water from the Colorado River and Northern California, exposing its population to cost increases, drought and other forces not under local control.

In March 2019, The Freedonia Group (Cleveland, Ohio, U.S.) projected global demand for membrane separation technologies (including RO) to rise 6.5% per year to $31.7 billion in 2023, supported in large part by stricter standards for drinking water and wastewater treatment and increasing wastewater recycling and reuse. Additionally, Grand View Research Inc. (San Francisco) recently reported it anticipates the global water and wastewater treatment equipment market size will reach $36.65 billion by 2025. Wastewater treatment alone is projected to reach a market size of $16.59 billion by 2025. The Grand View report adds that growing adoption of technologies such as reverse osmosis and others for wastewater treatment is likely to supplement demand due to the ability to reduce operating expenditures.

Under the Safe Drinking Water Act (SDWA), the U.S. Environmental Protection Agency (EPA) has authority to set the standards for drinking water quality and to oversee state, localities and water suppliers who implement those standards. The EPA has set maximum levels and/or treatment technique requirements for more than 90 contaminants in public drinking water. In California, Title 22 of California's Water Recycling Criteria offers state guidelines for how treated and recycled water is discharged and used. The standards also require the state's Department of Health Services to develop and enforce water and bacteriological treatment standards for water recycling and reuse.

Significantly for the environment, without recycling, secondary treated sewage water is typically discharged directly into the ocean — affecting the marine life (as well as surfers and swimmers). Recycling wastewater means less water is discharged, improving the environmental condition of our coastal waters.

Recent legislative actions in California include SB 332, the Local Water Reliability Act, introduced in February 2019 by California legislators, which, though currently held by the committee, would call on wastewater treatment facilities to step up recycling, conservation and efficiency to reduce the amount of treated wastewater dumped in estuaries and the Pacific Ocean by 50% before 2030, and 95% by 2040. Nationally, four western U.S. Senators have introduced bipartisan drought legislation that would extend the Water Infrastructure Improvements for the Nation (WIIN) Act, including $100 million for water recycling projects.

Southern California’s Orange County Water District (OCWD) Ground Water Replenishment System (GWRS, Fountain Valley, Calif.) proved the technology of wastewater recycling to meet state and federal drinking water standards and is one of the largest such facilities in the world. Mehul Patel, executive director of operations for GWRS explains, “The GWRS project takes secondary treated wastewater and converts it to ultrapure water for replenishing our local groundwater aquifer as well as protecting it from seawater intrusion.” The project went online in January 2008 with a capacity of 70 million gallons per day (mgd) and was expanded in 2015 to 100 mgd — 36.5 billion gallons per year — enough for 850,000 people. Final expansion, currently in progress, will bring capacity to 130 mgd in 2023.

Within these steps, i﻿n addition to the vital pressure vessels, composites are ubiquitous in recycling plants for piping and fittings, tanks, grating, ladders, material platforms and more.

Of the current 100 mgd GWRS production, about 65 mgd are pumped to the recharge basins. The remaining ~35 mgd is pumped into injection wells, where it serves as a seawater intrusion barrier to counter the threat of salt water from the ocean contaminating Orange County’s aquifer.

Though the first and arguably the largest, Orange County’s plant is by no means the only wastewater recycling plant in California. And, “All advanced treatment facilities for reuse in California have a reverse osmosis system,” Patel states. As another example, Pure Water San Diego is the City of San Diego’s phased, multi-year wastewater treatment program that will provide one-third of San Diego’s water supply locally by 2035. San Diego Mayor Kevin Faulconer calls the Pure Water Project “one of the most important infrastructure projects in city history.”

Using a process similar to GWRS (see Fig. 7), a demonstration facility has produced 1 mgd of purified water since June 2011, using for its RO step 37 fiberglass pressure vessels rated for 300 psi, made by Protec-Arisawa. Phase 1 construction of a full production facility in the North City area will be completed by 2023. An additional 1,400 pressure vessels will be installed for Phase 1, which will produce 30 mgd. Phases 2 and 3 in the Central Area and South Bay of San Diego are designed to provide another 53 mgd by 2035, which will also require pressure vessels for their RO step; the actual quantity, though, has not yet been determined.

In addition, San Diego’s East County has announced that it expects to generate up to 11.5 mgd of new drinking water through its Advanced Water Purification Program. While still in planning, this is designed to provide about 30% of current drinking water demands for residents in the Padre Dam and Helix service areas. Four advanced water purification steps will produce water that is near-distilled in quality. The purified water will then be blended with water in Lake Jennings and treated at the R.M. Levy Water Treatment Plant before being distributed as drinking water. Fig. 8  Purifying brackish groundwater The Robert W. Goldsworthy Groundwater Desalter in Torrance produces 5 mgd, to supply 15,000 households. The feed water is actually from seawater intrusion into the groundwater that occurred in the 1950s and 60s, when too much fresh water was extracted from underground reservoirs. The desalter depends in large part on RO as its core treatment technology — with its essential fiberglass pressure vessels. Further expansion of brackish groundwater desalting is anticipated in the next few years. Source | WRD

The recycled product water West Basin produces for groundwater recharge meets drinking water standards and is delivered to the Water Replenishment District (WRD, in Lakewood). WRD manages and protects local groundwater for 4 million residents over a 420-square-mile region of southern Los Angeles County and is the largest groundwater agency in California. The 43 cities in its service area use ~225 mgd (~82 billion gallons/year), accounting for about half of the region’s water supply. WRD was said to be on track to becoming completely independent from imported water by the end of 2019.

The Los Angeles Times reported in February 2019 that Mayor Eric Garcetti has vowed that Los Angeles will be recycling all of its wastewater by 2035 through its Hyperion Water Reclamation Plant. The proposed water project could cost $8 billion, take 16 years to complete and provide as much as one-third of the city’s supply, reducing the city’s need for imported supplies.

Other areas in California that CW was able to identify as operating or planning recycling facilities for drinking water or other purposes include, in Southern California, the Irvine Ranch Water District, the Montebello Forebay Groundwater Recharge Project, the Inland Empire Utilities Agency in Chino, the Long Beach Water Department and the Metropolitan Water District of Southern California. In Northern California, the Santa Rosa Subregional Recycled Water Program (Sonoma County), the East Bay Municipal Utility District (Oakland), San Francisco Public Utilities Commission, and the Monterey County Water Recycling Projects are either operating or in planning stages.