There are a variety of reasons to build and launch unmanned lunar rovers — robotic, remote-controlled space exploration vehicles built to travel on the moon’s surface — including collection of data through onboard sensors, or transporting equipment. Since the late 1960s, four unmanned rovers have successfully driven on the moon (Russia’s Lunokhods and China’s Yutus), though none yet from the United States, with many more in various stages of planning, development and testing.

One such rover, with plans to launch by the end of 2021, is a carbon fiber composite “2-kilogram shoebox on wheels,” as described by Nicholas Acuna, undergraduate research assistant at Carnegie Mellon University (CMU, Pittsburgh, Pa., U.S.) and mechanical lead for the Iris lunar rover program.

CMU’s lunar robotics program began accelerating in 2014, after the school’s Andy lunar rover concept won CMU a $500,000 prize for mobility in the Lunar X Prize challenge. Though the original Andy rover was, ultimately, too large, heavy and expensive to transport to be a viable option for space, it served as a springboard for the smaller designs that came after it, which eventually merged into today’s Iris rover.

Iris, a remote-controlled and battery-operated robotic system in development since 2017, is scheduled to launch in the second half of 2021 aboard a United Launch Alliance (ULA, Centennial, Colo., U.S.) Vulcan Centaur rocket, and will travel to the northeastern part of the moon on board Astrobotic’s (Pittsburgh, Pa., U.S.) Peregrine lander, where it will then be deployed for about 72 hours to serve as a demonstrator of the technology and to use its onboard sensors to capture data about the moon’s surface. Should its mission be successful, Iris will serve as a model for future nano-rovers.

The rover comprises a box-like, carbon fiber composite chassis, in which the motors, lenses and cameras, and remote control equipment are housed, with four oversized, bottle cap-shaped carbon fiber composite wheels fixed to the outside. Acuna explains that there is a lot of empty space within the chassis, minimizing weight while enabling attachment of relatively large wheels for climbing over obstacles. “We wanted to try to [develop a rover] as big as possible in terms of volume, while still hitting our mass budget,” Acuna says.

The original design for Iris incorporated only two larger wheels and a stabilizing structure resembling a “tail” on the back for balance. This design was intended to minimize mass, Acuna says, but one drawback was that it could only move forward. As the overall design became better optimized, the two-wheel iteration was dropped for its current four-wheel design in fall 2018 to add capability for moving forward and backward. 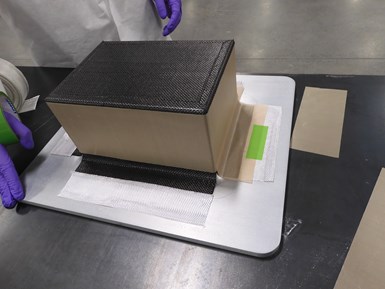 The chassis, which measures approximately 250 × 175 × 105 millimeters, is built by composites fabricator Janicki Industries (Sedro-Woolley, Wash., U.S.), while the wheels were designed and built in-house by CMU researchers. For the chassis, CMU provided the requirements and part design, and Janicki provided its aerostructures expertise to guide materials selection, ply schedule and ply layout design.

According to Todd Chace, director of research and development at Janicki, one of the most challenging aspects to the chassis manufacture was that several pieces of the rover’s hardware need to attach directly to the chassis, requiring particular precision and care to avoid wrinkling or splices in the material. In addition, the resin system used for the part needed to meet stringent outgassing requirements set by NASA; Solvay Composite Materials’ (Alpharetta, Ga., U.S.) MTM45-1 3K carbon fiber/epoxy prepreg was chosen to meet these requirements.

Ready for the moon. Janicki built three identical chassis components — one for testing, one for backup and one to take to the moon. The component was carefully designed to meet stringent space requirements and to hold Iris’s sensors, cameras, batteries and wheel attachments. Photo Credit: Janicki Industries

Three identical parts were manufactured. The first chassis was used for shock and vibration testing to simulate launch and landing conditions. The remaining two will be assembled for flight — one for the mission and the other on standby in case of any issues leading up to launch.

Designing the wheels: A learning process

Originally, Iris’ wheels comprised a seven-point disc stampformed from aluminum mesh. Unfortunately, Acuna says, these wheels had trouble rolling efficiently, were difficult to manufacture without breakage and weighed 50 grams more than the 25-gram weight target for each of the 18-centimeter-diameter wheels.

When he joined the research group in the spring of 2019, Acuna led the development of the current wheel design. “I came up with the geometry and calculated out the dimensions of it,” he says, and, after several design iterations, first using folded paper, and then with actual composite materials, developed the 12-spoked, carbon fiber composite version of the wheels on the rover today. The spokes — called grousers — are formed close together and pointed to give the wheels better traction over difficult terrain. The main body of the wheel comprises Teijin (Tokyo, Japan) Tenax HTS40 spread tow carbon fiber (distributed through Composite Envisions, Wasau, Wis., U.S.) and Hexion (Columbus, Ohio, U.S.) EPON 862 epoxy (distributed through Miller-Stephenson Chemical Co., Danbury, Conn., U.S.), with Hexion’s Epikure W as a curing agent. The disc is stiffened by spokes made of 76-gsm TeXtreme (Borås, Sweden) MS0SC unidirectional tapes reinforced with a 1K layer of Toray Composites Materials America (Tacoma, Wash., U.S.) T300 plain weave.

Built for space travel. The spokes — called grousers — on each of Iris’s bottle cap-shaped wheels operate sort of like cleats or spikes on athletic footwear, designed to help the rover dig into and traverse the rocky lunar landscape. Photo Credit: Carnegie Mellon University

“The carbon fiber ‘bottle cap’ wheels that CMU produced are really interesting,” notes Janicki’s Chace. “They found a simple and lightweight method to add rigidity to the wheels and provide traction for the vehicle.”

One particularly challenging requirement from a materials choice standpoint, according to Acuna, was making sure that all of the materials used had low outgassing and were compatible with the lander and rocket that Iris will be riding to its destination. “Every single material on the rover is going to be exposed to the vacuum of space, and if anything releases vapors under vacuum, there’s a possibility of condensation on the lander’s lenses,” he says. 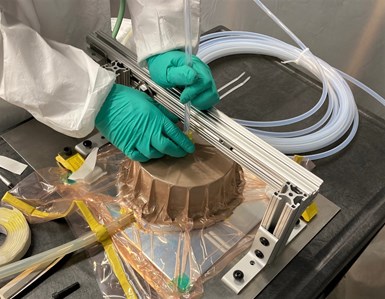 The first successful iterations of the wheel design were built via wet layup; once the design was finalized, Samuel Porter, a graduate research assistant and master’s in mechanical engineering student at CMU who works on the Robotics Institutes’ composites development team, helped develop a more repeatable and efficient vacuum infusion process. “The main challenge that we had is the fabric doesn’t want to drape across the corners,” Porter says. To solve this, the team stacks the plies of fabric and three layers of a Teflon-coated peel ply on top of the mold, held in place with custom fixtures that Porter developed, and pulls the material onto the mold shape using a vacuum bag. Once conformed to the mold, the part is moved into an oven and infused at an elevated temperature to keep the resin viscosity low, followed by oven cure.

“In terms of the process, I think we’ve come such a long way,” Porter says. He helped to establish the research group’s quality assurance plan to bring the laboratory up to space-quality levels, including building of a cleanroom, establishing safety procedures and improving the manufacture of the rover into a repeatable, thoroughly documented process. 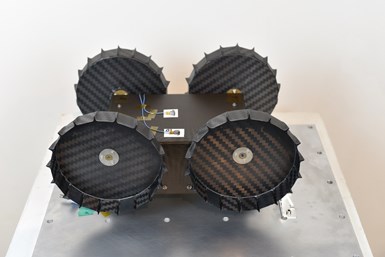 Next step: launch. A fully assembled test version of the rover had to pass rigorous vibration, impact, temperature and other qualifications prior to building of the final flight rover. Photo Credit: Janicki Industries

Iris was developed to meet NASA’s General Environmental Verification Standards (GEVS), as well as requirements set by Astrobotic for deployment of the rover aboard the Peregrine lander. The third full-scale iteration of the rover, called EM-3, or Engineering Model 3, was built and tested in launch-equivalent environmental testing, which included random vibration testing, sinusoidal vibration testing and shock testing to make sure the rover can handle the resonance and vibrations of space travel and landing. An acoustic evaluation and temperature testing were also implemented. These tests guided changes needed for the final flight model.

Once this final model is complete and tested, Iris will be ready for launch. Acuna and Porter, and all of the other students who have worked on Iris and its predecessors over the past few years, are excited to see a project come to fruition that, for them, started out as an academic extracurricular activity. Acuna says, “I was a freshman when I first joined, and didn’t think there’d be much I’d be able to contribute. At first, it just seemed like a far-off dream that the wheel I was working on could end up being on the flight rover and flying to the moon. Now, we’re almost there, and it’s just crazy for me to think it’s actually going to happen.”

For CMU, it doesn’t stop with Iris, either: Though Iris will be the first to be deployed, it’s only one of several lunar robotics projects at CMU. For example, Moon Ranger, a larger, 13-kilogram lunar rover that also features extensive composites use, is expected to be deployed in 2022 to the moon’s south pole.