Although composites have made some inroads in automotive body-in-white (BIW) structures, materials use in this area of the vehicle have long been dominated by steel and, more recently, aluminum. Because of this, automakers rely heavily on welding and mechanical fasteners like bolts and screws to join metallic structures. Although generally robust, welded joints and fasteners can fail. They also do little to improve stiffness (without unduly increasing mass) or to mitigate noise/vibration/harshness (NVH) or crash energy passing through a vehicle. One way to meet these challenges is to reinforce BIW joints and cavities with composites coupled with structural adhesives.

An example of such a solution is a class of materials/technologies called composite body solutions (CBS). These include 3D structural inserts for reinforcing primary vehicle structures that combine elements of the BIW or other vehicle substructures, thermoplastic carriers (with continuous or discontinuous fiber reinforcement) and heat-activated, foaming structural adhesives. CBS elements are installed in the body shop portion early in vehicle build, before application of electrophoretic rust-prevention coating (E-coat).

CBS components are typically produced in a 2K/injection overmolding process where the carrier — incorporating welding tabs or snap-fits to temporarily join the CBS to metallic BIW components — is selectively overmolded with expandable adhesive and possibly an additional sealant (in a 3K process) for added functionality. The dry-to-the-touch uncured adhesive (based on custom epoxy chemistry) can be molded into complex shapes, yet permits E-coat coverage of metallic elements by maintaining a gap between composite and metal surfaces prior to heat-induced expansion during post-E-coat oven cure. As the foam expands, gaps are sealed between carrier and surrounding components, locking them together in a box-like “macro-structure” that improves mechanical properties, particularly under high and dynamic loads.

When incorporated early in vehicle design, CBS modules are mass- and cost-efficient options for increasing local and global BIW stiffness and improving passenger safety and comfort at lower mass. They also enable neutral or lower cost versus heavier, all-metallic solutions. Initially just used in automotive, a growing portfolio of carrier and adhesive materials has broadened CBS uses, highlights of which follow.

Between 1995 and 2004, CORE Products, a joint venture between L&L and Gurit Essex (Wattwil, Switzerland), was responsible for early application development and CBS manufacturing. L&L eventually acquired all assets of CORE, which now operates as L&L Products Europe.

L&L worked closely with its material suppliers during initial development and subsequent expansion of CBS technology. One such company, Lanxess AG (Cologne, Germany), has long provided composite carrier materials and materials characterization and simulation support to L&L in Europe.

What made CBS noteworthy was that it was among the first modular, mixed-material approaches, was easy to install, offered thermal and chemical stability for E-coat and didn’t change vehicle assembly sequencing, but improved performance at lower mass and neutral/lower cost — the auto industry’s holy grail.

“The design versatility of CBS technology helps simplify assembly in areas with complex or difficult-to-access conditions,” explains Núria Ignés, structural products engineering manager, L&L Products Reinforce at L&L Products EMEA (Altorf, France). “For example, using CBS technology on doors and other closures not only reduces weight and increases stiffness, but can simplify door manufacture if integrated early in the design process. Thanks to CAE tools and decades of experience, plus the combination of carrier and foam, which provides a robust attachment to the BIW once cured, we can use the right amount of the right material in the right place to balance stiffness with mass and cost or energy absorption with acoustics and cost.”

“A really interesting aspect of CBS technology is its ‘bio-mimetic’ nature,” adds Peter Cate, L&L global strategic marketing manager. “Just as the cellular-reinforcing struts in the center of bones are nature’s most mass-efficient method for adding stiffness and managing loads in hollow structures, once the adhesive expands, CBS units reinforce vehicle body cavities in the same manner, helping engineers optimize structural stiffness at the lowest mass.” 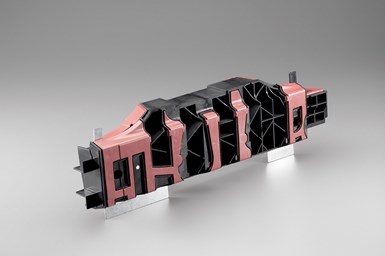 An early automotive application of CBS technology on the then PSA Group’s 2006 Citroën C4 Picasso sedans involved nine units to reinforce A- and B-pillars and the rear cross-member. The reinforcing elements cut 12 kilograms off vehicle weight while improving occupant safety. The black material is the Lanxess composite, the red is L&L’s epoxy foam and the silver is a portion of the metallic body structure to which the CBS element is attached.

Over the years, L&L and its suppliers have expanded CBS technology with new foam formulations, a broader range of carrier resins and reinforcements and by applying the concept to different structures.

For example, most CBS carriers for crash applications are engineered using heat-stabilized, 30 wt-% glass-reinforced PA6 because a balance between stiffness and ductility within a complex 3D shape is needed. Two such carriers were used on front longitudinal members for a major electric vehicle (EV) platform where, reportedly, they not only simplified assembly (reducing part count) but also reduced crash intrusion into the firewall by 20%. 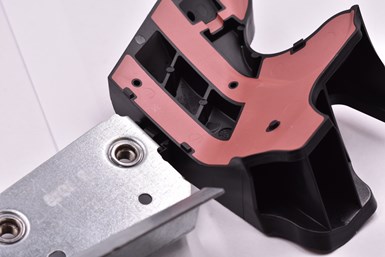 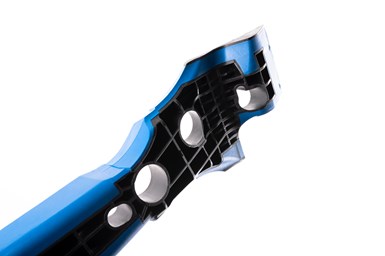 Other examples of CBS units on passenger cars include the upper D-ring in the vehicle rear end (top), used to improve the global stiffness as well as local stiffness of the gas-spring plate, and the B-pillar reinforcement (bottom) used to prevent buckling and metal failure while reducing mass and protecting occupants during side impact and roof crush events.

For higher impact requirements, hybrid carriers are now available, such as those reinforcing A-pillars on the largely aluminum-bodied 2019 Porsche 911 Carrera Cabriolet sports car from Porsche AG (Stuttgart, Germany). Being a convertible, stiffening the roofless frame was critical to protect passengers in case of rollovers. To keep vehicles light and nimble, Porsche replaced heavy tubular-steel rollbars with CBS inserts in the A-pillars. Pillar shells were produced in high-strength steel, which were stabilized and stiffened by CBS inserts inside each pillar. The main carrier body was compression-molded organosheet (47 vol-% twill-weave glass fabric/PA6), which was preheated, preformed, then injection overmolded with ribs (30 wt-% short-glass/PA6/6). The organosheet side carries L&L’s L-5235 expanding adhesive. Not only did this hybrid technology meet all performance and weight targets (which the tubular-steel option reportedly did not), but it reduced vehicle mass by 5.4 kilograms, easing assembly and reducing the vehicle’s center of gravity, which improved driving dynamics.

For applications where an oven process isn’t available to activate the expanding adhesive, or where additional support is needed in the paint shop, L&L says it’s working on other ambient-cure solutions. 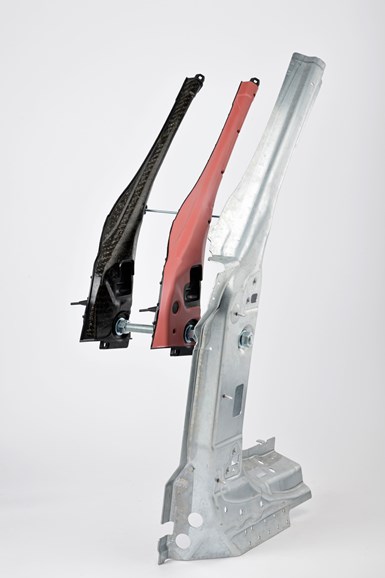 Honeycomb panel reinforcements feature lightweight epoxy — in paste form for manual application or low-viscosity liquid for automated pumping — that, once cured, can be machined or sanded. These are designed to stabilize honeycomb cores, predominantly in strategic locations in aircraft interiors, for example, without adding excess mass. Other uses include border enhancement (sealing/reinforcing composite panel edges), insert bonding and local reinforcement where metal hinges/inserts are installed in composite panels.

What the future holds

Since its first patent in 1999, L&L has filed numerous inventions for CBS technology. Given the broad range of carrier and adhesive options now available within this product family, it’s not surprising that applications have expanded beyond automotive into truck and aerospace. What’s next?

“Over the years, CBS products have evolved to serve new application requirements that combine functions,” adds Ignés. “For example, what started out as just a structural reinforcement has evolved to not just stiffen but also to improve acoustic functions or to increase energy absorption. Given the suite of highly desirable properties CBS technology offers, we expect not only to see automotive usage grow, but growth in other industries too.”