Across much of the manufacturing world, companies address intensifying market pressures by finding innovative ways to reduce production time and cost, while maximizing production throughput. An emerging outcome of this ever-growing “need for speed” is that high-performance composite industrial components are finding their way onto factory floors to rapidly move materials and unfinished products through the manufacturing process.

Such applications represent a departure from the more common industrial applications of composites: brackets, fixtures, ductwork, pallets, tanks and other manufacturing facility components that demand the corrosion resistance and durability of non-high-performance composite materials. In contrast to these relatively stationary applications,  high-performance composites applications demand a combination of light weight and vibrational damping to help manufacturers accelerate high-speed transfers, handling the rapid starts and stops of booms, gantries, shafts, beams and other moving components — all with a high degree of stability, accuracy and repeatability.

Interest in designing and producing long, rapidly moving machine components from high-performance composites has brought together two companies in the Czech Republic. The first, CompoTech (Sušice, Czech Republic), is a full-service composites design and manufacturing firm focused on advanced and hybrid filament winding applications. The company integrated into its filament winding systems a fiber filament placement technology that enables axial winding of 0-degree fibers, and CompoTech’s designs take advantage of added axial strength and stiffness afforded by this technology.

The second company is Bilsing Automation (Attendorn, Germany), a company focused on innovative modular tooling systems for numerous industries. Bilsing boasts a leading position in the development of industrial tooling made from carbon fiber-reinforced polymer (CFRP) composites, which it began incorporating into its tooling systems in 2006. Serendipitously, Bilsing’s manufacturing headquarters are in the Czech Republic near CompoTech’s facility. CompoTech supplies all Bilsing’s CFRP parts — specifically, carbon fiber/epoxy parts.

Many of the applications the two companies create involve the replacement of steel and/or aluminum machine components. For example, a 2019 CFRP project for a Bilsing industrial customer required a robot arm to move a 500-kilogram payload. This payload and the existing steel/aluminum tool together weighed 1,000 kilograms, but the biggest robot, from KUKA Robotics Corp. (Augsburg, Germany), can handle a maximum of 650 kilograms. An all-aluminum replacement was still too heavy, creating a payload/tool mass of 700 kilograms. “So no other solution but CFRP could work,” Pošvář reports. The CFRP tooling reduced the total mass to 640 kilograms, making the robot application feasible.

Recent manufacturing and design advancements have improved the performance of CFRP T-booms in terms of critical functional characteristics — vibration, deflection and distortion being chief among them.

“CFRP is a little more expensive than metal components,” notes Thomas Garant, general manager of Bilsing Automation North America, “but we’ve proven with the assistance of customers that assembling a successful business case justifies this. CFRP also provides a lighter as well as a more robust solution that also lengthens the life of automation equipment. The strength, stiffness and light weight of the CFRP components (10% stiffer, 40% lighter) allows them to pick up heavier payloads and maintain if not increase production output.”

Pošvář adds, “In some cases, CFRP enables customers to buy a smaller robot or machine, which saves a lot of money.”

One CFRP component that CompoTech has been supplying to Bilsing since 2006 is the T-boom, a T-shaped beam with a square profile. The T-boom is a common component of automation equipment historically made from steel and/or aluminum. It is used to transfer components from one manufacturing step to another (for example, from a press to a punch cutter). The T-boom connects to machinery at the stem of the T and uses the arms to move materials or unfinished parts. Recent manufacturing and design advancements have improved the performance of CFRP T-booms in terms of critical functional characteristics — vibration, deflection and distortion being chief among them.

Vibration is the nemesis of many automated manufacturing machines. It tends to set manufacturing quality and speed against each other: waiting for vibrations to die down increases machine accuracy, but slows the production cycle. Conversely, faster machine operation compromises machine accuracy, and oftentimes, the quality of the finished product. Alternatively, if the components of a machine can be made to vibrate less, this enables the manufacturer to increase machine speed while maintaining (or improving) product quality.

T boom design. Composite T boom replaces steel and/or aluminum T booms, which are commonly used transfer components in industrial automation systems. The stem of the T connects to the robot or other transfer machinery, and the arms support the load to be transferred. Attachments like the ones shown here provide vacuum or other mechanisms to hold and release the part being transferred. Source | Bilsing Automation

In addition to preventing resonance, a composite machine component can also damp the vibrations that occur. The composite materials themselves have better damping performance than metals. Additionally, CompoTech designs incorporate other materials that are effective at damping (such as rubber) into the CFRP structures. The result is a part that offers damping performance 12 to 20 times better than that provided by steel.

Helping to minimize deflection of the component under loads, placement of fibers along the longitudinal (0-degree) axis helps to optimize bending performance. Unlike filament-wound fibers, axial fibers do not bend around the component’s profile; the straight 0-degree fibers thus lend maximal mechanical characteristics to the finished beam. In fact, CompoTech estimates that its combined filament winding and axial fiber placement technology produces beams 10 to 15% stiffer in the axial direction, with 50% greater bending strength, compared to conventional filament-wound beams.

Reducing vibration, deflection and distortion in industrial machinery contributes to improved performance both of the component itself and of the machinery with which it is working.

Geometric distortion can also negatively affect the performance of T-booms and similar components, which often operate in settings where wide temperature fluctuations are common, both from ambient temperature changes and from machine-generated heat. Because of this, the coefficient of thermal expansion (CTE) of machine components becomes critical: along the length of these components, distortion due to thermal expansion/contraction may be significant enough to compromise accuracy and stability. CompoTech designs account for CTE with a strategic combination of both polyacrylonitrile (PAN) and pitch carbon fibers. The composite can be designed to create a machine component with zero CTE axially and/or radially (e.g., spindles), making thermal distortion and its impact on production negligible.

Reducing vibration, deflection and distortion in industrial machinery contributes to improved performance both of the component itself and of the machinery with which it is working, points out CompoTech business development director Humphrey Carter. “When the transfer component can be inserted into a smaller opening in a press, for example, this cuts the time and energy required to open it wider prior to transfer.” Though the decreased time and energy may be small for each individual transfer, the savings accumulate rapidly when the press is making hundreds of parts each day.

Vibration and deflection reductions compared to metal T-booms represent a benefit of any CFRP T-boom, but CompoTech’s latest design innovations are improving vibration and deflection performance even more. One could characterize the CompoTech innovation approach as “manufacture for design.” Carter explains, “We develop the process technology bespoke to the design criteria and can make this available for our technology partners as well as composite designers and producers.” One of the first examples of this approach is CompoTech’s inclusion of high-modulus pitch fibers in the T-boom design. Strategically placed pitch fiber reinforcement in the T-boom enables CompoTech to offer optimized stiffness. But fine-tuning of the fiber placement and winding system is required to work with pitch fiber, which breaks more easily than PAN fiber. CompoTech has made the manufacturing advancements necessary to make this design option feasible.

The design of the beam profile’s corner pieces is the most significant upgrade in the current T-boom design. In the older design, cylindrical openings in the beam’s corner structure run the length of the beam. A metal rod is placed inside these corner structures at the points at which Bilsing affixes attachments, providing the strength needed at those points for bonding or bolting. These attachments may also require a metal plate (with its attendant weight penalty) to be placed on the outside of the beam to provide adequate strength at the attachment point.

The new design incorporates pentagonal openings in the corners, again running the length of the beam. These corner configurations are produced individually by winding on separate mandrels. They are then placed in the main body tooling and the fiber placement and winding of the square beam section is performed. Once complete, the beam goes into a press.

New corner design. Compared to previous cylindrical corner elements, pentagonal corner design (visible here at the end of the beam) has reduced weight and increased stiffness of the beam, both of which improve beam performance. Source | Bilsing Automation/CompoTech 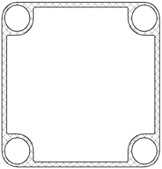 “It is the functionality of the corners and the tolerance achieved with the pressing that allows efficient joining by fixing bolts and supports without a large amount of surface prep or secondary bonding,” Carter says of the new design. The new pentagonal corners have proven beneficial: testing has shown a 20% improvement in torsional stiffness and as much as 85% in long bending stiffness, and an 8% reduction in total beam/fastener weight compared to the cylindrical elements in the old beam profile. 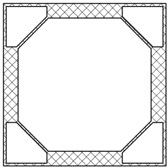 Also advancing the state of the art is an innovative joining technology to connect the stem and arms of the T-boom. To achieve the same joint strength as a steel weld, previous designs would laminate over the joint, which adds a manufacturing step and increases cost. The Bilsing-CompoTech approach first joins the elements with an adhesive and then reinforces it with steel bolts through the corner elements discussed above.

CompoTech builds each T-boom according to Bilsing’s needs (which in turn are determined by Bilsing’s manufacturing customers), resulting in a range of T-boom specifications. T-boom stems are typically 700 millimeters long, while the beam making up the arms extends 1.6 to 2 meters. Wall thickness varies by the demands of the application but is typically about 10 millimeters. Fiber volume is 50-60%.

Robust attachments. The new pentagonal corner design that runs the length of the beam, along with the tolerance that pressing achieves in the beam’s shape, handles attachments more efficiently than the previous design. The new design requires little surface preparation or secondary bonding for the attachments. Source | Bilsing Automation

Bilsing’s carbon fiber product line is a growing sector of the company’s business, and the lightweight, stiff, low-vibration components are also expanding the range of motion feasible in T-booms. Recent machine innovations incorporate swiveling, rocking and rotational movement that enables the transfer of components to maneuver around other equipment along the most efficient path possible. Such innovations add to the productivity levels possible with CFRP T-booms, and therefore, to the attractiveness of CFRP as an industrial machinery material of choice in an expanding array of applications.