“Speed with fuel economy and ‘ride’ are most valued,” sums up Jim Gardiner, general manager of Compmillennia (Washington, N.C., U.S.), about some of his offshore boating customers’ desires. When most boat designers discuss these three characteristics, it is in the context of tradeoffs and compromises — sacrificing fuel economy for speed, for example, or speed for ride comfort. So when Gardiner set out to achieve high speeds, great fuel efficiency and an outstanding ride experience, all in one boat, he knew that creative innovation would be mandatory. Composites technology proved essential to Gardiner’s success.

The result is the Compmillennia LIGHTSPEED Model 1188 catamaran, a 39-foot center console designed for offshore fishing parties of six or eight anglers, or excursions with up to 16 family members and friends. The boat’s unusually wide beam — 12 feet for the first in the series and now up to 14 feet — provides excellent stability as well as plenty of room for people and gear. With just two 300-horsepower engines, the double-hulled 1188 offers a top speed of more than  60 miles per hour, nearly matching the top speed of large V-bottom center console boats equipped with triple or quad 300-horsepower engines. “Larger V-bottoms need a lot of engine horsepower to push their length through the water,” Gardiner notes, “and more horsepower equals more weight, more cost, larger vehicles to tow and more fuel.”

To achieve the trifecta of speed, efficiency and comfort, Gardiner began his design of the LIGHTSPEED 1188 from “a clean sheet of paper,” he says, which enabled him to avoid the constraints of “a pure production mentality and fixed tooling.” He noticed that in production catamarans, for example, the cockpit is often a separate “tub” with deck sole and hull side liner, a design Gardiner labels “a cup-in-a-bowl structure.” To lighten the 1188’s structure, Gardiner made the cockpit a more integral component of the vessel, borrowing design elements from large ocean-sailing racing catamarans. The hulls in these racing cats are joined by two transverse beams, with a “deck” created simply by stretching high-strength netting material from hull to hull. Gardiner says he replicated the non-racing aspects of this structure “by using the aft and forward bulkheads as the primary transverse structure, allowing the composite deck between to be quite light.”

Besides the elimination of redundant structural components found in traditional cockpit designs, light weight is especially evident in the design of the 1188’s 8-by-12-foot overhead T top canopy. This element may carry only electronics and lighting, but it is designed with the structural fortitude needed to provide an upper deck for an optional second steering station. “On other large center console fishing catamarans of this type, that part may weigh as much as 1,000 pounds including support by a substantial welded aluminum pipe frame bolted to the boat,” Gardiner explains. The LIGHTSPEED 1188, on the other hand, uses an optimized carbon fiber laminate and weighs less than 200 pounds and is bonded not bolted.

Catamaran clearance. The LIGHTSPEED 1188’s tunnel design ensures plenty of clearance at rest. Its geometry was optimized only after the boat’s weight was determined. Source | Compmillennia

With weight being so central to the LIGHTSPEED 1188’s design, Gardiner made it the fixed point toward which he tailored the other design elements. That is, he calculated what the boat would weigh based on its structural elements and outfitting, then factored this weight in as he optimized other parameters of the design. For example, Gardiner designed the geometry of the tunnel between the two hulls only after the boat’s weight was established — not a simple task, given his goal of preventing water slapping by providing a minimum 12-inch clearance above the surface of the sea at the transom at rest.

At 8,500 pounds (compared to 13,000 pounds for conventional designs), the LIGHTSPEED 1188’s light weight helps decrease water displacement, which improves fuel economy. Gardiner notes that fuel economy is roughly proportional to the boat’s gross weight. But weight is only one factor in fuel consumption; also essential to the 1188’s fuel efficiency is its single-step hull design. In the stepped hull, a structural “notch” is positioned high enough on the either side of the hull to reach above the water line when the boat is cruising. Aft of the notch, the bottom of the hull is slightly higher than it is forward of the notch. The step creates a low-pressure area that sucks air under the boat through the side notches. With more of the hull lifted out of the water, the boat experiences less drag and greater efficiency — as much as 15% greater, according to boats.com.

The final result of Compmillennia’s efforts to maximize fuel economy? The LIGHTSPEED 1188’s cruising fuel consumption of 1.5 miles per gallon represents a 50% gain over the 1 mile per gallon typical of other similarly sized fishing boats able to achieve similar top speeds.

Modified for quad engines. A recent LIGHTSPEED 1188 features a 14-foot beam and hulls wide enough to accommodate two engines each. This model has reached a top speed of 95 mph. Photo | Todd Liebel

As advantageous as a stepped hull is, it adds significantly to the complexity of the hull design — but nothing Gardiner hadn’t dealt with before. His decades-long career as a boat designer and builder made the design work less about computer analysis and more about experience-based design decisions. Illustrating this experience, Gardiner recalls, “For 13 years I built a line of lightweight 18-foot fishing skiffs, one per week. This allowed weekly opportunities to experiment with materials and lamination schedules. It was ‘seat of the pants’ testing; each week, I would take a different employee on each sea trial. Regardless that each boat was built from the same molds, I learned to identify the resin, reinforcing materials and core used in a completed boat just from the ride.”

Describing the LIGHTSPEED 1188’s design process, Gardiner continues, “The design was drafted with pencil and paper, ducks, splines and ship’s curves. Buoyancy calculations were performed and a weights-and-moments study performed. From this, modifications were made to the design so that the center of gravity was in the right location and the design ‘looked right.’” Only after Compmillennia had built the boat’s mold was the design entered into Autodesk (San Rafael, Calif., U.S.) AutoCAD “to memorialize the ‘as-built’ and make a baseline to further production planning and modifications,” he says.

Gardiner believes that a single stepped hull is more efficient than the multiple step hulls more generally seen. Gardiner also addressed trim (running angle), stability and comfort with several design elements. The fuel tank is located at the boat’s center of gravity so that the boat’s trim does not change as the 425 gallons of fuel capacity is burned off. This also helps with fuel efficiency. The hull laminate, a foam sandwich design using glass- and aramid-reinforced vinyl ester, contributes to ride comfort with its ability to absorb energy. In general, the 1188 employs carbon fiber composites for their stiffness and light weight in the canopy and along load paths such as the forward and aft bulkheads, with glass and aramid fiber composites used everywhere else.

Like many composite laminate designs, the 1188’s design is weight-optimized both because of composite materials’ high strength-to-weight ratio and because of their tailorability. The design keeps the laminate thin where it can — typically one or two plies of biaxial, triaxial or quadraxial nonwoven fabrics and some unidirectionals — and incorporates more laminate in areas needing protection against impact damage from debris in the water or docking, and to strengthen resting points when the boat is berthed on a lift.

Gardiner’s first task in bringing his design to fruition was building cost-efficient molds. Production tooling for 40-foot center console catamarans can cost about $1 million. “As a small composite fabricator introducing a new design to the market,” he says, “that would have been an enormous investment.” Gardiner chose a different option. “I believed it would be a cost benefit for us to build a plywood hull mold covered with high-pressure laminate as a mold finish,” he says. By the end of 2019, Compmillennia will begin building its ninth 1188 hull on these molds, so they have paid for themselves several times over. The company made the rest of the boat’s composite components — cockpit sole, decks, console — on its 20-foot by 80-foot flat vacuum mold, which produces panel surfaces with a near production quality gel coat finish. 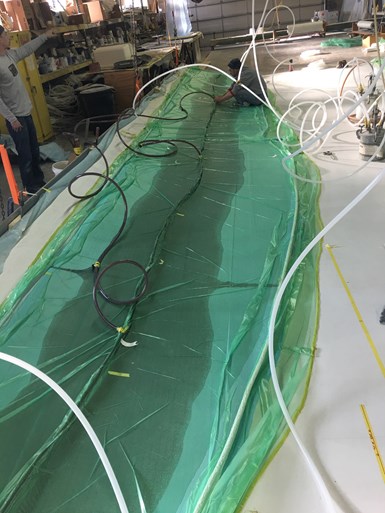 For the matrix, Gardiner chose Interplastic Corp. (St. Paul, Minn., U.S.) CORVE8175-60 resin, a high-elongation infusion vinyl ester. Compatibility of vinyl esters with gel coat was a deciding factor. This specific vinyl ester provides good cosmetics with fabric reinforcements, good adhesion to a variety of fiber types, and elongation sufficient to ensure that loads are carried by the reinforcement, not the matrix. Wetting out the fiber is accomplished using equipment from Magnum Venus Products (Knoxville, Tenn., U.S.) and an impregnator from Gougeon Brothers (Bay City, Mich., U.S.).

Sandwich panels are constructed using several weights of Diab (Laholm, Sweden) Divinycell H or HM foam core. “Higher densities are used in high-load areas such as the keel area and transom that the engines mount to,” Gardiner reports.

Judicious carbon reinforcement. With most of the boat’s structure taking advantage of the energy absorption offered by glass fiber- and aramid-reinforced composites, the Compmillennia cat incorporates carbon fiber reinforcement where added stiffness and strength is desired. Shown here is the boat’s cockpit sole. Source | Compmillennia

Compmillennia recently completed the seventh boat in the LIGHTSPEED 1188 series. Design and build aspects have progressed with each new boat in the series, Gardiner reports. Structural modifications have included increased deadrise forward (that is, a more pronounced V shape in the forward hulls), optimized transom angle, and chine and strake detailing. Gardiner has also worked on further optimizing the laminate and aerodynamics.  As the design is tailored to each new customer, keeping the fore and aft center of gravity within a small window (plus or minus 2.5%) is tantamount, both for trim and for ride comfort.

Fisherman’s dream. The LIGHTSPEED 1188 catamaran has attracted boaters looking for speed and fuel economy along with a comfortable ride for their offshore fishing excursions. Photo | Todd Liebel

While the first LIGHTSPEED 1188 was limited to a 12-foot beam to meet trailering rules on U.S. roads, later renditions not meant to be trailered have become progressively wider, Gardiner says. Most recently, Compmillennia has introduced a quad engine version of the 1188. The dual hulls on this boat are wider so that each hull can accommodate side-by-side engines, with a resulting beam overall of 14 feet. “The near-15% increase in cockpit is highly valued, with a small cost in increased weight,” Gardiner adds. This 1188, outfitted with four 400-horsepower engines, achieved an impressive top speed of 95 mph during its first sea trial.