The high-pressure compressed air tanks that firefighters carry on their backs when fighting fires have gotten lighter over the years with the use of composite materials, but are still typically heavy, at about 27 kilograms (more than 59 pounds) on average, according to carbon nanotube producer OCSiAl (Leudelange, Luxembourg and Columbus, Ohio, U.S.). Using OCSiAl’s TUBALL single wall carbon nanotubes (also known as graphene nanotubes), composite tank company Techplast (Wieprz, Poland) has developed a tank that is said to weigh less than 2.8 kilograms (6.1 pounds).

The 6.8-liter tank comprises three layers: a PET liner, a carbon fiber/epoxy tank enhanced with the TUBALL nanomaterials within the epoxy matrix and an outer epoxy coating.

“Graphene nanotubes introduced in composite reinforcement bring improvements in interlaminar shear strength (ILSS) leading to an increase in burst pressure level by up to 30%, according to the results of cylinder impact tests,” says Piotr Saferna, R&D leader of Techplast. “This incredible improvement in impact resistance has allowed us to reduce the weight of the cylinder while maintaining the mechanical properties, which results in the lightest 6.8-liter cylinder in the world for 300 bars of working pressure. The total mass of our SAFERnano cylinder, including all protective attachments and coatings, is less than 2.8 kilograms. This new generation of cylinders achieves a weight reduction of up to 75% compared with competing solutions, and of 15% compared with our previous generation of products.” 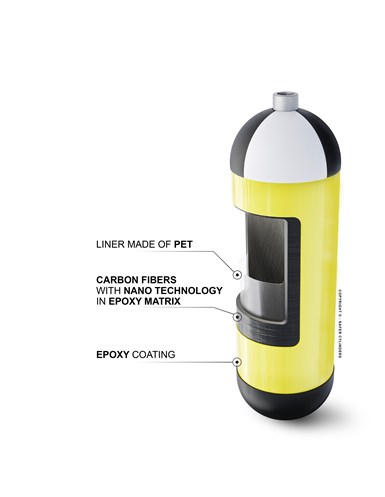 According to OCSiAl, the R&D team at Techplast worked for three years to create the SAFERnano composite cylinder, which is currently available globally and recently achieved TÜV certification, confirming full compliance with international safety standards for storage of various gases, including air, oxygen, nitrogen and carbon dioxide.

In addition to the current applications in the fire rescue and emergency industry, higher-capacity SAFERnano cylinders up to 350 liters show potential for storage in hydrogen fuel cell automotive vehicles.