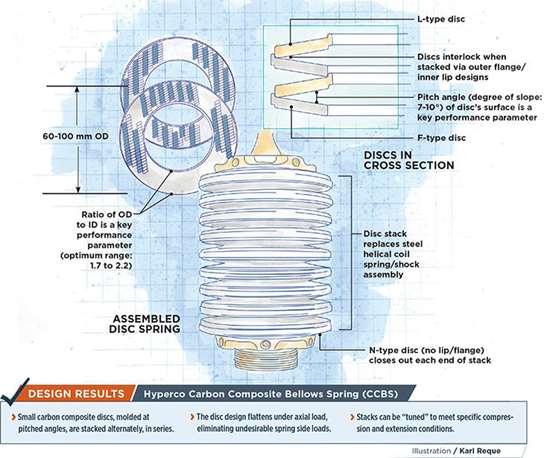 Greater control of a key spring variable: Hyperco’s CCBS discs are molded in the style of Belleville washers, and are available in a variety of sizes capable of producing a variety of spring rates. Source: Hyperco

Greater design freedom and market potential: The CCBS disc springs are adaptable to, and “tunable” for desired performance in, a variety of aerospace, industrial and recreational applications, including motorcycles. Source: Hyperco

Helical coil springs are a mainstay in today’s automotive suspensions, with a basic design essentially unchanged since their advent. MW Industries (Rosemont, IL, US) is the largest US spring manufacturer/supplier and the largest supplier of high-performance springs to motorsports through its Hyperco division (Pontotoc, MS, US). The company stays abreast of new materials and, therefore, began investigating carbon fiber composites for high-performance springs several years ago, recalls Mark Campbell, corporate head of new product development: “We actually invited some composites specialists to come in and partner with us on designs.” That collaboration resulted in a helical all-carbon composite spring design that seemed reasonable, says Campbell, but did not perform as expected, because “carbon does not perform well when placed in torsion.”

Further experiments included carbon composite “bump stops,” suspension components designed to prevent metal-on-metal contact under extreme compression for NASCAR racing teams. Although these were ultimately banned by the racing body, the bump stop’s compressible components led Campbell and Hyperco to an “ah-ha” moment, the fruit of which are lightweight disc springs, sold under the Carbon Composite Bellows Spring (CCBS) trademark.

Hyperco’s CCBS incorporates a type of “Belleville washer,” an industrial widget with a long and storied history. Invented in the mid-1800s by industrialist Julian Belleville, the truncated-cone-shaped steel washers could resist high loads in a small space, providing high spring force over a very short distance as well as high-energy storage capacity. Commonly used in industrial valve assemblies, the washers ultimately proved invaluable in warfare, particularly as return springs in large-caliber artillery. In fact, Belleville washer designs used by the U.S. military were classified until the 1970s.

Campbell’s team believed that, given the success of the bump stops and the history of Belleville washers, a composite disc spring was achievable. By stacking multiple carbon composite discs (see drawing, at left), it seemed possible to achieve spring performance equivalent to a helical spring, or to steel disc springs, but at a weight reduction of as much as 60%. Stacked discs would be especially appropriate for race cars, which typically weigh less than passenger cars and, therefore, require less spring stroke length but need stiff springs for high-speed control.

Despite the history and possibilities, data were scarce. “The mathematical equations of how Bellevilles work are hard to come by, with no design formulas,” asserts Campbell. “We had to develop our own equations for the shape and size of the composite versions, for the spring characteristics we wanted. It has taken a huge amount of time and testing.”

The team had to consider many variables in search of optimum values for the overall disc diameter, the ratio of disc outer diameter (OD) to inside diameter (ID), the disc’s laminate thickness and the pitch angle (degree of slope) of the disc’s upper surface.

The team also needed a means of mechanically interlocking adjacent discs, when stacked. Further, a disc spring made with carbon composites would take advantage of carbon fiber’s high tensile properties in bending but had not been tried for high-frequency cyclic loading typical of an automotive suspension (between 0.3 to 33 Hz).

What was obvious, says Campbell, is that the design would eliminate a major disadvantage of the coil spring, which “when axially loaded, always produces undesirable torsional side loads, and when installed in a coil-over spring/shock assembly, these side loads create significant friction on the shock shaft bearing and seal.” This phenomenon, referred to as stiction (from static and friction), adversely affects the shock action, and puts stress on the car’s suspension that can lead to handling problems. The composite discs, by comparison, would generate no side loads, since they simply flatten out under axial load.

Friction is a problem, however, in the key disc-spring variable of spring rate, the amount of load required to deflect a spring one inch. The disc design needed to deliver consistent spring rates, from part to part. Here, Hyperco had to investigate the spring phenomenon known as hysteresis. The term refers to the fact that when load is applied to the spring, causing it to compress a certain distance (e.g., 10 mm), that load (in kilograms) is greater than the load measured during extension (springback) or unloading of the spring, for the same measured deflection, says team member and carbon composite program manager Greg Hazard. As a result, the suspension unit does not move as freely as it should. Spring manufacturers work hard to reduce hysteresis — that is, to ensure that the deflection value is the same during compression and extension, and, thus, contribute to a more predictable, controllable suspension system that reacts faster and more precisely to imperfections in the road surface.

“In a disc spring,” says Hazard, “hysteresis is caused by the friction at the mating surface of two adjacent discs.” That friction adds load to the spring during compression, but reduces load during extension. Hyperco believed it could use the molding process to vary the shape of the disc contact region to manipulate the friction to damp suspension load energy for some application requirements. Hazard says, “Hysteresis exists, and we might as well be able to use it as a tuning tool to the driver’s advantage.”

Hyperco had the advantage of proprietary and established in-house spring development programs and testing equipment. Says Hazard, “We knew the characteristics we wanted to achieve, so we built and tested our designs in a trial-and-error process, and used that data to adjust the mathematical formulas, then went back to producing more prototypes, in an iterative fashion.”

Disc iterations were compression molded from woven carbon/epoxy prepreg supplied by TCR Composites Inc. (Ogden, UT, US), prepregged Qiso slit braid from A&P Technology Inc. (Cincinnati, OH, US) and materials from other suppliers. Three basic disc designs were molded: F-type discs have a small outer flange; L-types have a lip that centers the mating F-type flange (see drawing at left); and N-types have no flange or lip, and are used as the last disc in a stack, to provide a solid carbon surface on the spring perch. “The layup varies,” Campbell says, explaining, “We’ve created ‘families’ of disc sizes, and can create different spring rates by varying disc thickness and fiber orientations.” Hyperco is working on establishing design standards for the discs, to make information available for CAD software programs and to raise awareness of the technology for engineers.

The data show that pitch angles between 7° and 10° are possible, depending on the application, and allow an appropriate degree of deflection and spring rate at desired loads. Further, the optimum window for OD/ID ratio ranges from 1.7 to 2.2, “to optimize the amount of storable energy vs. the design envelope,” that is, the chassis space available for spring installation, says Hazard.

Hyperco’s refined in-house molding processes now yield discs consistently within ±2% of the designated disc spring’s spring rate, and Campbell points out that the carbon composite offers better repeatable rate change during spring compression than steel. Hazard adds that it is possible to design in some friction between discs to achieve damping for energy control, perhaps not for motorsports, but for other industry applications for which the company has begun testing.

The beauty of the CCBS for motorsports, explains Campbell, is that racers can “tune” disc stacks, with higher or lower spring rates, to match track conditions. “Although our standard size range is optimum, we can also produce custom sizes for specific needs,” adds Hazard. A number of amateur racers, among them Sports Car Club of America (SCCA) national champion Chris Farrell (see top two photos at left) have adopted the CCBS, with great success. Although it costs more than a metal coil spring, its “tunability” is appealing. When racers factor in several different sets of steel springs for different tracks/conditions, the price-per-rate cost is competitive. Unfortunately, US pro racing organizations, including NASCAR, IndyCar, IMSA and NHRA, have ruled out carbon disc springs, for now. But Campbell contends, “As with any new technology, acceptance takes time and we believe … they will allow it in the future.”

“Lightweighting in automotive is a huge issue now,” concludes Hazard, “and no one else is approaching the issue of lighter springs like we are.”

Hyperco’s Mark Campbell unveiled the CCBS “Bellows Spring” at CW’s Carbon Fiber 2013. Read about it online in the "Carbon Fiber 2013 Conference Report" by clicking on it's title under "Editor's Picks" at top right.