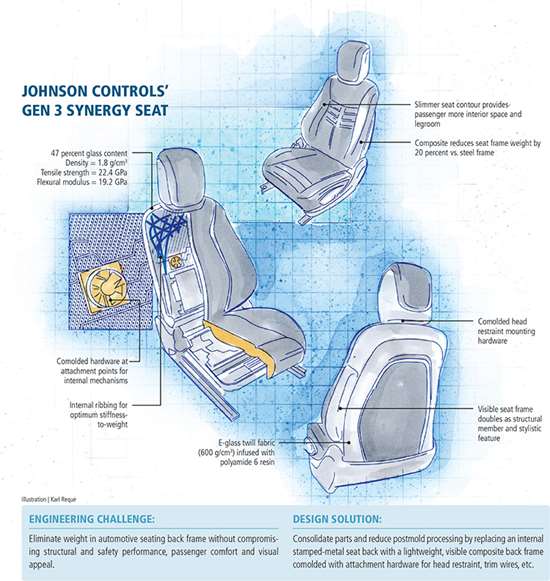 This back view of Johnson Controls’ (Plymouth, Mich.) Gen 3 Synergy Seat shows its external, contoured fiber-reinforced thermoplastic seat back frame. In commercial production, seat frames will be molded from Bond-Laminate’s OrganoSheet, a laminate comprising E-glass twill fabric and polyamide 6 resin. Replacement of a conventional steel seat frame with a composite frame enables designers to integrate parts used for secondary attachments and use the frame as an aesthetic element. Source: Johnson Controls

Johnson Controls recently installed a crash test sled at its engineering and design facility in Plymouth, Mich. The sled will enable engineers to conduct and coordinate various dynamic load tests on the Gen 3 Synergy Seat that are required by the U.S. government and auto OEMs prior to commercial production. Source: CT/Photo: Michael LeGault

Cut-away views of the Gen 3 seat show the inner portion of the composite seat back frame and illustrate other features incorporated into the seat, including its Vibratec double-layer foam seat cushion and breathable fabrics. Source: Johnson Controls

Consolidate parts and reduce postmold processing by replacing an internal stamped-metal seat back with a lightweight, visible composite back frame comolded with attachment hardware for head restraint, trim wires, etc.

ith few exceptions, composites in high-volume commercial passenger vehicles were limited, early on, to high-temperature intake manifolds, oil pans and other powertrain parts. More recently, they’ve seen use in doors and other interior components. Johnson Controls, Automotive Seating (Plymouth, Mich.), however, is angling for an industry first by extending them to passenger car seating systems.

The company’s new “smart seating” concept, the Gen 3 Synergy Seat, made its debut in a big way in 2013, appearing first at the North American International Auto Show (Jan. 19-27, in Detroit, Mich.), then the Shanghai International Automobile Industry Exhibition (SHIAS), April 20-29, and the Internationale Automobil-Ausstellung show (Sept. 12-22, 2013) in Frankfurt-am-Main, Germany. Targeted to the upper end of the passenger car market, the seat features a fiber-reinforced plastic back frame in place of the conventional stamped-steel frame.

The Gen 3’s back frame is about 20 percent lighter than a typical steel back frame. That’s significant because back frames are an ideal target for weight savings. “In the interior, you look at what’s driving weight, and seats are at the top of the list,” says Tom Gould, design director, Johnson Controls, noting that a primary reason for this is that there are many parts and standalone structures within the seat.

Gould, however, sees composites in seating systems as a real game changer because they give engineers an opportunity to make revolutionary design changes. In a conventional seat, the steel seat back is buried under layers of fabric and foam. Its function is strictly structural. But the Gen 3 Synergy Seat’s composite seat back is a visible, aesthetic component. Its function is both structural and stylistic.

“This is where the composite seat story becomes very interesting, because you can do things with composites you can’t do with other materials,” Gould contends. An exterior back frame offers fresh opportunities to improve seat packaging efficiency by reducing the number of parts and different materials used and, thus, streamline the manufacturing process.

Nick Petouhoff, Johnson Controls’ director of engineering, says the visible seat back also presents opportunities for “offsets,” that is, features that help to nominally balance the higher cost of the composite. Mindful that offsets would be crucial to customer acceptance, the seat’s design team strove to incorporate as many as possible.

In a seat with a metal back frame, a number of secondary attachments affix the head restraint, lumber support, a motor for adjusting the seat and trim wires that attach foam or trim coverings, says Petouhoff.  “With the Gen 3 seat, we are able to incorporate many of these parts and features in the tool used to mold the seat back.”

As an added benefit, fewer parts and less material permit a slimmer contour, providing passengers with greater interior space and legroom. As a stylistic element, the composite can be decorated in a variety of colors and textures, using either thin films, paint or fabric. The seat back frames for the demonstrator seats were in-mold decorated with a white thin film.

Johnson Controls’ interest in composites and innovative seat design preceded the Gen 3 Seat program. An international team of engineers at the company took a blank-slate approach to automotive seating several years ago in a project called “the redefinition seat.” Its goal was design solutions that redefine ways occupant movement can be constrained during a crash yet also reduce mass. “Rather than just saying, ‘let’s substitute one material for another,’ we took a more aggressive approach and looked at the very design principles of seating to see how we might start over,” says Kurt Siebold, senior manager, new technologies.

The project’s prototype seat cushion pan and seat back frame (carbon fiber composites) had new features that could enhance safety and reduce part count and mass. For example, the tube-like front edge of the cushion pan, during a crash, acts as a passenger restraint, distributing the load of thighs and posterior as they thrust forward. “If you can find ways to mitigate moments of force in the design, you can create lighter seat mechanisms and structure,” says Siebold.

Design protocols for the Gen 3 seat were similarly established, using a holistic approach and an interdisciplinary project team that began by gathering information on the latest trends in consumer research, market data, customer feedback and benchmarking. It then defined the requirements of the seat’s three stakeholders — consumers, society and OEMs — emphasizing within the design the objectives of safety, comfort and functional ergonomics. Drawing on inhouse seat-design expertise, alternative metals, mechanisms, foam, trim, fabrics and composites were evaluated. The overall goal was a seat design that reduced mass and complexity.

Jeff Lindberg, Johnson Controls’ chief engineer, automotive seating, says that the Gen 3 seat is beyond the prototype phase and that the first demonstrator seats were built on production tooling to show customers that the design principles would work in a complete auto interior/seating context. Lindberg declined to reveal the exact thickness and other dimensions of the composite seat back for the demonstrator seats, noting that these parameters ultimately will be vehicle-specific. “Dimensions and thicknesses … are dependent on the vehicle/seat packaging dimensions and requirements, as well as how much content will be packaged into the seat,” Lindberg explains. “The degree to which the seat back frame could be made smaller, thinner or lighter will depend on the actual application.” Lindberg reports that taking into account the potential for greater shape complexity and part integration, a 15 to 20 percent weight reduction for the composite back frame is expected.

The seat backs for the demonstrators were made from polyamide-infused carbon fiber, to enhance durability during transport, handling and display in trade-show settings. In production, Johnson Controls plans to mold back frames from Bond-Laminate GmbH’s (Brilon, Germany) OrganoSheet, comprising that company’s trademarked TEPEX dynalite 102-RG600 E-glass roving twill fabric, with an areal weight of 600 g/m2 and a polyamide 6 (PA 6) matrix.

In production, the glass roving is heated and preformed in a mold at a temperature in the range between 240°F and 260°F (115°C and 127°C). The preferred heating method is mid-wavelength infrared (IR), but contact heating in the mold may be used with a release film. Next, the formed sheet is placed in the production mold — tools can be either aluminum or steel — mounted in an injection/compression machine at JCI’s facility in Burscheid, Germany, and infused with PA 6. Tool temperature is maintained between 195°F and 230°F (90°C to 110°C). The consolidated laminate is approximately 47 percent glass, with a density of 1.8 g/cm3, a longitudinal tensile strength of 22.4 GPa and a flexural modulus of 19.2 GPa.

The seat back must meet government-mandated structural and dynamic loading thresholds, which correlate in the lab, respectively, to a high-strength static test and a high-energy impact test. The company recently installed a test crash sled at its R&D facility in Plymouth to conduct trials (see photo above).

Petouhoff reports that the strengths of the composite and steel seat backs are comparable, but he points out that one challenge of working with composites is that the performance properties of a given laminate can vary with the operational temperature in an auto interior, which can range from -22°F to 176°F (-30°C to 80°C). The properties of steel, on the other hand, are relatively constant in this range. Rigorous field testing of Gen 3 seat systems will be necessary to validate the composite’s performance under this wide range of environmental conditions, he says.

The frame’s exterior position and open contour enabled designers to draw a pleasing contrast between the light-colored frame and darker interior zones of the seat. Further, there is a deliberate play on the contrast between convex and concave surfaces that has the effect of visibly reducing volume, making the seat appear lighter. Beyond composites, the Gen 3 seat system also incorporates other innovations. The seat’s breathable Dri-FIT fabrics, for example, wick moisture away from the passenger’s body. And its VariTec foam seating system’s dual horizontal foam layers, with varying levels of hardness, ensure comfort on long drives.

Johnson Controls is now carrying out codevelopment work on the Gen 3 Synergy seat with a number of automotive OEMs toward the goal of full commercialization. “There’s definitely excitement about the use of composites in seats and automotive interiors,” says Gould. “The industry just needs to understand how they will impact mass of the vehicle and, at the end of the day, the cost.