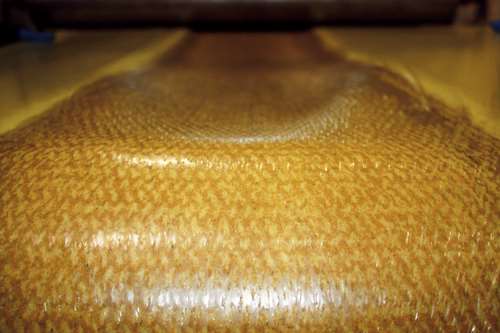 A close-up view of a bio-filled SMC material. Source: NCC

A close-up view of a bio-filled SMC material. Source: NCC

A close-up of the surface of a cured test plaque produced on a specialized compression molding press. This trial item was formed from SMC with a soy-based filler in place of conventional calcium carbonate. Source: NCC

A close-up of the surface of a cured test plaque produced on a specialized compression molding press. This trial item was formed from SMC with a soy-based filler in place of conventional calcium carbonate. Source: NCC

Sheet molding compound (SMC) has long had a home in a variety of automotive composites applications — to the tune of about 325 million lb (about 147,420 metric tonnes) per year in the U.S. alone. Applications include exterior body panels, including front and rear fenders, hoods, doors and decklids, as well as trunk floor/spare tire wells and other secondary support structures.

A perennial issue with SMC, however, has been its weight efficiency. Conventional formulations in use today range in specific density from 1.5 to 1.9 or more. There are a number of efforts underway to drastically reduce SMC’s specific gravity, and thereby, its mass, through the use of bio-based materials.

The Bio-Lite Technical Center of Excellence at the National Composite Center (NCC, Dayton, Ohio) is in the midst of a two-year effort to develop optimized SMC recipes that, the Center hopes, will be capable of yielding finished parts with a specific gravity as low as 1.2.  As part of that program, the Center is conducting research on several “green” materials technologies that it expects will help manufacturers reduce material weight in automotive composites.

One area of study is centered on fillers. Although several powdered minerals are widely used as filler in SMC — including talc, limestone and calcium carbonate — the most used is the latter, which accounts for 55 percent of the SMC filler market. Therefore, the Center has focused recent efforts on finding a bio-based replacement for calcium carbonate. The goal of this phase of research is to find a bio-based material that will reduce finished part weight by as much as 30 percent.

Leading the research is NCC scientist Dr. Rujul Mehta. He reports that the Center is currently assessing soybean meal, corn-based solids, rice husks, kenaf, silica platelets and recycled cellulose, with special attention paid to soybean meal. (The Center’s research is sponsored, in part, by the United Soybean Board, Chesterfield, Mo.).

Early results are encouraging, Mehta says, noting that, to date, the center has demonstrated potential weight savings with soy-based filler of about 30 percent in a polyester-based SMC. Another test of soy, cellulose and kenaf fillers demonstrated a 22 to 36 percent reduction in specific gravity compared to calcium carbonate. Because of the specific gravity reduction, he says, the center can replace calcium carbonate volume-for-volume, rather than weight-for-weight. This, says Mehta, allows filler loading to be selected independent of final density considerations.

Some technical challenges remain, however. The water take-up of SMC with soy-based filler is about 5 percent, compared to less than 1 percent for SMC with calcium carbonate. Mehta also says that elastic modulus of calcium carbonate-filled SMC is 14 GPa vs. 10 GPa for soy-filled SMC. Similarly, tensile strength drops from 85 GPa to 79 GPa, and apparent shear strength drops from 19 MPa to 18 MPa. Mehta says sizing agents are being evaluated as a way to recover some of the lost modulus.

Mehta reports that real-world automotive applications based on the Center’s research are already in the works and should come to light early this year.